Oregon fans greet their starting lineup before the game.

"I think the word is just amazing," Jackson said after Oregon's 81-72 win over cross-state rival Oregon State in the series fittingly labeled the Civil War. "A lot of us when we got here this morning we were like we really couldn't sleep well because we were just so excited to be able to play in front of all these fans in this awesome arena. It's just kind of unreal in some ways. It's just a great opportunity."

The old McArthur court at the University of Oregon certainly had it's charm - when the crowd really got amped, you could almost feel the wooden structure rock. Yet even with all the charm and nostalgia one basketball arena could muster, Mac Court had nothing on state-of-the-art Matthew Knight Arena. At the very least from a media perspective, it was nice just to have a little leg room on media row without overzealous fans kicking you in the back.

But for the players, the new facility means they no longer have to yearn for accommodations comparable to that of their opponents. 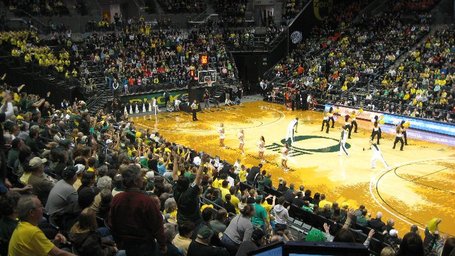 "Amazing - like I was not expecting all of it like this," Oregon senior Kristi Fallin said when asked about the pre-game introductions in particular. "It's funny when we travel and go other places all these other schools have that. So the whole time we'd be all, ‘OK, we're gonna get that soon, we're gonna get that.' And when it finally happened it's like, ‘Oh my God - it's finally here.'"

And with a Pac-10 women's basketball record 12,320 fans filling the new arena by the bus load all the way to the brim, the moment they'd finally been waiting for certainly didn't disappoint on the surface.

"It was awesome," said Portland native and Beavers freshman Alyssa Martin, whose father, Earl, played basketball at Oregon State in the late 80's. "A once-in-lifetime opportunity to play in a stadium with a crowd this big. So I had a lot of fun."

On the other hand, perhaps the atmosphere did fall a bit short of what players might have imagined while they were struggling to sleep last night - there were long periods of silence from the sellout crowd, either muted by the acoustics of the rather expansive building or by Oregon State's methodical play that kept the Ducks' fast paced offense under wraps. Nevertheless, just walking onto the floor in this type of atmosphere was exciting for everyone involved, even to the point that the teams almost evenly split 22 turnovers in the first half.

"You kind of have to pinch yourself," Fallin said when asked what being a part of the record attendance meant to her. "I never thought in a million years I'd play in front of like 12,000 people. And, I don't know, it's just exciting to know that we have that much support."

And don't even bother worrying about whether that gaudy attendance number is real - they might have needed a reminder or two to get really loud, but when asked to make some noise by the large telescreens overhanging center court, you could feel every one of them. Perhaps it will take awhile for the crowd to realize the full power of their numbers, but when they really got into it they quickly took the noise meter shown on the center screens from "study hall" levels to over "wicked loud".

"I thought they were cheering for me that one time when all the noise went up," Oregon coach Paul Westhead joked after the game. "I said no, that's a noise factor barometer or something."

Sure the crowd got the loudest in the rather contrived moments when they were asked to make some noise and had among their longest sustained ovations when the record official attendance was announced with just under four minutes left in the game. The students are still getting used to their new section across from the benches at mid-court and did their job of mostly standing, even if they weren't quite in top form yet.

In fact, it wasn't really until about halfway through the second half when the fans seemed to finally get comfortable in their new digs - when they started chanting "Let's Go Ducks!" late in the second half, the noise level got somewhere near what the arena's noise meter might have considered "wicked loud" without necessarily being egged on by a screen.

"Obviously, we talked a lot about it this week," Oregon State coach Scott Rueck said when asked about preparing his team for the game. "Just weathering the storm of the emotion today; being able to communicate on the floor when we might not be able to hear, which was the case at times and I was really proud of our team for the effort."

That's the type of home court advantage atmosphere every women's basketball program wants yet everyone outside of Knoxville, TN or Storrs, CT can only fantasize about, independent of the capacity limits. It's the type of energy that almost has to excite any basketball fan.

"This is like a God send to me," Westhead said. "You walk out there and you see all these people cheering the Oregon fight song. It just puts thrills up and down you. It's incredible. And if I'm feeling it, they have to be feeling it. I did turn to one of my assistants, Kai Felton, and I said, ‘If this doesn't get you excited, what is?' It was spectacular."

And although Westhead is only in his second year at Oregon, he is also experienced enough to know that they can't automatically expect sellouts for every women's basketball game to come, which certainly poses a challenge: how can they sustain this energy, particularly with the fourth-ranked Stanford Cardinal coming to town? 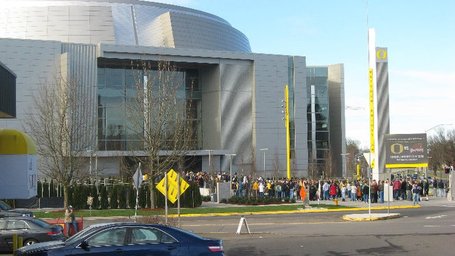 "Well, I know if we lost we wouldn't get ‘em back," Westhead half-joked when a reporter asked how they get these 12,000 basketball fans back for their games. "I think high quality basketball - playing well, playing your hearts out. You obviously can't guarantee you're going to win every night, but you have to say if you show up we're going to give you a high quality game. I think the pace of our game helps fans enjoy the experience. But ultimately, winning really, really helps."

Attendance tends to be a topic of discussion among women's basketball fans a bit more often than men's fans and for good reason: it's a measure of health for a game that is still relatively young and people need to show up to pay the bills at the pro level and, to some extent, to legitimize the resources spent at the collegiate level. So the fact that $2 tickets might have inspired people to show up to experience the arena on the cheap is somewhat irrelevant - it's still an important step forward, if only symbolically, for the program as a whole.

"I just can't believe that we had so many people come to acknowledge," Westhead said. "And they did it for our team, but I think they did it for Oregon Athletics to say we're behind this program. So that was great."

And as much as it meant for the University of Oregon's program, Rueck noted that the attendance and the atmosphere overall for a women's basketball Civil War is a promising sign of growth statewide.

"It was awesome," Rueck said. "The neat thing for us today is coming in, hostile yes. Most of them Duck fans. But it was neutral out there a little bit - there were a lot of just basketball fans. A lot of high school teams from the state were there today. So I thought today was about, obviously, them kicking off this building, which is just a really nice place. No question - can't deny that...but the atmosphere today was just a blast to be a part of. No other way to say it. Basketball in this state, women's basketball in this state, is as big as it is anywhere, from high schools, from middle schools, elementary kids up. So I thought today celebrated that. So for women's basketball in the state this was a great day."

For all the manufactured noise throughout the women's basketball team's first game in Knight Arena, there's something to be said for Rueck's point - the crowd included everyone from alums who had been attending games since the program's inception to young girls with apparel sporting the names of their club teams. It can be a leap of faith to believe that women's basketball in the U.S. is truly growing in places like Eugene, so opportunities to celebrate the growth of the game as a whole instead of individual wins and losses are somewhat special for those that actually put effort into advocating for women's sports.

Even with the intensity of an intra-state rivalry in the air, there was clearly something larger at work that anybody who follows the game closely could appreciate.

Photos of the Knight Arena and the crowd.