Our fearless leader Q (from Seattle) has the break down of Sue's play over at SB Nation Seattle, but for those curious here's a bit more on what happened. Specifically, what went wrong for the Mercury.

Before we start tearing apart the Mercury defense however, lets just open with a quote from Lauren Jackson talking about how the Mercury were able to "contain" her in Game 2.

And we will leave it at that before moving on to demonstrate how the Mercury defense failed when it mattered most.

To quickly recap, the game was tied at 88 with the Storm in possession and about 23 seconds on the clock. Bird had just blocked Temeka Johnson's shot and rebounded the ball on the other end to keep the game tied.

Yes, Sue Bird got a crucial end of game block and rebound. That doesn't happen every day. Making a clutch three, however, is very much expected.

Here's how it went down.

On the final play, the Mercury were supposed to be in "Green" which means they switch everything.

When Jackson set a screen on Bonner, Smith was supposed to switch on to Sue but didn't which gave Bird time to catch and cleanly turn, face the basket and set her feet. Bonner closed out as much as she could to contest the shot but as we all know, Sue Bird makes those shots. The mistake was between Tangela and Bonner not switching the screen.

That much is clear based on what we saw and what Coach Gaines said after the game. He hadn't seen the replay yet however, so specific blame wasn't assigned.

The play starts with Tanisha Wright holding the ball high to run down some clock. She then uses a Camille Little screen to initiate the action. The Mercury (Taurasi and Dupree) immediately switch the screen which denies Wright any kind of space.

At the same time, Sue Bird (being guarded by DeWanna Bonner) breaks to towards the ball as Lauren Jackson sets a screen on her. 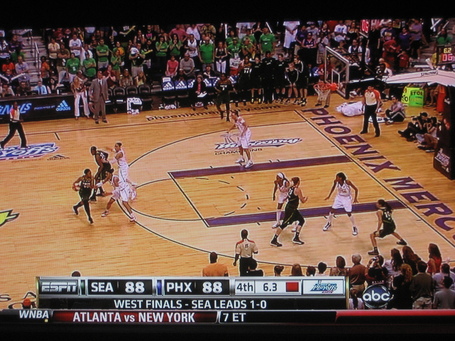 At this point it gets a bit murky but it seems like Bonner hangs back (instead of trying to lock and trail Bird around the scree) and prepares to accept the hand-off of Jackson from Tangela Smith.

You see how Bonner is back on her heels in position to intercept Jackson. 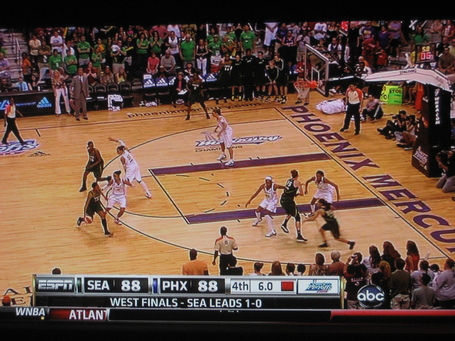 Somewhere in a split second (about .3 seconds per the clock visible in these screen shots) confusion sets in.

In this next shot you see Smith starting to move back to follow Jackson and Bonner stepping out towards Bird. By this point the fate is all but sealed. 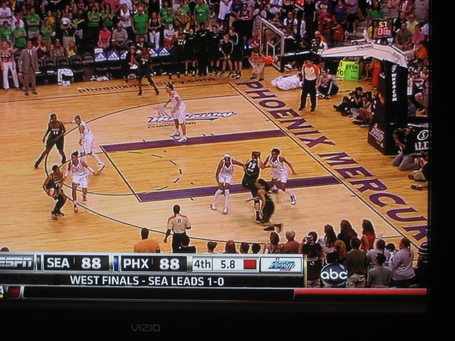 Here it seems like Smith has a change of heart and is trying to hand Jackson off to Bonner but Bonner has already started her acceleration towards Bird.

Obviously, this is happening very quickly in real time. 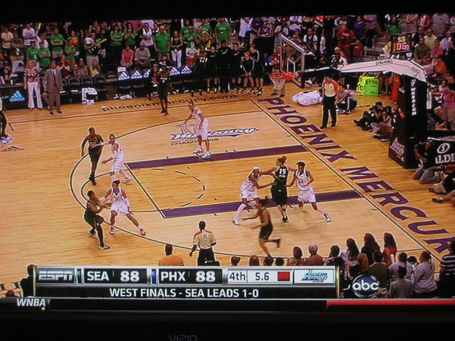 At this point the ball is in the air head towards Bird who is wide open to receive the pass. Bonner isn't close and by now Smith is moving in the other direction. 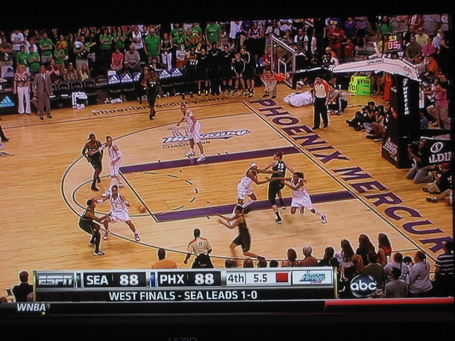 Bird has now caught the ball, squared to the basket and set her feet. Bonner covered a lot of distance quickly (because that's what she does) but is still several feet away from Sue who is already into her shooting motion. 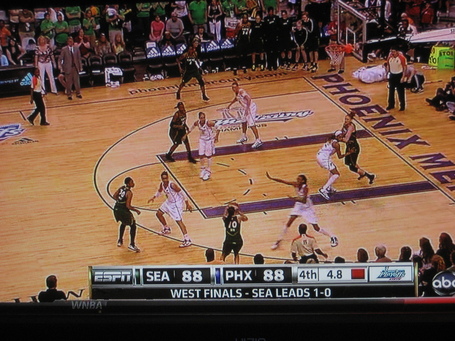 By the time the shot is being released, Bonner does her best to get high and (according to Bird) forced Sue to change the trajectory of the shot giving it a lot of arc. 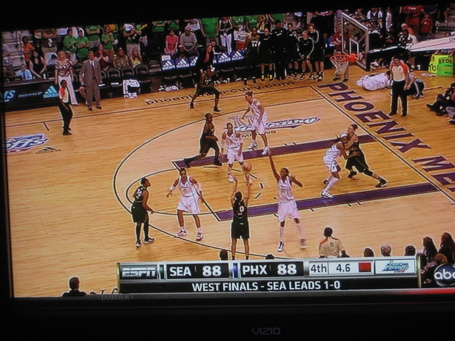 "We were in an all-out switch which we've been doing all year. I have no clue how she got open. Obviously, we didn't switch and she's probably the last person you want to leave open. She hit a big shot," Taurasi said about the play after the game.

I didn't speak to either Bonner or Smith about the play and it's likely we won't get a chance to hear from them either.

"At the end I don't think they were really running an offense. It was more coming down, probing, trying to get something off the pick and roll. They get offensive rebounds, put backs, another shot, you've got to scramble now - it's a scramble mode - you're not really in any kind of defense where you can have something set and they hit shots."

Dupree said about the Storm end of game offense which was really more them just attacking quickly and giving the Mercury defense a taste of it's own medicine.

Ironic that the Storm come-back was fueled by running and a chaotic attack as opposed to their normal controlled half court execution. It says a lot about the Seattle team that they were able to play this way. Wright, Little and of course Cash played great during that stretch.

"I would hope that it didn't. It's something that's happened all season long. I know at one point we had five fouls and I think they had one but you can't let that stuff get to you. You've got to keep attacking offensively and just try and play smart on defense," Dupree said.

On last note on Jana Vesela.

Lauren Jackson picked up her fourth foul early in the third quarter and sat with about 6 minutes remaining. Willingham and Vesala came into the game.

With Jackson off the floor, the Mercury immediately went to Kara Braxton in the post against the much shorter Willingham. Vesela however, was fantastic with her help defense. Timing her traps perfectly so Kara couldn't pass out.

Jana had two blocks, two steals and two rebounds in that six minute stretch and the Storm cut six points of the Mercury lead while Lauren sat. That was a huge stretch in the game. If the Mercury had taken advantage of Jackson being off the court and stretched the 16 points lead to 20 or 24 they probably would have won the game.