Dishin & Swishin with Kara Braxton: A Shocking Season for Sure

Share All sharing options for: Dishin & Swishin with Kara Braxton: A Shocking Season for Sure 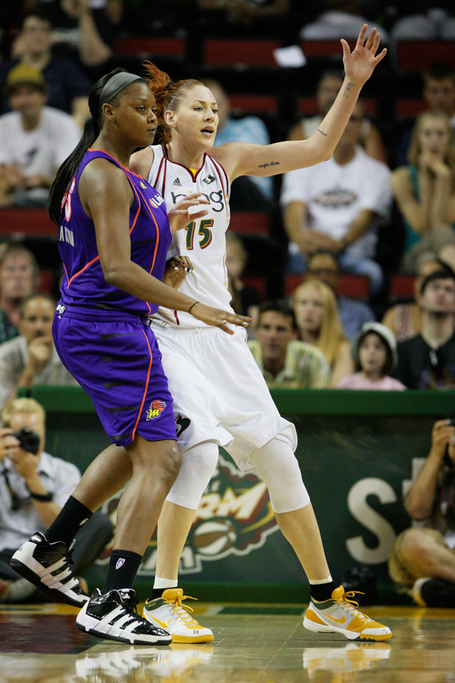 Imagine you've got multiple championship rings, and you suddenly find yourself with a completely new team, a new bunch of teammates, new coaches, new colors....and you haven't been traded or left via free agency!  Then it all happens for a second time, only this time you are traded.  And somehow through all these changes, you find yourself in the familiar place you love, the Playoffs!

This is the bizarre summer of 2010 of Kara Braxton, who finds herself now poised for the Western Conference finals as a crucial part of the Phoenix Mercury.  From Detroit to Phoenix, with a side trip through Tulsa...to quote Jerry Garcia, what a long, strange trip it's been!

I had a chance to talk to Kara as she was preparing for her first WESTERN conference final after seeing several with Detroit.

The Mercury are an uptempo, running team.  They thrive on speed, quick hitting offense.  Kara Braxton is more of a...well, um....let's just say she's not known for her speed.  At 6'6" Kara is an inside presence, but the Mercury have taken advantage of her good hands, excellent passing ability and physical nature to make her an important part of the team when she is in the game.  I asked her about adjusting to joining a team that had defeated her in the WNBA finals a few years back.

Dishin & Swishin: Kara Braxton on the Adjusment of Going to Phoenix

In the Western Conference finals, the Mercury will take on the team with the best record in the league, the Seattle Storm.  The Mercury have played the Storm as well as anyone this season, but the Storm do boast the MVP of the league in Lauren Jackson, and a bunch of other weapons.  So what do the Merc have to do per Kara to win?

Finally, I had to ask Kara about the front row seat she had for the changes that went on with the Shock franchise.  She expressed her feelings to me about watching the changes in the once proud Detroit franchise, as it evolved into the Tulsa Shock we saw at the end of the season.

Dishin & Swishin: Kara Braxton on the Dismantling of the Detroit Shock