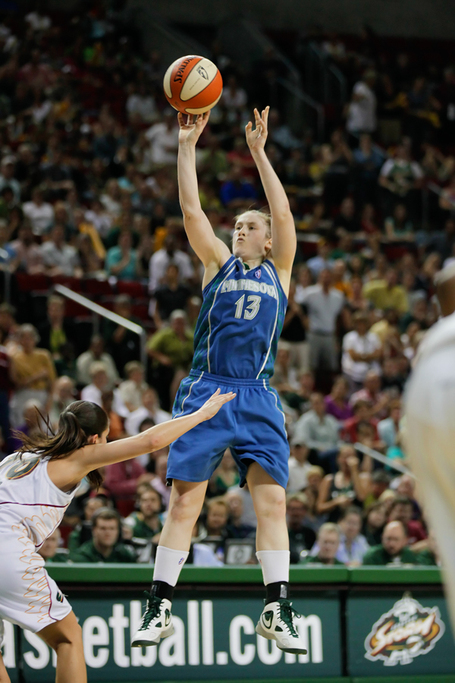 The rumors are that the selection committee of the USA National Team have long memories, and that if you've ever done something to anger them, or ever skipped a session you were invited to, you most likely will never be selected for a major international competition.

Well, those rumors may very well be put to rest in the next few days, as Minnesota Lynx point guard Lindsay Whalen, who had the audacity to get married and skip the invite to a previous national team camp, fights her way towards one of the few remaining spots on the United States team for the World Championships.

Whalen is looking and playing great; she appears to be in great condition, and last weekend in Hartford vs. the Australian and Spanish national teams she played two very strong games. She was actually one of the team's leading rebounders from the point guard spot, and she has been working with the coaches to improve her jump shot, increasing the rotation and putting more snap into her wrist. Lindsay's strength and physique are assets as well, as the physical nature of the international game is geared more towards strong guards.

Lindsay is not a lock by any means, in fact other than Sue Bird and Diana Taurasi, it's difficult to say any guards are locks. Should Auriemma's comments about Cappie Pondexter not going to Europe be true, there will be another opening to be filled. The final candidates are Whalen, Kara Lawson and Renee Montgomery of the Connecticut Sun, and Lindsey Harding of the Washington Mystics.

So what does Whalen have to do to make the team? I asked her just that question, what is she doing in practice with such a small window of opportunity to make this a reality.

Dishin & Swishin: Lindsay Whalen on the Push to Make the National Team

This summer was both exciting and disappointing for Lindsay. The excitement of coming home to play in Minnesota, and to play with stars like Seimone Augustus, Candice Wiggins, Nicky Anosike and Rebekkah Brunson soon were tempered by injury after injury suffered by the team, and a disappointing 2-9 start. Still, Lindsay always is upbeat, and talked about the season and getting ready for the future.