Share All sharing options for: Dishin & Swishin: Sue Bird Gets You Ready for Tonight's ESPN2 Game 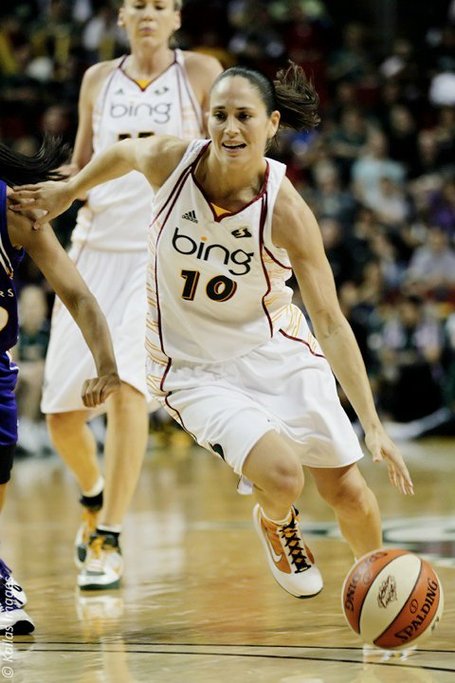 I spoke to Sue Bird recently, right before the Storm went on their mini-skid, for the Dishin & Swishin show.  As we get pumped up for a crucial Connecticut Sun-Seattle Storm game on ESPN2 tonight, what better way to get ready than a few words from the league's best point guard?

So enjoy the snippets, pop some corn, grab the cold beverage of choice, and let's hope for a good one!

The very first question I asked her was about the success the Storm was having, rolling through the rest of the league.  Did Sue know something we didn't?  Because she bristled at the question:

Dishin & Swishin: Sue Bird on How Difficult the Season Has Really Been

Still, you can't overlook the Storm's success, and in typical Sue Bird fashion, she didn't want to talk about herself, but she was more than willing to dish out another assist:

Sue had to throw one more lob inside for yet another assist though, giving a big shoutout to the WNBA's best fans, those crazy Stormies at the Key!

To hear the entire interview with Sue Bird, as well as others including Delisha Milton-Jones, the NY Liberty Legends Roundtable, and more go to http://www.wstrradio.com/dishn-n-swishn.htm