Breaking Down The Mercury Defense

Share All sharing options for: Breaking Down The Mercury Defense

I know, "Mercury" and "defense" aren't exactly words that normally go together, but it was pretty clear last night that this team has made improvements on that side of the floor.

The numbers this year don't show it in large part to the the frequent blowouts as the team was more than willing to rest up for the playoffs and not do the "scrappy" thing and fight for every game when it was clear they weren't going to catch the Storm.

Even last night the final box score numbers are misleading. It shows the Mercury gave up 47.5% shooting to SASS and 62.5% from three but through three quarters before the game turned into a blow out SASS was shooting 39.1%.

Credit to the San Antonio roll-players Hodges and Lawson-Wade who combined for 6-9 from three. The Mercury game plan was to focus on Hammon and Young and make those other role players hit shots. They did, and did so at a rate well above their season averages. That's not bad defense, that's players stepping up.

Becky was 2-for-7 through those first three quarters and Sophia was only 4-for-11. Defensive game plan accomplished.

Penny Taylor was certainly impressed with her team who barely (if at all) had to play their Rover zone which was a fall back position for so many years:

Mercury Defense Fuels Separation - SB Nation Arizona
"That's our aggressive D. I haven't seen us play D like that before, being really up and in people and then having the rotation on the second and third passes. I think we did a great job of that," Taylor said.

Good defense is about being aggressive, playing with effort, knowing your rotations, and most importantly trust. Last year I asked the Indiana Fever what made them such a great defensive team and that's exactly what they talked about:

Fever vs Mercury: The Trap is Set - Swish Appeal
To summarize the Fever's defense: Commitment, trust, and accountability in a system based on pressure, disruption and a variety of schemes to keep the opponent off-balance all leading to points off turnovers.

Trusting that your teammates are going to rotate properly behind you gives you the freedom to attack the ball aggressively. That's exactly what we see in this play from last night's game.

This play starts at a SASS high pick and roll with Becky and Sophia. 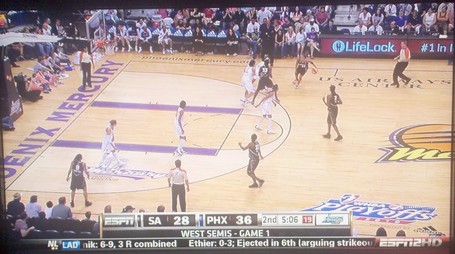 Knowing that the Mercury have been trapping Becky hard to prevent her from getting anything going off the dribble, the Silver Stars try and take advantage of the aggressive Phoenix ball defense by having Sophia slip the pick.

You can see her here at the top of the screen rolling wide open to the basket while her defender (Dupree) and the Mercury point guard throw a hard trap on Becky. 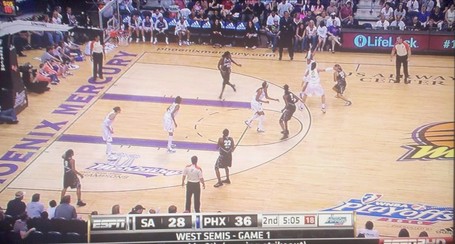 The two on-ball defenders trap well which forces Becky into a tough bounce pass that's slower then a more direct throw to Sophia. (Becky's lack of height doesn't help her here either).

By the time the ball gets to Sophia, two Mercury defenders (Bonner and Smith) are rotating to Young and Dupree is rotating behind the play to cover the open player at the top of the key. 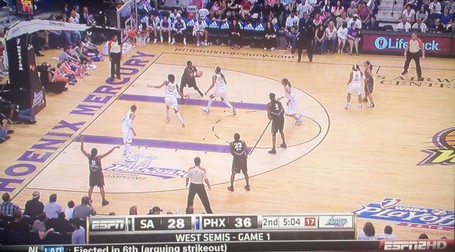 Young ends up getting her shot blocked by Bonner which results in a run-out for Phoenix and a bucket on the other end. Young rushed her shot and could have done a better job selling the up-fake but she was clearly covered as a result of solid defensive principles. 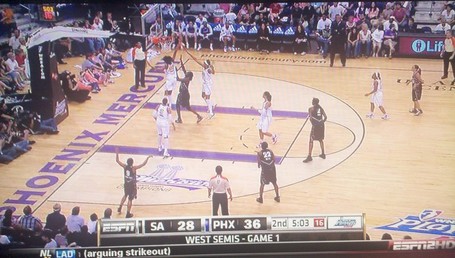