Share All sharing options for: Dishin & Swishin: Planning An Upset...Dan Hughes on the SA Silver Stars 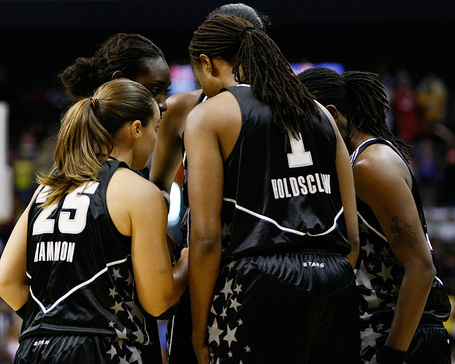 You're a successful coach, with an extensive resume. You've been in conference finals, you've orchestrated last second wins and presided over blowouts. You're ready for a new challenge, plus the WNBA cuts the amount of assistant coaches you can have per team from two to one. This is difficult for you, because your assistants are not only husband and wife, but one is pregnant. So what do you do? If you're Dan Hughes and the team is the San Antonio Silver Stars, you give up your head coaching position to the husband and wife tandem and hope things work out.

It might have been a big success if the All-Star center (Ann Wauters) had decided to play in the WNBA this year, or the veteran, stabilizing guard (Vickie Johnson) and the high energy forward (Erin Perperoglou) hadn't retired. Instead, the Silver Stars were left with a new head coach, and three new starters. A daunting task, but here they are once again, in the playoffs.

So can they pull off the upset? Can they knock off the defending champion Phoenix Mercury?

When I spoke to Dan Hughes, the Stars were facing the last two games of the regular season, but it was pretty clear they were headed into the playoffs, with a date with the Mercury in the first round.

The first question I asked Dan was about his coaching tandem. There has been unrest among San Antonio fans I have talked to; a feeling that the coaches were somewhat disorganized, and underachieved. I wanted to know, was GM Dan Hughes satisfied with the performance of his coaching staff.

Dishin & Swishin: Dan Hughes on Being Satisfied with the Coaches' Progress

The Seattle Storm, under former Hughes assistant Coach Brian Agler has compiled the best record in the WNBA, and Agler is a leading candidate for coach of the year honors. Previously, Agler had won championships in the ABL, and prior to leaving for Seattle had taken over for Hughes for an extended period while Hughes was unable to coach. So, since hindsight is 20/20, any regrets in not moving to GM sooner and having Agler coach the Silver Stars?

The West has been loaded with change, injuries, and turmoil. The conference overall, with the exception of course of the Seattle Storm, has disappointed with their record vs. the East, and overall performance. Hughes talked about the difficulties associated with changing and evolving rosters, and players trying to learn each others' games.

If there is a constant in San Antonio, however, it's their two stars, Becky Hammon and Sophia Young. Although things are a little different this year. With some obvious nagging injuries slowing Hammon down some, it's clear that it's Becky helping Sophia this year, not the other way around. And Young has proven, several times over now, that when the game is on the line, she is a master shot maker. I asked Dan about his duo.

Which brings us to the bottom line...can the Silver Stars defeat the Mercury? Most people seem to feel the answer is no. I disagree. I like the way the Silver Stars are playing, and new additions Crystal Kelly and Ashley Battle are giving the team strong minutes off the bench to assist the starters. It does seem like be it the NBA or WNBA, these two cities are going to square off and you never know what's going to happen! So what does Dan Hughes think about the defending WNBA champions?