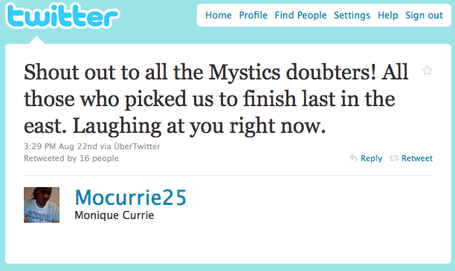 Let's have a moment of honesty in a world where revisionist history seems to be easier, if not overwhelmingly dominant.

I didn't think the Washington Mystics had any sort of realistic shot to win the Eastern Conference. And that's probably true for most thoughtful basketball fans in the world because in a crowded conference, there really wasn't any basketball reason to think that the team that lost an All-Star would take a conference in which multiple teams added All-Stars.

In an attempt to dodge Mystics forward Monique Currie's laughter, perhaps you think it sounds better or more authoritative now to say that you knew it all along. Perhaps you claim that you knew that Currie would vault herself into the MVP discussion and more than adequately replace injured star Alana Beard as the team's go-to scorer, that 2009 WNBA Most Improved Player Crystal Langhorne would improve again and become a better defender, or that Lindsey Harding would hit a clutch shot to clinch first place on the final weekend of the season. I would love to hear your off-season reasoning for that because unless you were in the locker room with the team, it strikes me as highly unlikely that you actually had any actual evidence to back any of that.

You might not have picked them last, but nobody I know could have reasonably expected them to win the Eastern Conference either. The only way one might have known is by being in their locker room.

"I don't think you know exactly how it's all going to play out 1-2-3-4 whatever, but I think we understood that we can play with anybody, we can compete with anybody if we did the things that we all needed to do," said guard Katie Smith. "Each team has their own identity and their own way, but we really found our own way and how to go about business and I just feel like we believed in ourselves, we believed in what we were doing and we just wanted to go out every night and compete. And it's just one game at a time. And I think inside the locker and in our organization we knew we could play with people. And that's all it took."

Now with home court advantage in the Eastern Conference playoffs, you have to imagine that the Mystics are no longer the true underdog even if we can argue about who's the favorite in a very crowded conference. Nonetheless, after handling the Atlanta Dream quite well on Sunday, the Mystics should be considered the favorites in this series.

What the Mystics have to do to win

The biggest advantage the Mystics have had over their opponents this season is their offensive rebounding ability which has led to a league second best 14.12 second chance points this season while allowing the least second chance points at 9.91 a game. However the one thing the Mystics have struggled with in the second half of this season is turnovers, having one of the highest turnover percentages in the league. Given that Atlanta leads the league in points off turnovers, it will be essential for the Mystics to take care of the ball.

What the Dream have to do to win

Believe it or not, these two teams are extremely similar in terms of strengths and weaknesses -- the Dream are 1st in second chance points and 2nd in second chance points allowed while they thrive on points off turnovers with 18.38 a game. They do give up a lot of fast break points (10.35) but outscore their opponents in the open court (13.79). Where the Dream have struggled in the second half of the season is just in making shots -- they had among the lowest effective field goal percentages in the league primarily because they had the least threes made and attempted. If they're not hitting from the perimeter, it's much easier for opponents to pack it in on their post players; that helps to understand why Erika de Souza and Sancho Lyttle are scoring less in losses, with Lyttle's field goal percentage dropping 5%.

It's difficult to imagine the Dream laying another egg at home again and if they can withstand the Mystics defense and force turnovers, a win to extend this to three games is certainly possible. Ultimately though, the glaring three point shooting weakness spells trouble for the Dream in a series of otherwise closely matched teams.