Dishin & Swishin: As the Playoffs Begin, Donna Orender Speaks Out

Share All sharing options for: Dishin & Swishin: As the Playoffs Begin, Donna Orender Speaks Out 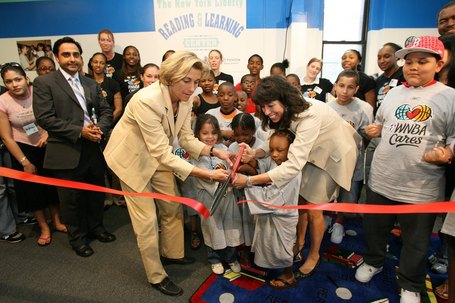 WNBA President Donna Orender Enjoying One of Her More Pleasant Jobs, interacting with the fans of the WNBA at Public Service events (photo courtesy of NBA Photos and the WNBA)

It's been the best of times, and the worst of times.  There's been growth in corporate sponsorships and TV ratings, drops and growth in attendance, folding of franchises, and relocation and expansion franchises.  But most importantly, the league rolls on with a rabid core fan base that couldn't imagine a summer without WNBA basketball.

On the eve of the 2010 Playoffs, I spoke to President Orender on a myriad of on and off the court topics.

The league has changed considerably since President Orender took over.  Lisa Leslie, the Comets, Monarchs and Detroit's version of the Shock are gone.  Tina Charles, the Dream, the Sky and the Tulsa Shock are here.  So how is the quality of play today?

Dishin & Swishin: Donna O on the Quality of Play in the WNBA

Still, the league needs to improve and it cannot be allowed to stagnate; it needs to grow.  A great step is the individual team sponsorships, led by the Phoenix Mercury and Lifelock.  Corporate sponsors like Jamba Juice add to the bank accounts of the league, but it's the fans themselves that need to grow the league by buying tickets.

While economic realities are everywhere, including the WNBA, they impact teams and players in many ways.  Coaching staffs have been trimmed, budgets reduced, and the biggest issue, of course, is the small roster size.  The players are taking quite a pounding playing year-round, and the short bench only increases the demand on their bodies.  Diana Taurasi sounded the alarm about taking time off from the WNBA and playing only overseas.  Her new contract with Phoenix eliminated the issue for now, but what does President Orender think of these items?

One of the big stories of this WNBA season was the move of the Detroit Shock to Tulsa, and the restructuring of the franchise by GM and Coach Nolan Richardson.  While the former Shock fans were unhappy with the fate of their franchise, I wanted to know what President Orender thought of the Tulsa move, and if it can be considered a success despite their final record.

Dishin & Swishin: Donna O on the Success of the Detroit to Tulsa Move

Another big story, and perhaps the biggest in terms of publicity for the league, was the decision of President Barack Obama to take his daughter and a friend to attend a Washington Mystics game.  This was the first time a dignitary of the magnitude of the U.S. President has gone to a game, and he wasn't just attending the game, he was INTO it!  The pictures that were splashed across the internet of the President cheering on the Mystics were priceless.  And signing a couple of Mystics jerseys that were auctioned off for Breast Health Awareness was a great gesture in itself for President Obama.  I asked President Orender about that "other President."

When I started doing Dishin & Swishin at the beginning of this year and then started working with Swish Appeal, I couldn't imagine that I would get the opportunity by the end of my first WNBA season to talk to the President of the league.  What I hadn't counted on though was the decline in print coverage of the WNBA, the rise of social media like Twitter and Facebook and the emergence of the role of the blogosphere like SB Nation in advancing the coverage of the WNBA.  The WNBA has embraced these venues as a way for its fans to connect to each other, the teams and the players.  President Orender talked about it with me.

Dishin & Swishin: Donna O on the Use of Social Media & the Blogosphere in WNBA Coverage

Finally, with so much happening in the league this season...the strong play...the records broken...the sponsorship growth...I asked President Orender two final things. First, when you look around the WNBA what makes you proud of the league?  Second, what is the one thing you would like to tell the fans of the WNBA directly yourself?  Hear the answers for yourself.

Dishin & Swishin: Donna O on What Makes Her Proud & A Statement Direct to the Fans