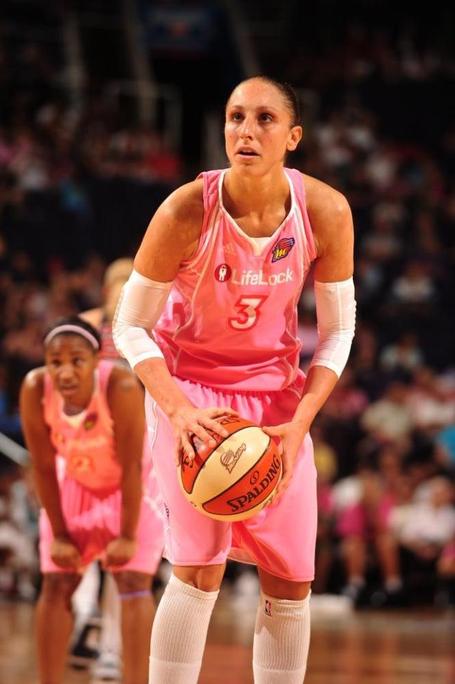 The WNBA has just completed their Breast Health Awareness initiative, and it was a rousing success, raising money with an online auction of signed basketballs for the Kay Yow/WBCA Cancer Fund.  In addition, individual teams conducted local auctions of signed uniforms, shoes and other items to raise funds for local breast health resources and clinics, such as Susan G. Komen for the Cure.

In a "tweet" conversation during all of this, I was lamenting to Phoenix Mercury COO Amber Cox that I was in Connecticut, and would not get an opportunity to bid on distant team's pink jerseys or other items, and that was unfortunate.  I kept thinking, how much money would a Diana Taurasi signed pink jersey raise for charity if UConn fans could get in on the bidding?  Well, Amber agreed with me, and we decided that Mercury Community Relations Guru Lesley Factor and I should brainstorm.  The result is what we are proud to present to you now.

On Thursday, August 12th, the Phoenix Mercury, Swish Appeal & the Dishin' & Swishin' show on WSTRRadio.com are partnering up to promote a Twitter auction of a SIGNED, AUTHENTIC PINK DIANA TAURASI JERSEY.  A portion of the proceeds will go to the Kay Yow/WBCA Cancer Fund.

Continue on to see how to get a chance at this special item!

Here's how it will work:

- The starting time for the auction is Thursday, August 12th at 10 am PT, and it will run for only 2 hours
- We will start the bidding at $200
- For bids to count, you need to tweet your bid, and you MUST include the hash tag #DT3forYow.  If it doesn't have that hash tag we won't know about the bid!!
- The highest bid at Noon PT on Thursday, August 12th will win!

We wish you all the best of luck, and please, support the cause, and bid early and often on this limited edition item!