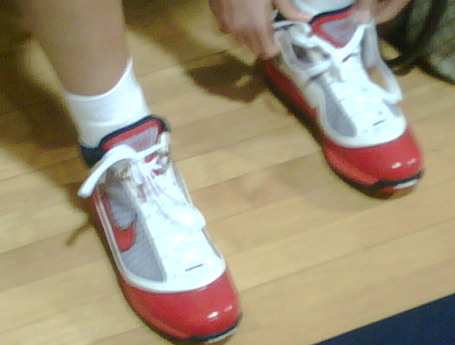 The compressed schedule of the WNBA and the complexities of juggling international schedules of women's players has put USA Basketball in the difficult position of having to put together the Senior National Team "on the fly" for the World Championships this fall.

Yesterday at Connecticut College the majority of those auditioning for roles on the team gathered for the first time since April, when many present currently were still playing in Europe during this year's earlier meetings.  The goal of Coach Geno Auriemma and his staff? Attempt to put together a championship team with minimal practice and minimal time together.

Adding to the complexity is the fact that the "All Star break" features two regular season games yesterday, and one on Sunday sandwiching the USA vs. WNBA All-Stars game, depriving some invited players (Tamika Catchings, Ebony Hoffman, Seimone Augustus and Sylvia Fowles to name a few) of a full camp.  Add in that some of the players literally arrived from the night before's games (members of the Sun) and went straight to USA Basketball's gathering, and some were delayed by traffic (members of the Liberty).

Still the excitement could be felt when the team gathered in the gym, and went to lace up their brand new USA Basketball kicks for the first time yesterday.  Some players hadn't even gotten their uniforms yet and needed to pick them up at the gym, but you could tell how much they were looking forward to getting on the court, and how much they were enjoying visiting with their "teammates."

Once they got on the court, Mr. Iverson would have been disappointed.  In a gym that had me sweating just asking questions, these ladies were all business, and the effort showed why they were there in the first place.  Unfortunately, after routine drills, they closed practice to the media.  So I can't describe any more for you.

But....since so many of you had so many great comments on my UFC101 piece, here is Sparks Coach Jen Gillom talking about the return of Candace Parker, the remainder of the Sparks season, and yes, DeLisha Milton-Jones and the "LJ incident".  Enjoy!