For Tulsa, "chemistry is one thing about this team that's not an issue"

Share All sharing options for: For Tulsa, "chemistry is one thing about this team that's not an issue"

Night after night, game after game, the Tulsa Shock continue to struggle.

The last three have been particularly rough, first allowing Phoenix to score a then WNBA record 123 points in a 32-point loss. A one game road trip was up next, a 16-point loss in Seattle on Sunday, that was quickly followed with Tuesday afternoon's 16-point loss to Atlanta after being down by as many as 30 in the first half of play.

Intertwined in this losing stretch were two more trades and further talk by fans and commentators alike about the lack of team chemistry contributing to the on-court losses. And a tweet by Kara Braxton after Detroit teammate Alexis Hornbuckle became the final piece of the team from Detroit to be traded away seemed to add more fuel to the proverbial fire. 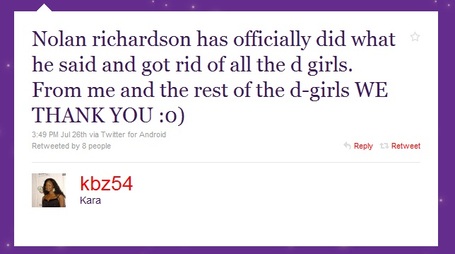 After the latest letdown, the frustration of failing to produce victories was evident in the faces and words of the players and coaches alike. There are now just five Shock players that have been with the team since the first tip, but the strong bonds that are shared in the locker room and beyond show through the pain that comes with losing, both on the court and on the roster. After talking with two in this group of five in Shanna Crossley and Marion Jones a different picture of this issue emerges than some others have been working hard to paint.

How do you cope with such a proliferation of losses - of both people and games?

Marion Jones talked about the on the court losses and the struggles that go with them.

"It's a challenge. As coach mentioned in the locker room, this is probably more losses than any of us have experienced any time in our career and that's so true," Jones reflected. "But he also said that, you know, the top teams in the league when they started out Seattle won five games, Atlanta won four games, so he's like let's get out of that record book . . . you've got to keep everything in perspective. It's been a challenge, I'm not going to lie about that, but we're encouraged."

"It's rough, to be honest. Playing together for however long, it could be weeks or it could be months, but you become sisters," Crossley said. "It's difficult because it's more than just teammates, it's a friendship, it's a sister so that is very difficult to do, but it's a business. They've got to try and find the people they want to be in here, the people that also want to be in here themselves. It's going to be a tough mix to find, but it's part of the business".

So is chemistry the issue?

"Absolutely not, not anymore. Early on with this team, definitely. There's no question about that, but now absolutely not," said Crossley. "The chemistry on the team is - we're extremely close off the court, we're still trying to learn and figure to that on the court. But chemistry is one thing about this team that's not an issue."

"I would put our 10, 11 tomorrow, match them up with anybody else in terms of chemistry. I think if we didn't have that it would be a really, really rough season," said Jones. "When we leave the game whether we win or lose, there's not one person on the team - and I'm not lying when I say this - that I wouldn't like just hanging out with and I think all the girls can say that. We've just got to get through it. We really believe that it will improve and that's not just the standard answer, I really think that. We have faith in what Coach is trying to do."

Did Nolan Richardson intentionally erase the Detroit legacy from the team?

Let's hear it straight from the coach's mouth. "Not at all. I mean, I made them understand that this is the Tulsa Shock and sometimes people or players come and think that you owe them some ownership, you owe them the start, you owe them to play 25-30 minutes, you owe them," said Richardson.

Jones echoes the sentiments that Detroit affiliation has not been shaping the roster.

Richardson knows that there are intangibles in the business of basketball and some of his decision making has been influenced by factors other than stat sheets.

"The worst and hardest thing is to have a team that's not that good in disarray with negativity. I said this many years ago as a coach, I'll take my beatings, but it's gonna be my terms. Once I get the people in place that I need then it becomes my team," and this is exactly what Richardson has been trying to achieve in his first year coaching in the WNBA.

"Right now the players that we have on this basketball team can now say this is our team. Finally, it's our team. Now it becomes we. We've got to do something, we've got to be better, we've got to do better. That's important and you don't teach that. You try to bring people into the program that buy into what you're talking about and work extremely hard to get it done."

Kara Braxton expands on her tweet about the Tulsa Shock before Tuesday night's game in Seattle.