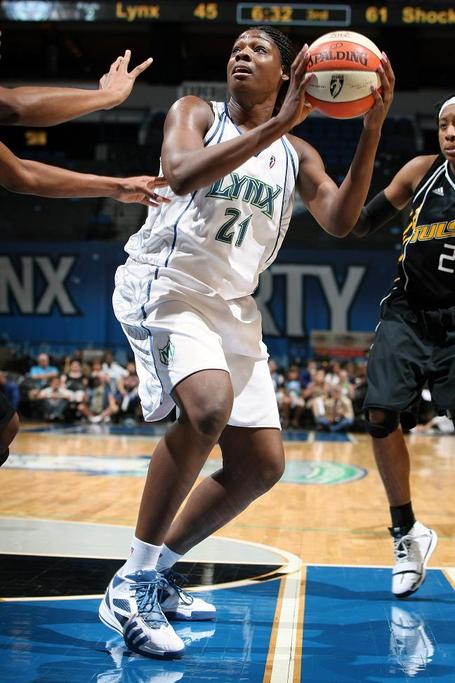 Photo courtesy of the Minnesota Lynx.

When timing comes together, it's a beautiful thing!  On the front page of Swish Appeal yesterday, Q McCall had a piece on the 2010 Minnesota Lynx, their struggles and the fact they have managed to stay alive in the downtrodden Western Conference as a strong candidate for a playoff spot.

This past week, on the Dishin & Swishin show, one of my guests was the talented center of the Minnesota Lynx, Nicky Anosike.  A 2009 WNBA All-Star, Anosike is having a season similar to the entire team.  Inconsistent, flashes of brilliance offset by "how did that happen" games.  Then there's a new coach, new teammates, new responsibilities and new roles.  Yet one thing that hasn't changed is Nicky's attitude and her willingness to sacrifice stats for her team.

So what does Nicky think of this season?

Snakebit.  Cursed.  The LA Clippers of the WNBA.  All can and have been said about the Minnesota Lynx.  Injuries, bad trades...they've all doomed the team to non-playoff status over the years.  Last year they jumped out to a fast start out of the gate before a season ending injury to All Star Seimone Augustus sent the team to the draft lottery.  This year so many people have missed games with injury that as of right now Anosike, Hamchetou Maiga-Ba, Charde Houston, and rookie Monica Wright are the only players on the roster to have played in every game.   Nicky comments on the injury bug swarming the league, and its possible causes.

Dishin & Swishin: Nicky Anosike on Injuries throughout the W

When your local team changes coaches three times in three years, not to mention trading Katie Smith for Chandi Jones, it's understandable that you can feel a little bit jaded.  Players with that winning mentality, like Anosike, coming from Tennessee with those national championships, are trying to change the mindset of the Lynx fans, and win their confidence.  But it sure is tough when you don't have consistency in your coaching and your roster.

Still, they're getting healthier, and they are playing together more.  And as Q said in his article:

But the bottom line is this: although we live in a world of instant gratification when the idea of holding on to a vision of what's to come seems intolerable - unless of course, you're waiting 2-3 years for LeBron James to sign with your favorite team - the next three games could end up giving Lynx fans plenty to be excited about for whenever their team comes together as a full unit again. That's one of the best reasons to watch sports.