Share All sharing options for: Looking at USA Basketball: The Players Speak 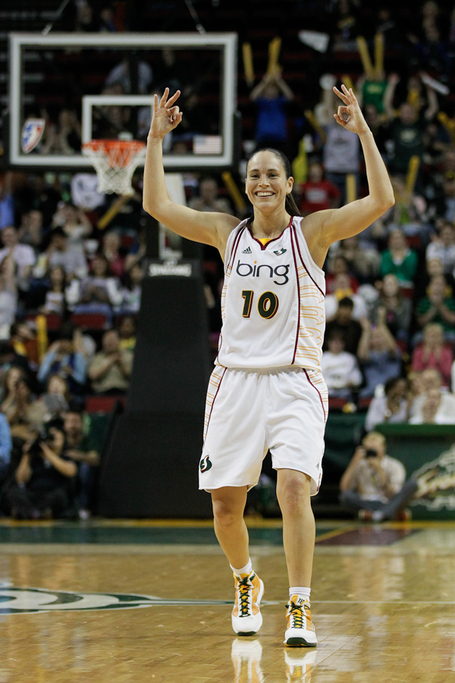 USA Basketball. To the men, sure it means a lot. They want the gold, they want the glory. But they also want their multi-million dollar paychecks. So, in this the summer of the World Championships, players such as Dwayne Wade, LeBron James and Kobe Bryant will all take a pass on playing for the good ol' USA. It's hard to fault them, when you make as much as they do, and you realize how much an injury would hurt them financially.

It's not the same for the women. The NBA money isn't there like it is for the men and, historically, playing for the national team just means something different for the women. There is no one like Teresa Edwards for the men, who won 5 gold medals, in part because playing for the USA was the only way for her to play in this country after college. Edwards, Katrina McClain, and Cynthia Cooper, to just name a few, achieved part of their legendary status playing for USA Basketball when there was no WNBA. Dawn Staley and Lisa Leslie are just two of many who defined their careers with Olympic excellence. Playing for the US Women's Senior National Team means becoming part of a women's basketball legacy that does not quite hold the same meaning on the men's side.

So it's not surprising that USA Basketball means so much to so many. As the pool for selection of the 2010 World Championships roster gathered over All-Star weekend, I was able to ask several players and coaches about what it means, and also the questions hanging over the tryouts: how did the pool get selected? And what impact will Coach Geno Auriemma's UConn affiliation have on the selections?

As I mentioned above, putting that USA jersey on, lacing up the special red, white and blue sneakers....it means so much to the players that get that opportunity. I can't describe the wistful look that comes across the face of the player as they describe what USA Basketball means to them, but I can share with you their own words on the subject.

Dan Hughes, General Manager of the San Antonio Silver Stars is a part of the USA Basketball selection of players. I was able to talk to him about how players were selected to participate in the pool and the July practice session.

The biggest issue, at least among the fans if not the players, is the fact that Geno Auriemma is the head coach at the University of Connecticut, and the pool is loaded with UConn players: Sue Bird, Diana Taurasi, Swin Cash, Maya Moore, Tina Charles, Asjha Jones and Renee Montgomery. What many people are overlooking is the fact that these players, every one of them, is a former All-American and/or national champion. They have also all had a level of success in the WNBA. So is a UConn background an "unfair" advantage to those trying out?

Dishin & Swishin: Swin Cash on if Being from UConn is an Advantage

Dishin & Swishin: Asjha Jones on if Being from UConn is an Advantage

Dishin & Swishin: Angel McCaughtry & Lindsey Harding on if Not Being from UConn is a Disadvantage

One of the things I love about being able to talk to these ladies in person like this, is you get to really see some of their personalities. I learned that Angel McCoughtry, for example, is one of the funniest people I've talked to in a long time. One of my favorite lines from Angel came when I asked her now that she's played against Geno (losing in the national championship game two years ago while at Louisville) and for Geno, which did she prefer.

Dishin & Swishin: Angel McCaughtry on Playing for Geno instead of Against Geno

As for the Coach himself, Geno Auriemma clearly had two difficult situations on his mind all weekend. FIrst, the lack of true centers and height in the USA pool with the loss of Candace Parker to injury. I did ask him about the possible addition of Baylor center Brittney Griner to the USA player pool.

Dishin & Swishin: Geno Auriemma on the Lack of Centers & the Possible Addition of Brittney Griner to the Pool

The second thing troubling to him was the lack of preparation time with all of the players both in selecting the team and also practicing as a unit.

When the USA National team reconvenes in the beginning of September, I'm sure due to various factors we'll have a better idea where everyone and everything stands in the selection process. The exhibition game against the Opals -- the Australian senior national team that defeated the USA without Lauren Jackson playing -- was an eye opener of sorts to the USA Basketball leaders. It was a strong reminder that the United States is not the only country that can field a strong team for the World Championships, and also that under international rules and the international style of play, there is still work to be done.

That said, I'm sure all the parties involved are looking forward to the next step, on their way to possibly returning the World Championship to the United States.