Share All sharing options for: Looking at USA vs. Australia, at Mohegan Sun, 7/11/10 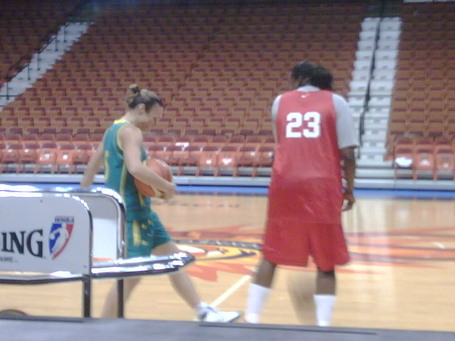 So what did you do with your Sunday morning?  I spent mine at Mohegan Sun, posting in the open thread on Swish Appeal, and tweeting away about the closed scrimmage between the USA Senior National team and the Opals, Australia's senior national team.

I want to take this time to thank my high school typing teacher, because if I had to type all that and look at the keys, I would have missed the scrimmages!  But I was able to see the action, and it was pretty intense at that.  At first that surprised me, but then I realized....if these ladies didn't play with 100% competitiveness or intensity, they wouldn't have been in the arena this day anyway!

The open thread pretty well covered individual details, but I thought I'd take a minute to try to summarize things.

1. Without Sylvia Fowles and Candace Parker, there is a shortage of posts for the USA team.  This is compounded by something I didn't know until Coach Auriemma told me today: Brittney Griner turned down the request to join this group.

2. Sue Bird and Diana Taurasi always know where each other seems to be, and play better together than any duo I can recall in recent memory.  The USA team flows so well when Bird was in the game.

3. Maya Moore can play with the big girls.  Eight points, including on a terrific Harding-Charles-Moore backdoor play.

The Expected, The Opals

1. Penny Taylor is the best player on the Opals with Lauren Jackson out.  She has a flair and knack for making plays.  She can get into the lane so easily, that at one point USA coach Auriemma jokingly yelled to Opals Coach Graf that Taylor was carrying the ball, and "that #7 is cheating."  Coach Graf's reply: "She's been playing in America too long."

2.  The Opals being considerably bigger, outrebounded the USA team 40-27.   Mariana Tolo led the team with 9.

3. Kristi Harrower and Tully Bevilaqua are a quality 1-2 punch at point guard, and when they aren't in, the Opals struggled some.

1. They lost!  Without LJ on the Opals, even without Fowles, Tamika Catchings and Cappie Pondexter I thought the USA would win.  You could see what a difference experience playing together means, especially on transition and help defense.

2. Not all unexpected is bad....Candice Dupree was very impressive, with 10 points (second on the team) and a team high 4 rebounds.  She is silky smooth in the lane, and had a beautiful finger roll over the Opals defense early on.

3. Lindsey Harding made things happen, as both the 1 and 2 guard.  She was one of the best backcourt players for Team USA today

The Unexpected, The Opals

1. Liz Cambage!  I did not expect a 6'8" center who is only 18 years old to be starting for the Opals.  She is very raw, but experience like this can't be matched, and she had a nice little run where on back to back plays she took it right at and over Tina Charles.

3. Abby Bishop played extremely well against her WNBA counterparts, and had a very nice pump fake, dribble jump shot combo that she used a couple of times in hitting 5 of 8 shots for 11 points.

1. It had to be difficult adapting to the different lineups and subbing in and out.  15 players is too many, obviously,, for a cohesive roster, and it made for uneven play.

2. 27 rebounds and 20 Turnovers?  When have you ever seen a USA team with an almost 1:1 rebound:turnover ratio

3. Tamika Catchings was a surprise (to me at least) scratch, with knee problems.  It doesn't keep her from playing Fever games, but she's scaled back practice time

The Bad: The Opals

1. When Harrower or Bevilaqua were out, the team really struggled with cohesion.  They tended to stand around more and had a couple of shot clock issue possessions.

2. Stamina for Cambage.  She's big, but she ran out of gas very quickly and needed a lot of substitutions.

Overall, it was meant to be and was a learning experience for both sides.  Top competition, top talent, another day playing together as a team.

You have to remember that when it was scheduled, the Opals expected LJ to be healthy, so it was a rare opportunity to get LJ, Penny Taylor, Tully, and Bishop together with the others.  By handling the USA national team, they got a confidence booster.

But as Geno said post-game, hopefully they'll think this is as good as we are.

USA Basketball got to see player combinations they wouldn't be able to see together during the WNBA season.  It will be crucial,, considering the tight frame between the end of the WNBA season and the start of the World Championships that players can adapt quickly to the skills of their teammates.  As much criticism as fans have directed toward the inclusion of so many UConn players in the pool, this is a primary reason for it (not to mention the fact that Taurasi, Bird, etc are some of the best in the world).   That is something not lost on the USA selection committee.  Still, Harding, Dupree,  and McCoughtry all took advantage of their opportunity with solid play.  The final decision on roster spots, especially with Parker being injured, will be difficult.

Ultimately, the absence of their starting talent, including 3 of 5 starters (Fowles, Pondexter, Catchings) clearly gave the USA reason to believe this wasn't their best team.

So it was a good experience and spirited competition, which is exactly what a scrimmage should be!