One week ago, Indianapolis celebrated 99th year of the Indy 500.  The early season of the WNBA has been a lot like the Indy 500 in that most teams have been trying to tune-up their cars while racing them at 250 miles per hour.

The Indiana Fever "car" had initially stalled at the green light (thank you, Istanbul), but has since torn through the field, even as the Coach Lin Dunn continues to tinker on the Fever's engine.

After starting 0-2 in a pair of opening weekend games against the Washington Mystics and the  Atlanta Dream, the Fever have won 5 of 6. The Fever have just finished three games in four days going 3-0, with two of them blowouts. On Thursday, the Fever led San Antonio by as much as 30, winning 79-57. Yesterday, the Fever shattered the well-advertised myth of WNBA parity with a 38 point (89-51) win over Minnesota Lynx on their homecourt.

With approximately a quarter of the season's games played (8 of 34), the Indiana Fever's  preseason is officially over.

Even so, the Fever's winning streak has come largely against losing teams in the cellars of both  conferences: San Antonio (2-5), Minnesota (2-7), New York (2-4).  The sole loss came against the Tulsa Shock, who are 3-4. The two wins against Chicago took place before the team climbed up to 4-4 this week.

Looking ahead, the upcoming five games over the next two weeks represent a substantial test for the Indiana Fever, as they compete against the best teams in the WNBA.

These five games will be of tremendous importance to gauge the Fever's personnel and scheme against teams the Fever expect to face in the playoffs.  Further, the statistical potpourri of analysis against the weak field Indiana has defeated will not provide a good indication of how ready Indiana is for the WNBA's early season elite. 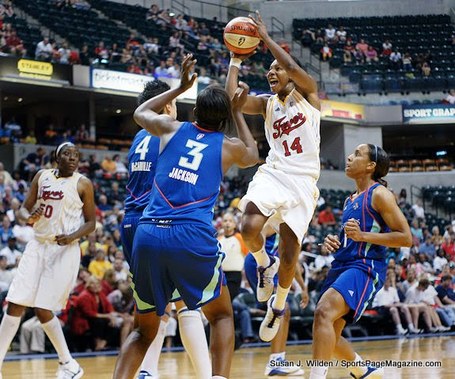 The Indiana Fever's success starts with their defense, and the Fever have held opponents to 68 points per contest.

The 79-74 loss to Tulsa disturbed the team because they failed to get key stops down the stretch. Massey Ratings reports this upset the "Least Likely Result" of the WNBA season thus far.

"What our success was and knowing how we obtained our success from last year was making our identity on the defensive end.  In Tulsa, we couldn't get stops.  Every time in a close game, we normally could get stops and find ways to win." said Douglas. "Any time you're a second late in this game...people are going to make plays."

"We just talked about the things that we wanted to do as a team and how we wanted to be known  throughout the league," Catchings said. "Last year, we were that defensive team that everybody knew. That’s the one thing that we have to get back to. Tonight was a huge night for us from that standpoint."

Following the loss in Tulsa, the Fever have held San Antonio to 57, New York to 73 and Minnesota to 51. Regarding the Minnesota game, Coach Dunn said "I thought tonight we probably  defended as well as we have defended since back to the playoffs." (Tamika Catchings' 27 points against the Lynx is not her season-high. Courtesy of David Sherman/NBAE/Getty Images)

The Fever's strangulating defense has been good all season, primarily because it had to be. The Fever's historically anemic offense was in critical condition to start the season.  More so than jet-lag, the team has been out-of-sync.

In first five games of the seasons, primary scoring option Katie Douglas was in an awful shooting slump. Douglas was shooting 33% from the field and taking less than 10 shots per game. That slump was compounded by a rusty offense that forced Douglas to put up bad shots late in the shot clock. In the past three games, Douglas has shot 64% from the field, 53% from three and is taking more shots as well.

Douglas is filling in at the PG spot, which seems to have been the impetus in her improved shooting.

"She had the ball in her hands a lot more coming down the floor, so she was able to create for herself and kind of say, 'Okay, I've got a shot, we don't even need to run anything.'" explained Coach Dunn. "And we want to run early offense.  And I think when she does have the ball in her hands like that, sometimes she gets early, quick shots that she doesn't get if we set up."

"It's an adjustment for me." said Douglas about managing the point.

Indeed, it looked as if the rest of the team had lost confidence on offense and were playing  "hot potato," passing the ball away from themselves as quickly as possible until, finally, Douglas would shoot it.

Occasionally, other players do step up.  Veterans Tammy Sutton-Brown, Ebony Hoffman and Tully Bevilaqua can be counted on to put in a few shots each game. Shay Murphy scored 36 points on 12-24 shooting in two  games against Chicago. Jessica Davenport put 11 points on the Silver Stars in 8 minutes on a surprising array of shots. Shavonte Zellous went to the line 12 times against the New York Liberty and scored 23 points.   Jene Morris is still finding her way as a rookie.

Indiana's front line is as solid and as well-defined as any in the league. Tammy Sutton-Brown anchors the center spot and Ebony Hoffman at the power forward with Jessica Davenport and Jessica Moore coming in relief. All are solid defenders that provide infrequent, largely situational offense. For example, Ebony Hoffman's scoring often improves against teams that give up open shots, like Phoenix.

On the perimeter, auditions continue. The starters are set with Briann January, Katie Douglas and Tamika Catchings, but with January injured, aspiring rotation players have more playing time to make their case.

With great back-to-back games against the Chicago Sky, Shay Murphy earned more playing time. With that time, she's shown solid defense and outstanding perimeter rebounding (in 22 mpg, she  leads the team with 6.4 rpg), but a poor outside threat. She's has been putting extra time in shooting and makes her shots in practice, but it has not yet translated into the games.   Were her shooting to improve, her rebounding and defense would make a strong case for starter's minutes over Ebony Hoffman.

Recently acquired Shavonte Zellous is also getting a lot of playing time. She stays on the floor for 20 mpg with her intense defense and the ability to play the point in limited stretches. She also provides a hopeful scoring option for the Fever, displaying a classic slasher game.  Zellous doesn't have much of an outside shot, where she's 12% from three, but she can drive and get to the line. She's 50% from the field at close range and an 86% free throw shooter. With a 23 point game against New York, she's rested fears about her play in Tulsa, where she didn't get to the line and shot just 16% from the field for 4 ppg.

Briann January's sprained medial collateral ligament is healing. At best she will be ready for the Connecticut series, but may be held out longer for precautionary reasons.