Phoenix Mercury Eek Out Another Win Over The LA Sparks

Share All sharing options for: Phoenix Mercury Eek Out Another Win Over The LA Sparks

Through two home games against the LA Sparks, the Phoenix Mercury have two wins and a point differential of +2. I am not sure these two teams are really that close, but you can't argue with the numbers....but we can rationalize them.

The Sparks kept the game close with far better than normal outside shooting while the Mercury, and mostly Tangela Smith, missed countless open three's that could have blown the game open.

Them's the breaks of the game.

You might not guess it, but one of the best shot-makers on the planet understands that better than anyone.

"That's what we have to do," Diana Taurasi explained. "You're not going to make every shot. Even today we necessarily didn't shoot the ball very well. We went through stretches where we couldn't hit the broad side of a barn but as long as you're getting possessions and you're finding ways to make luck go in your way and then you'll be OK. And today we fought, that's basically what it came down to is we scrapped a little bit harder."

Coach Gaines still isn't happy with the way his team is playing but Mercury fans have to be encouraged to see their team win a tight game in this fashion. Both Taylor and Taurasi missed late shots that would have sealed the win. Instead it was defense and hustle rebounds that got it done.

It was an ugly game and neither team can be thrilled with their execution down the stretch - the Sparks turned the ball over on an eight-second violation and the Mercury turned it over on an in-bounds pass with a one point lead and 13 seconds to play. In the final 2:45 of the game each team only scored two points. 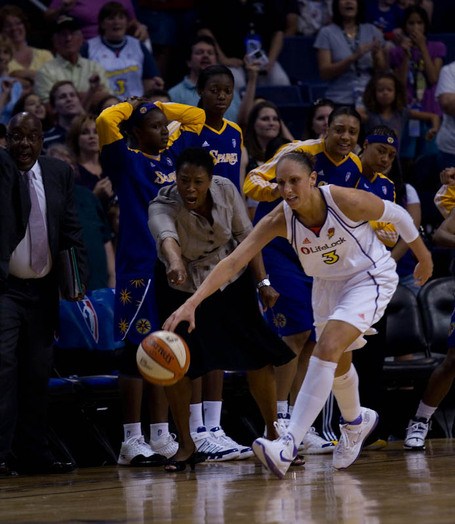 The difference was the fight and scrap that Taurasi talked about.

On one missed shot the rebound clearly was going to the Sparks until Temeka Johnson dove into the fray which resulted in the ball going out on the Sparks.

On a Taurasi attempt to take a lead, it was Bonner who grabbed the rebound and fed it to Tangela Smith for an open layup which was the difference in the game. Smith was fouled on the play but missed the free throw. Taylor flew in and battled for the ball, securing another possession for the Mercury in what should have been the game-winning play had the Mercury not thrown away the in-bounds pass with a one point lead.

That gave the Sparks the ball with 13.6 seconds. Coach Gaines went with a big line up that allowed him to switch everything. With Bonner playing Candace Parker tight, the Sparks -- who Gaines called "disoriented" on their last play -- ended up with a driving layup attempt from DeLisha Milton-Jones. It was a good look but Milton-Jones wasn't able to connect and wouldn't you know it, it was DeWanna Bonner who ended up securing the rebound at the buzzer and preventing a game winning tip-in.

Bonner had yet another incredible game with 24 points (9-13) and 7 rebounds in 28 minutes. She was also 2 for 3 from behind the arc with her only miss being a desperation heave at the end of the clock. Compare that to Candace Parker who had 26 points and 12 rebounds in 37 minutes and was 10 for 20 from the field. And you might not believe it, but in this game Bonner was the best player on the floor. Parker's numbers were fantastic but she never seemed to really dominate or impact the game the way Bonner did.

Gaines once again said that DeWanna would have won Rookie of the Year last year if he had played her more and she would be a clear all-star this season if she was starting and getting more minutes. He joked about how difficult it is to keep her off the floor - but her play is no joke. She kept her team in the game with her energy in the first half and made all the key plays in the clutch despite not recording a single point.

At this point in the season, Bonner is the MVP of the Phoenix Mercury - and that's saying something.

Signs Of Progress From Mercury Offense

The Mercury offense didn't look like it was in any kind of flow in the first half but in the second they seemed to find a nice stride. They finished with 13 of their total 19 fast-break points in the second half and only gave up the ball 6 times leading to 4 Sparks points. Defensively, they generated 13 points off turnovers in the second half which obviously helped the offense as well.

One big improvement to the half-court sets was a key adjustment Coach Gaines made with how he used Candice Dupree. Instead of feeding her the ball in the post he's been, even against bigger defenders like Lauren Jackson and Erika de Souza, he changed things up.

"It seems with the match-ups we've had so far, I've been a little undersized so I had a conversation that posting up all the time isn't something that I always want to do. I like to get the ball on the move, like you said pick and rolls and stuff like that," Dupree explained.

Candice was limited in her minutes in tonight's game due to a quad strain but despite that was very effective in her 21 minutes and had 8 points on 4 of 5 shooting and 8 rebounds. Two turnovers isn't great, but it's an improvement.

Early in the game the Mercury didn't look for Dupree at all and then in the 2nd quarter ran some pick and rolls for her that had her slipping the picks and getting clean looks going to the basket on the move. By the third quarter that forced the Sparks to adjust their coverage which left the Mercury shooters open and the offense started to look sharp for the first time this season.

If the Mercury half court offense takes off from here, we can look back at this adjustment - getting Dupree the ball on the move, in pick and rolls and facing up bigger defenders - as the key.

The transition game still isn't as good as last year but that's to be expected without Pondexter to take the relay pass from Temeka Johnson. Johnson says that she needs to do a better job advancing the ball up the wings to Taurasi, Taylor and Bonner and Gaines insists that teams are doing a better job cutting off those passing lanes but clearly this is one area where Cappie is missed.

But that's OK. If the Mercury can battle a team like the Sparks to a virtual draw on the glass and win a game with stops and key rebounds, it bodes well for a team that still leads the league in scoring - despite not yet having found itself in the half-court execution. We saw glimpses today in a game where the Mercury would have cruised to a comfortable victory if Tangela Smith goes 5 for 9 instead of 2 for 9 from three.

Things appear to be looking up but we will find out if that's true when the Mercury face the Storm in Seattle on Sunday followed by the Sparks in LA on Tuesday and the Lynx at home on Thursday. A tough schedule and a very important stretch of games.