Expect this game to be harder fought and more sophisticated than the prior two matchups, which saw the Fever sweep the Sky within the first week of the WNBA season.

The Chicago Sky are coming off a scintillating wins over the top teams Washington Mystics and the Connecticut Sun.  Their first 4-0 win streak came from the emergent offensive play of Big Syl, but the latest streak is coming from the emergent offensive play of the Sky's backcourt, Epiphanny Prince and Jia Perkins.  Epiphanny Prince is playing confidently and taking over games at critical moments.  Jia Perkins is hitting her shots and scoring.  Despite their 5-8 record, a functional offense will make this team hard to stop, especially at All-state Arena.

As Audrey Reynolds notes, the Sky are in their unstoppable phase: 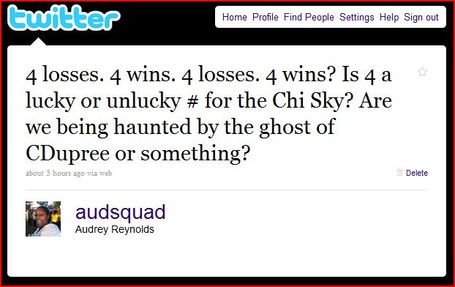 There's no reason the Sky can't win this game.

Meanwhile, the Fever lost a hard fought game to the Storm in Seattle.  Despite the loss and an abysmal 4th place in the Eastern Conference standings, the team is playing well.  The Fever front-line and team defense has had success against the big stars of the league, such as Tina Charles and Sylvia Fowles, not necessarily by locking them down, but by making every touch and every play difficult for them.  The problem that has hurt them several times is that the inside focus gives the outside shooters a chance to make plays.  On occasion, someone like Renee Montgomery or Sue Bird have gotten hot at crucial moments in the game, and made a difference in the game's outcome.  It's not clear if the Fever can respond quicker to a player getting hot or not.  Sometimes it can be hard to recognize in the flow of the game whether its a short lucky streak or a player "in the zone." In Renee Montgomery's place, the response wasn't made in game at all, it was made in the subsequent matchup.  In Sue Bird's case, she dropped 3 treys in 90 seconds.  Not sure that the defense could have responded quicker to that kind of outburst.