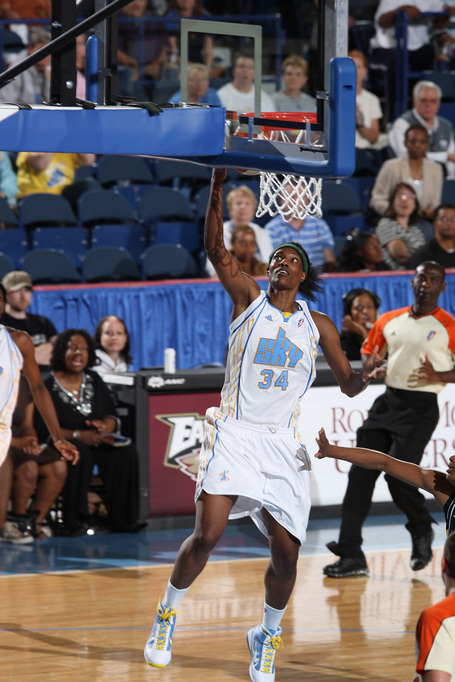 Six foot six inches tall. A wingspan well beyond that. A menacing glare as someone enters the lane. Do not even attempt to enter her kitchen. That's the public persona WNBA fans see when they view Sylvia Fowles, "Big Syl", patrolling the court for the Chicago Sky. But you can't believe everything your eyes see, can you?

Sylvia Fowles is one of the most delightful interviews I've ever had the privilege of conducting. Along with her manager Quency Phillips of Fuzion Athlete Management, I talked about everything from her tough upbringing in Miami, to the refereeing she encounters in both the United States and Europe. Here are some highlights for you to hear. As always, remember you can hear the entire interview, along with many others on http://www.wstrradio.com/dishn-n-swishn.htm.

"Little Syl" was raised by her mother in Miami as the youngest child, dealing with all that goes with both of those things.

Dishin & Swishin: Big Syl on Growing up in Miami

The first recruiting letter came freshman year in high school, from Florida State. It was a little disappointing because Syl was determined to get out of Florida and get a start elsewhere. Enter one of the most incredible women that has graced women's basketball and was taken from us too early.

A successful college career loaded with double-doubles and individual awards and honors was bitter sweet. A team first player, Sylvia was thrilled to have her LSU teams go to four straight Final Fours, but disappointed to come away without a national title. It was in her senior year that the fans finally got to see one of the things they had been waiting for since Big Syl arrived and WNBA fans have been clamoring for since.

The Chicago Sky drafted Sylvia 2nd overall and she has been with the then-expansion team her entire career. It's been an adjustment, especially for someone not used to losing games. The hardest thing may be getting used to different teammates and entry passes into the paint. Sylvia was spoiled in college, playing with one of the WNBA's best distributors, Temeka Johnson.

As Syl's offensive game has improved, it's still being a defensive stud for what she is best known. She's playing against the best post players in the world in the WNBA and in Europe. There are different styles, different types. Would she rather play a post-up center, or one that faces the basket?

Dishin & Swishin: Big Syl on Defending in the WNBA

Big Syl is a European force, not just a WNBA force. She has played overseas for a few years now with Spartak, the Russian powerhouse. A veritable all-star team with teammates like Diana Taurasi, Sue Bird and Janel McCarville this past season, Spartak ran into some, uh, shall we say, uh, "questionable" officiating in the finals.

Off the court, Sylvia Fowles' donation to Meek's Hope was just the beginning. She has her own "favorite cause" to champion and it hits home with her family, child epilepsy. I'm sure her foundation will be a success, because as Q said in the interviews, Big Syl goes big all the way.

Finally, I must say the secret is out. Sylvia Fowles, despite that on court appearance, is not a quiet, menacing individual. She describes herself as "goofy" and she and Q gave us a look at some of the other sides of Big Syl. Enjoy!