The Connecticut Sun's league-leading homecourt advantage is probably a statistical artifact derived from the simpler fact that the Sun have won all of their home games, but also have lost all of their road games.

The weekend home-and-home series between the Sun and the Indiana Fever further reinforced that wedge.  The Sun won Friday's game at the Mohegan Sun 86-77, but lost Sunday's game at Conseco Fieldhouse, 77-67.   In both games, the home team got an early lead, the away team tied the game in the 4th quarter and the home team got the stops and the scores to win the game.

Sun coach Mike Thibault talked about the home-and-home series. "The two teams are kind of eying each other.  As we go down the road, you could end up playing each other in the playoffs.  There's enough of a rivalry between them.  Knowing that it was like a mini-playoff series, I was disappointed at the start."

"We understand we have to become a tougher team on the road." said Sun guard Kara Lawson.  "We've got to play LA and then we've got to play Phoenix next week.  We've not won a road game a month into the season. We have to focus on that.  We've got to be tougher.  We got to be better defensively in the first halves. In all of our road games we fell behind.  We played better second halves, but have not been able to get over the hump."

Thibault echoed those sentiments, saying, "My biggest concern is, aside from the series part of it, is that I thought we would have had a better start to the game tonight than we did.  Obviously we jumped them a little bit early at our place and I knew they would be more aggressive defensively coming into tonight."

"I felt now that we're whatever number of games we are into the season, I thought we would handle it better.  And we didn't.  It's one thing to miss shots, but to not rebound the ball well enough and to have, I'll say, sloppy turnovers, not even them making a great play.  That disappointed me," continued Thibault. 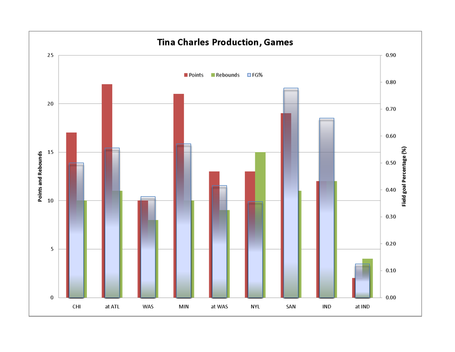 Rookie Tina Charles was shut down for the first time in WNBA play on Sunday, having her first major struggle since joining the WNBA.   She shot 1-8, didn't make it to the free-throw line, scored only 2 points and worse still, grabbed only 4 rebounds in 23 minutes of play.

"She wasn't very good tonight. You'll have to ask her. I wish I knew. One, she needs to handle the double teams a little better.  The other night she did a good job, tonight she struggled a bit more, but she didn't rebound the ball tonight.  Whereas the other day, even when she was struggling offensively, she was rebounding the ball. She ended up with 11, 12 rebounds. I wish I had the answer," said Thibault.

It was a concerted effort by the Indiana Fever effort to limit Charles' touches and to frustrate her play.

"Our defensive effort was much higher tonight.  We brought a lot of energy, intensity.  We set the tone that we were going to defend better than we did Friday night.  I thought we did a really good job with our team and individual defense on Charles.  You have to give Tammy Sutton-Brown a lot of credit.  She fought her all night long.  And the team, our whole team was focused on not letting Tina get good touches and I thought that was key for us," said Fever coach Lin Dunn.

Describing her play, Tammy Sutton-Brown said, "Just hard work.  We know that's a big part of the game, especially us being a defensive team and wanting to run, we have to get rebounds.  Connecticut has some of the better rebounders in the league.  That's been a big focus for us all week... Unless we make stops and take care of business and stop players, we're not going to win."

In addition to Sutton-Brown's defense, Tamika Catchings and Jessica Davenport also took turns on Tina Charles.  In one spectacular play, Catchings poked the ball out Charles' hands, Briann January dove to the floor, saving the ball from going out of  bounds.  In another series, Davenport's length bothered Charles' shot on one possession and her shot was then blocked by Davenport on the subsequent possession, coming down in Davenport's hands.

Because Tina Charles is a rookie, few teams have had the opportunity to play against her enough to build up a book on her strengths and weaknesses in the WNBA game.

Mike Thibault went on to say, "This is part of the learning experience she's going to go through.  These games are going to pile up a little bit now.  People are going to be gunning for her.  They are reading her press clippings.  She just needs to learn how to adjust."

Looking ahead, the Connecticut Sun will have a lot of opportunities to win their first road game.

"This is a good test for us. This stretch of the season will tell us who we are.  We've got this game and counting it we've got 7 of our next 9 on the road," concluded Thibault.

If the Sun can't get some road wins in this next stretch, they could quickly find themselves going from top of the Eastern Conference all the way to the bottom.