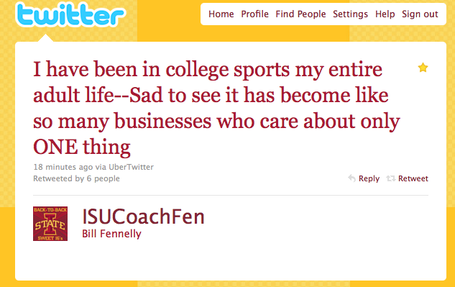 This was bound to start happening at some point and today it has: Big 12 coaches are starting to (rightly) point out the flaws in the anticipated fragmentation of the conference, including a major merger with the Pac-10.

While Iowa State coach Bill Fennelly points out the obviously paradoxical notion of the NCAA's stated interested in being an amateur sports organization while member institutions clearly place an emphasis on profit, Oklahoma University coach Sherri Coale points out the difficulty the student athletes might face in this scenario.

Coale critical of possible changes | Tulsa World
Critics of the merger point to the loss of regional rivalries and traditional matchups, such as OU-Nebraska in football or Oklahoma State-Kansas in basketball. Others decry the idea of long, expensive and physically taxing travel demands on student-athletes — and the families who want to see them play.

"Look at it this way," Coale said. "Football plays on Saturdays. But we play on weeknights. How about a 7 o'clock game in Oregon? That's 9 here. That gets us home at 3 or 4 in the morning, if we want to get the kids back so they can go to class the next day. Are you kidding me?"

Obviously, Coale and Fennelly are not naive enough to believe that college sports were never influenced by money and particularly football money. And certainly, whatever hypothetical super "western conference" comes out of this would probably make some sort of accommodations to address Coale's concerns.

Nevertheless, I once heard someone note that if we truly made all major university decisions based on profit, we'd ultimately cut history departments because they a) rarely have high enrollments and b) don't bring in the major research dollars of other departments. At some point, there have to be other considerations, especially when at the center of all of this students are involved. So regardless of whether this is understandable or even justifiable, it's still worth noting just how sad it all is from the level of breaking up long-standing college traditions all the way up to the ethics of what it means to be an "amateur student-athlete" in today's NCAA landscape.