Share All sharing options for: Dishin' & Swishin' Catches Up With Vickie Johnson 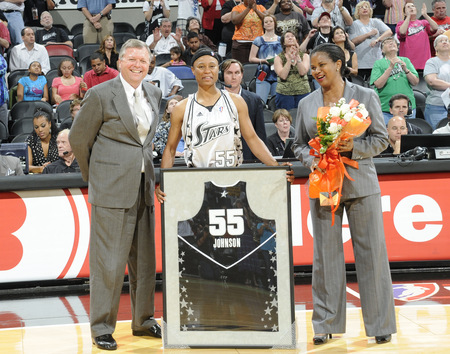 Unsung. It is a word often used, and often overused in discussing athletes in professional sports. The definition of "unsung" is "unappreciated: having value that is not acknowledged." In the case of Vickie Johnson, the word applies. Throughout her WNBA career, she never received accolades from the media, but she certainly had legions of fans, and the respect of her peers in the league. When I conduct an interview for www.wstrradio.com, I post a few highlights here, on Swish Appeal. This was too good an interview to only share a couple of points. I hope you enjoy the seven "snippets" I've posted here for you.

Dedicated, hard working, determined, maybe even stubborn. All can be used to describe facets of VJ's personality. You could see it early on in her career, when by the age of 9 she had already decided no one was going to stop her from attending Louisiana Tech, the national powerhouse in women's basketball.

The determination and hard work was cultivated by Hall of Fame coach Leon Barmore at Louisiana Tech, and VJ told me a great story about the girl from the small town in Louisiana participating in her first practice for a national powerhouse, and the person that always has your back.

The ABL and WNBA began when VJ was finished in college, so a pro career in the United States became a viable option for players. Offended that she was only taken 12th in the ABL draft, VJ signed with the WNBA's New York Liberty, who quickly built one of the early powerhouses of the WNBA. I talked with VJ about the first game, and the first year, in the legendary Madison Square Garden, and New York City.

Dishin & Swishin: VJ on NYC & the 1st Year of the WNBA

Despite the early success of the Liberty, they were never able to overcome the Houston Comets for that elusive championship, and after a while, some changes took place. Richie Adubato, who the players really respected and enjoyed playing for, was removed as head coach. With a roster full of veterans like VJ, Crystal Robinson, Teresa Weatherspoon, Elena Baranova and Ann Wauters, the team was at a crossroads. Keep together and make another run, or shake things up. How was the decision made?

So with New York in the rear view mirrow, the girl from Louisiana moved to Texas, joining a San Antonio Stars team that had struggled, but was putting together the pieces. One of the most important pieces was the Coach himself, Dan Hughes. Hughes seems to have created an atmosphere and feeling in San Antonio that is unique in professional sports, not just the WNBA. When I interviewed Chantelle Anderson, she couldn't stop raving about Hughes, the man and Hughes the coach. VJ was not much different.

One of the more interesting sideplots to VJ's story, is her role and assisting in the development of All Star guard Becky Hammon of the Silver Stars. I asked VJ about Hammon's success, as VJ has seen it from the start of Becky's WNBA career.

Dishin & Swishin: VJ on the Evolution of Becky Hammon

All good things must eventually come to an end, and so that is what happened after last season to Vickie Johnson's WNBA career. She hasn't been ready to totally end her playing days though, and she successfully returned for half a season in Turkey this past winter. VJ is at a crossroads herself right now. She turned down a Division I college that offered her a head coaching job. She has two offers out there right now; she can return to Turkey for one more season (at least) or she can take an assistant coaching position with a Euroleague team that has been offered to her.

Some people seem to be born to greatness, and others make things happen. Vickie Johnson makes things happen. Her brothers said she couldn't play basketball...she became one of the top guards in the nation by the time she graduated High School. She was determined to go to La Tech...she left as a two time All-American. She wanted to play in the best leagues in the world...she's been a WNBA All-Star and has played in some of the best leagues all over the world. Her next goal is to coach, and to give back via camps and AAU sponsorships. Does anyone doubt she'll succeed? I know I don't.

To hear the entire interview with Vickie Johnson, or any other interviews from the Dishin' & Swishin' show, including interviews with Cynthia Cooper, Cheryl Ford, Shyra Ely, Sohia Young, and more go to http://www.wstrradio.com/dishn-n-swishn.htm