On the one hand, it has to be exciting for the Iowa State University women's basketball program that two former players are competing for WNBA roster spots, even if they're both fighting to crack the 11 player roster of the Seattle Storm.

"I think it's great," said ISU assistant coach Jodi Steyer in an interview with Swish Appeal last week when asked about the significance of having two ISU players in one camp. "That's why it's fun to hear and I've retweeted a lot of what everybody's retweeted...Lindsey's always wanted that chance. She's done great overseas so I know she's always wanted that chance here."

On the other hand, with the roster limits and one point guard spot already filled with All Star Sue Bird, it's not exactly the ideal situation for a player like Seattle native and 2003 ISU graduate Lindsey Wilson. Wilson also finds herself competing for a reserve guard spot against fellow ISU alum and Storm 2010 first round draft pick Alison Lacey. Cyclones head coach Bill Fennelly considers Lacey the best point guard the Cyclones have ever produced and summed up his feelings about having both in the same camp succinctly.

"I wish they weren't trying out for the same team," said Fennelly in an interview with Swish Appeal just after the Steyer interview last week.

From the outside, it makes for what may seem like a bittersweet situation for Wilson, who previously participated in Storm camp in 2004. 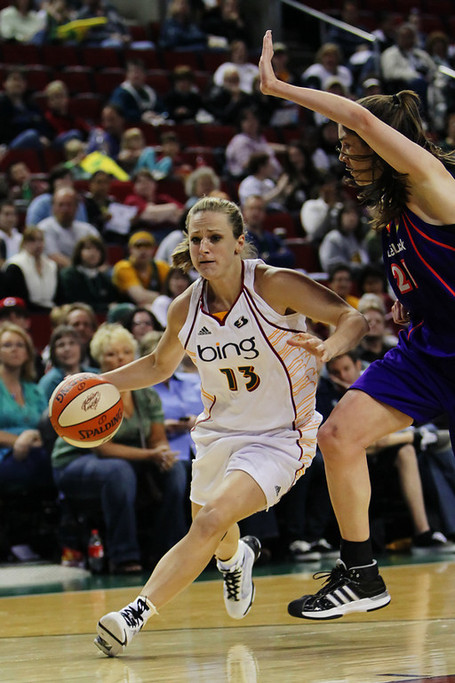 Although Steyer didn't find out about the Wilson signing until the day of the draft, Fennelly was actually aware that she would be playing in Seattle before Lacey was drafted.

"I talked to [coach Brian Agler]," said Fennelly. "He called me and talked about he was going to bring her into camp and we talked about what she could do. He had seen her play - he's really good with the European stuff - and he had seen her play over there, he followed her career here. And I think the idea that she lives in Seattle - some of that stuff goes into it too. So I knew that they had planned on it and he just had mentioned to me that he really liked her game and that they didn't know what their guard situation would be like."

Of course, prior to the draft the point guard situation for the Storm was quite uncertain. Shannon Johnson retired, point guard Loree Moore had been released from the Liberty only two days before, and obviously they hadn't yet drafted Lacey. But as a result of the team's concern about the point guard position, Fennelly was aware that the Storm were likely to draft Lacey.

"I knew that they had been interested in Alison and they had just signed Lindsey, so I think [Agler] felt that both of them [fit] a spot they needed," said Fennelly. "It seemed like from day one they really needed some depth at guard so I think that was the focus. So sometimes you get a surprise: someone gets into camp that can show you some things."

Although Moore is now injured leaving her chances of making the roster more uncertain than previously thought, Wilson still faces a difficult set of circumstances.

The 5'9" point guard believes her years of experience playing overseas has made her a much better player now than when she last tried out for her hometown team back when former head Storm coach Anne Donovan was still at the helm. However, the 29-year-old also has to be aware that time is running out on her WNBA dream.

"A lot of players love to play - she has an amazing passion to play in that league," said Fennelly. "This is probably -- she's extremely bright and has an amazing awareness of what's around her - I think she probably understands this is her last shot."

Nevertheless, when asked on Storm media day last week about the prospect of being cut as the regulars returning and rosters limited to 11 players, Wilson sounded unfazed, noting that it makes camp more competitive. Listening to her elaborate on her mindset, it almost sounded as though she reveled in the pressure of challenging circumstances.

"It also brings a focus and concentration that you can't really focus on that at all because you're just fighting every moment," said Wilson. "And that's fun too: playing sports and really being focused on the moment, you play your best and it kinda comes out of that pressure situation just throwing it up and working hard everyday and that makes it really fun."

Perhaps it's obvious that a professional athlete in a training camp that has more players that roster spots would understand that getting cut is just one of the risks of employment. Even still, the way Wilson seems to so readily embrace the circumstances might come as either a mild surprise or a little on-the-spot spin, depending on how cynical you are. However, that competitive fighting spirit is exactly what ISU fans might expect.

"Lindsey is one of those people that she's extremely competitive," said Fennelly. "You know, ‘I may not win the fight, but you're gonna have to kill me' -- she's kinda got that kind of street fighter mentality."

As her college coaches describe it, that "street fighter mentality" is also a major part of what defines her game.

Although Fennelly called fellow ISU alum and Seattle Storm rookie Alison Lacey the best point guard he's ever had, both he and assistant coach Jodi Steyer highlighted the thing that separates Wilson from their more recent graduation: strength.

"Lindsey, one thing she had, she's a different type of player than Alison, but boy is she strong," said Steyer. "Lindsey is about as strong from the point - like we always joke ‘a power point guard position' - and in that league I think that's really, really good."

However, at 5'9" Wilson is not going to necessarily going to overwhelm anybody with strength at the WNBA level either.

Fennelly, who admits that he might not know enough about the league to determine if Wilson can make a roster, figures that the combination of her strong play and her strong will make it tough for the Storm to cut her, even before the Storm announced that point guard Loree Moore needed surgery for a meniscus injury.

"I think she'll be hard to cut," said Fennelly. "They'll be in a meeting and probably say, ‘Well - but, but, but, but.' She just kind of keeps hanging around. And you never know if someone gets hurt or she plays well. They don't have a lot of exhibition games, so there's not a lot of opportunity to show what you can do - they only play two, maybe three. I know they're in Tulsa this weekend. So we'll see. But she'll make it hard on them - I know that much."

Although Lacey is likely to make the team and Agler has said he's willing to play with only three guards this season (presumably Bird, Lacey, and Wright), there's still a slim chance that the final roster decisions could work in Iowa State's favor. Fennelly remained cautiously optimistic.

"I think they're both good enough," said Fennelly when asked if both of his former point guards could make the Storm. "So much of that is about what a team needs and I don't know enough about the league - there's been a lot of players who I thought were good enough who couldn't make it. They're very different players. They're both talented enough, they're committed enough, they want to do it. It's just a matter of where they fit.

"It just depends on what Brian needs. So, I just think they'll work hard enough where they'll both be in the discussion so hopefully they'll both get that shot."