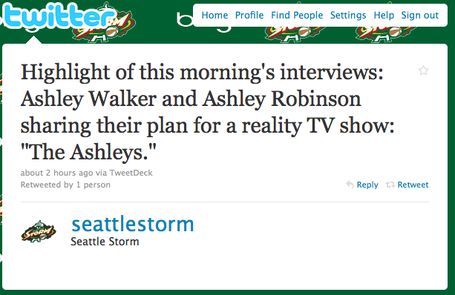 When one media member asked if they were comfortable doing the interview together, Robinson said something to the effect of she can hear anything I have to say to you all.

Apparently they're "the Ashleys and we act. like. the Ashleys."

Clich here to hear "The Ashleys, Pilot episode"
(Robinson was closer to the recorder and is thus the louder voice)

"We tried to talk them into letting us do something on the jumbotron," said Robinson. "But, eh, maybe another year."

"Ashley Robinson is a doll," said Hampton. "She's like more of a sister and Ashley Walker is more like a mom. So there's a whole family thing going on. Ashley Robinson has a lot of experience in the WNBA and -- as far as myself -- I go to Ashley Robinson or Camille if I need anything or if I'm not understanding anything she's a big help. Ashley [Walker] -- she has to deal with me either way...Ashley's like a mom to me: 'Dev did you do this?' and I think it comes from her mom being that way."

There was a Fox Sports camera present to record this entire episode and the video is probably a far richer experience. However, the hope is still that we'll see some jumbotron appearances for "The Ashleys" -- as she left Key Arena for the day, Robinson suggested that there would be a couple of jumbotron appearances this year.