What it takes to make the Mercury: "You don't sprint for yourself, you sprint for everybody."

Share All sharing options for: What it takes to make the Mercury: "You don't sprint for yourself, you sprint for everybody."

"Can I see that?" said Phoenix Mercury wing Lenae Williams, reaching for the final box score I was holding in my hand during our brief post-game interview outside the visitor's locker room at Key Arena.

After she studied the box score of the Mercury's 77-58 loss to the Seattle Storm for a few moments, she let muttered a disappointed, "Alright."

When asked what she would like to see more of, she said plainly, "A better percentage."

To some, Williams' reaction might seem strange given that she was arguably the Mercury's MVP with a team-high 19 points and seemed to give the Storm defense problems. Not bad for someone who only arrived in camp on Thursday and only attended two practices before playing yesterday.

"We didn't really do a good job on Lenae Williams," said Storm coach Brian Agler. "We wanted to turn her into a driver and we never really did that."

However, what Williams saw is that she shot 7-17 to get her and 5-12 from the three point line, not particularly poor numbers -- especially shooting 41.67% from three point land -- but perhaps not the type of numbers that one might want to separate themselves from other players in camp.

Looking at the Mercury's roster, a reserve shooting guard appears to be the most glaring need and obviously Williams' shooting would seem to fit the bill for a team that likes to run and shoot plenty of three point shots (38.6% shooting on 685 threes last season). So it's no secret what players have to do to fit into this team -- sprinting...hard...a lot.

"Just shoot the ball, sprint the floor," said rookie guard Tyra Grant, echoing the sentiment of Williams. "That's kind of their style of offense -- it's just sprinting down the floor as hard as you can. You don't sprint for yourself, you sprint for everybody. So by me sprinting harder and maybe passing the ball, it opens up the middle for the posts. So they just emphasize that: sprinting up the floor as hard as you can and making sure that you get everybody else open and also you can get yourself shots."

What's interesting about this competition for a roster spot after watching the Mercury play the Storm yesterday is that each of their wings offers something very different to the team (rather than being similar players of different quality). The decision might ultimately come down to not only performances in the practices that media have no access to, but also the most subjective of measures: personal preference. It's something that an experienced basketball player like Williams simply isn't worried about.

"Really, I just play," said Williams. "I'm a shooter. If that's what they need, hopefully it will happen. But I don't try to worry about it -- I just go out there and try to play and try to have fun."

A brief look at each wing candidate's performance:

As yesterday's game might suggest, Williams is a pure scorer -- a specialist who tends to contribute her shooting touch more than anything else.

"No, not really," said Williams when asked if there's anything other than shooting that we can expect from her. "I mean, I don't mind posting up -- overseas I post up. But I was just trying to play within the system and do what they want us to do. So that was pretty much it."

One thing potentially working against a specialist making the team is that coaches have typically said that they're looking for versatile players to fill out their rosters of 11 players.

By now you may have heard the buzz about Williams' 34 inch vertical leap that she apparently used in practice to block a Candice Dupree shot.

But what makes impressive is not just her athletic ability, but the fact that she showed that she knows how to use it effectively in game situation. From the box score, the 6'1" wing player's 8 rebounds might stand out as a sign of athleticism. And yet despite shooting only 2-9 for 9 points, it was actually her ability to create scoring opportunities that may have been most impressive. A couple of minutes after entering the game, Holmes showed off what she's capable of as a scorer on consecutive possessions.

With just under 3 minutes left, Holmes got the ball at about the right elbow. She took a rocking dribble right, came back to her left to create space between her and her defender, and elevated while fading to her left to hit a 15 footer. On the next possession it was the same sort of play -- a crossover to create separation and using her elevation to give her further space for her shot -- except she also drew a foul on Storm forward Ashley Walker, who simply was just a step behind.

Holmes' 2-7 shooting performance may imply that the athleticism demonstrated by her fadeaway jumpers is almost to her detriment because she takes so many tough shots. However, the ability for a young player to get those kind of shots is rare in the WNBA. Combined with her ability to get to the rim -- she had 8 free throw attempts -- and pass both in transition and half-court sets makes her a strong candidate for a roster spot, if the Mercury are truly looking for wing help. 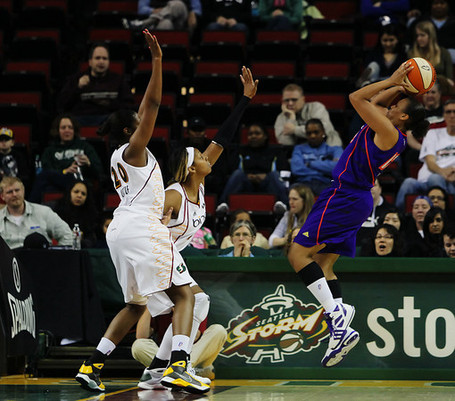 Unfortunately, the play that defined Grant's night also came at the expense of Walker.

With 5:34 left in the 3rd quarter, Grant got the ball on the right wing just beyond the three point arc and sized up Walker. Once she recognized the help moving to the weak side, she ducked her shoulder and headed right to the basket. Walker did an honorable job of staying in front of Grant, but just as Grant got to the edge of the key, she leaned forward to get Walker off balance and elevated backwards for the fadeaway jumper forcing Walker to lunge forward and foul. A few moments after the whistle blew, the ball rattled around the rim and in.

That's what Grant showed time and time again: she's relentless at getting herself to the basket even though she quickly found out that "girls at this level are HUGE". With a strong 5'11" 167 frame, Grant is quite a load to handle when running at a defender full steam.

Yes, she shot 4-12 for the game, but she ended the 3rd quarter at a respectable 4-9 for a rookie, especially given the nerves of playing one's first professional game in an environment like Key Arena.

"It was what it was for a rookie game," said Grant. "I'm just making sure I stay confident in what I'm doing and I'm sure everything will fall, the shots...It's a learning experience: just keep learning as you go and when you get into practice just relating everything back to the game and just making sure you progress day in and day out."

It's not often that you find a player with the build and aggression like Grant who has a nose for the rim. While the shooting percentages are still reason for concern, her ability to get to the basket and play through contact is a "skill" that is valuable not only to become an efficient scorer, but to put pressure on the defense.

Although the competition for guard spots would appear to be between the three players above, Stevenson - the final pick of the 2010 WNBA Draft -- certainly has the athleticism to contribute to Phoenix's system.

"Ny is in between a one and two," said Gaines. "She's trying to find her way."

The problem is that while she was often playing out of position as the team's lead ball handler for a number of possessions, she didn't really demonstrate what type of contribution she might make to a WNBA team, aside from possessing athleticism. Stevenson was more of a slasher in college, but she struggled to find scoring opportunities in that manner against pro competition - she airballed a contested three and found herself driving into a crowd and forcing up a shot attempt.

Conventional wisdom might suggest that the Mercury would look for players who can score. If Stevenson wants to distinguish herself from the other wings in camp, she'll have to find a way to do so consistently.