Share All sharing options for: Fever get Zellous, Waive Quigley 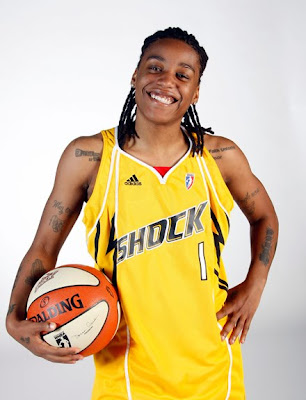 The Indiana Fever has acquired second-year guard Shavonte Zellous from the Tulsa Shock, in exchange for a 2011 second-round draft pick, it has been announced by Chief Operating Officer and General Manager Kelly Krauskopf. To accommodate the move on the Fever roster, Indiana has waived Allie Quigley.

Zellous was a first-team selection on the WNBA's adidas All-Rookie Team last season while playing for the Shock in Detroit. She ranked second among rookies with 11.9 points per game. She finished second in the WNBA behind the Fever's Tamika Catchings with 155 free throws made and she averaged 1.8 assists per game. She was instrumental in leading the Shock to the Eastern Conference Finals against the Fever, averaging 15.6 points, 2.8 assists and 1.2 steals per game in five playoff appearances.

A 5-10 guard from the University of Pittsburgh, Zellous averaged 4.0 points and 16.8 minutes per game in four appearances with Tulsa this season. She will don a Fever uniform Saturday when Indiana plays at Tulsa.

Following its first visit to the WNBA Finals and three consecutive sellout crowds during the 2009 WNBA Playoffs, the Indiana Fever is eager to pursue a sixth straight playoffs appearance and a return trip to the Finals in 2010. The Fever plays host to the San Antonio Silver Stars on Thursday, June 3 (7:00 p.m.), and entertains the New York Liberty on Saturday, June 5 (7:00 p.m.). Season tickets are available at FeverBasketball.com or by calling (317) 917-2500.

The Fever jumped at the chance to grab the high-scoring perimeter player that gave them fits in the Eastern Conference Finals.  For the final roster spot in preseason, the Fever had selected Allie Quigley over incumbent Christina Wirth and favorite Joy Cheek.  Both Wirth and Cheek were big and had range to shoot the three.  The Fever went with 5'10" 140lb Quigley as a high scoring option instead.

Zellous, despite putting up lackluster stats this year, is a clear upgrade over Quigley.  Zellous' numbers are way down in the first four games of the season, so I'm not quite sure if that's injuries, a lack of early season focus or what.  Hopefully we'll hear more about that soon.

Zellous is the player the Shock look to when teams double Nolan, or is the focal point of the offense when Nolan is getting a rest, which, granted, is rare.

"I think that I needed to help out a lot since Katie was a big part of the offense with Deanna," said Zellous after Wednesday’s win. "So I have to come out on the floor, off the bench, and give us some energy and help with some of the scoring." And, in an odd way, replacing Smith with Zellous may have made Detroit a more difficult team to defend.