How Monica Wright introduced herself to Seattle: "It just felt like it was a weight lifted off my shoulders"

Share All sharing options for: How Monica Wright introduced herself to Seattle: "It just felt like it was a weight lifted off my shoulders"

In reviewing game film of Minnesota Lynx rookie guard Monica Wright, Seattle Storm coach Brian Agler noted that she is a confident go-to player and liked "how physical she is for being that young."

Wright wasted no time in person showing Agler and the Storm just how good she could be when she came to Key Arena on Wednesday evening.

On an inbounds play during Minnesota's first possession, Wright came around a screen on the right wing and received the ball from forward Hamchetou Maiga-Ba and in seemingly one fluid motion elevated over Tanisha Wright for quick jumper falling away for the first two points of the game.

That was just a sneak preview of what was to come.

In the first five minutes before a Storm timeout with 4:44 left in the first quarter, Wright had already scored 6 points on 3-5 shooting capped off by a strong layup off of two feet after driving by Wright on the left wing and pulling a crossover on a rotating Lauren Jackson in the middle of the key.

It wasn't just that the Lynx were running plays to Wright, it's that she so smoothly showed the ability to score in multiple ways and an undeterred tenacity even in the face of a stalwart defender like Lauren Jackson.

In catching up with her after the game, Wright was definitely disappointed with the Lynx's 79-76 loss, but relieved by the breakthrough performance in which she finished with 19 points on 8-16 shooting in 34 minutes.

"It just felt like it was a weight lifted off my shoulders," said Wright. "It was just something I needed to do for the team to be in the game and be able to win."

The weight Wright was referring to was the 8-31 shooting in her first two games against the Tulsa Shock and Washington Mystics, which some might see as a harbinger of inefficient volume shooting to come. However, Lynx head coach Cheryl Reeve shared a more nuanced analysis of her performance with Swish Appeal prior to Wednesday night's road game against the Seattle Storm.

"You know, without Monica Wright to start the Tulsa game, we don't get off to a double figure lead," said Reeve when asked about Wright's 6-18 and 7 turnover performance against the Shock. "So we didn't really have a whole lot to say to her. We actually took her out at the end. And we've got some veterans that we need to count on. It should not be a situation where you count Monica Wright to get through this time. So I'm more interested in letting Moni just kind of adjust to our league and when she plays well obviously we'll be really good, it's just going to take some time."

Between Agler's observations of the Lynx offense, Reeve's faith in her rookie, and Wright's self-assessment of her game, it might almost seem inevitable that Wright ends up becoming a great scorer in this league. Perhaps needless to say, Wright was a bit better than the Storm expected. 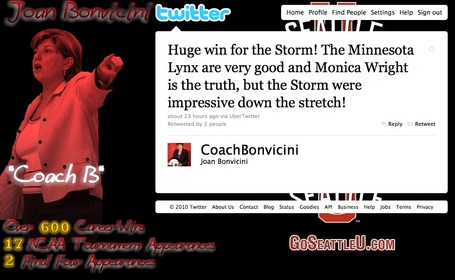 Despite the implied sense from both Agler, Reeve and Wright that things would eventually come together for her as a scorer, she was even more impressive than Agler expected.

"Oh man," said Agler after the win. "I mean, I knew she was a good player. What I didn't quite understand is how explosive she is -- getting from spot A to spot B, whether spot B is the rim or separating herself for a jump shot. I didn't get it! And I don't think Tanisha got it either until as the game went on because she was separating herself from us."

Regardless of whether Tanisha Wright "got it", the fact remains that Monica Wright certainly made an impression.

"Obviously she's a good player," said Tanisha Wright when asked for her thoughts on Wright. "I was a little off my game today as far as defensively and didn't really make her work as hard as I should've. But she's a good player and she made some good shots. So I think she's going to be a good player in this league for sure."

Bird's assessment of Monica Wright was similar to Agler's noting what an accomplishment it was for the rookie to do so well against a veteran defender like Tanisha Wright.

"What you saw tonight is someone - everybody knew that she had the ability to get it going and she got it going," said Bird. "She was hitting shot after shot and tough shots. T's one of the best perimeter defenders in our league. I think she did everything she could and Monica was just hitting shots. She did a great job."

It's not terribly uncommon for a rookie to enter the WNBA and establishing that they have the ability to score in bunches, but what separates Wright from the top scoring guards of the 2009 rookie class (e.g. then-Lynx guard Renee Montgomery, Tulsa Shock guard Shavonte Zellous, or then-Chicago Sky guard Kristi Toliver, who had a big game in her first Key Arena appearance last year as well) is probably what Agler mentioned after watching her on film: Monica Wright is a very physical player.

Her physical play allows her to do things that some of last year's rookie guards struggled with: not only can she shoot the ball but also get to the rim, and find her way to the free throw line. Although there may have been discussion among fans about whether she could play the point guard position, after averaging nearly 16 shot per game in her first three games while looking for assists considerably less often it should be clear that she is an off guard first. But that should not diminish the fact that she's a very talented basketball player.

After Wednesday night's game, former University of Arizona and current Seattle University coach Joan Bonvicini -- who has been attending Storm games and practices this season -- tweeted that "Monica Wright is the truth". However, as good as Wright was, Bonvicini's statement might have been a tad hyperbolic.

After fluidly navigating her way around Tanisha Wright and avoiding the 6'5" Lauren Jackson in the first quarter, Wright later seemed to unravel a bit on three consecutive possessions within 30 seconds of one another with just under 7 minutes left in the 2nd quarter. First she made a bad pass that was intercepted by Storm forward Camille Little and then made a turnover of aggression on the next possession, simply losing control of the ball to Bird with a full head of steam on a fast break. On the ensuring possession, she fouled Tanisha Wright on a drive to the basket, giving up a three point play. Let there be no mistake -- she's still a rookie.

"Well, Monica is a rookie who has experienced some rookie moments, but she's a player who we know is going to be a great one for years to come," said Reeve prior to the Wednesday night's loss.

Yet that didn't stop Agler from matching Bonvicini's praise with high praise of his own.

"I know who's out for them," said Agler, referring to Augustus and Wiggins. "I don't see her losing that spot -- and that's not a disrespect to anybody. That's just a respect towards her. It would be tough to have her on her bench and see her sitting there knowing what she can do."