Looking at the Kristi Toliver Trade

Share All sharing options for: Looking at the Kristi Toliver Trade 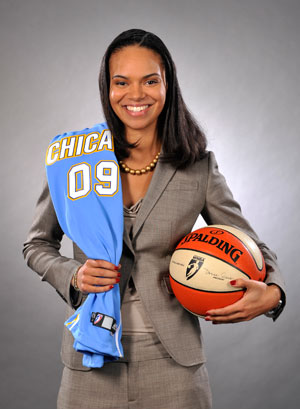 The 2009 WNBA Rookie Class has now seen the #3 and #4 overall picks traded.   Renee Montgomery, the #4 pick, was in a trade that was considered "reasonable" at the time; packaged with eventual #1 choice Tina Charles for All-Star guard Lindsay Whalen.   Most considered it a fair value trade.

The #3 choice, Kristi Toliver, was traded by the Chicago Sky yesterday to the Los Angeles Sparks for a 2011 second-round draft choice.  The same fans that considered the Montgomery trade reasonable, are stunned that Toliver was "given away" for a draft choice that frequently doesn't make the team.  But was she really?

To assess the trade properly, you have to begin on September 4, 2009, when after a Sky victory over the Washington Mystics, Toliver was interviewed by Joseph Phillips of SC Media in Chicago (http://www.examiner.com/x-29132-Chicago-Sky-Examiner~y2009m11d11-Kristi-Toliver-talks-candidly-about-her-playing-time) and the interview included the following:

Joseph Phillips: Kristi, you had 25 points in a game [on August 28th versus the New York Liberty] and then we don't see you. What happened?
Kristi Toliver: Your guess is as good as mine.

Other comments included "It's not like at college where I chose to go to [the University of] Maryland, they chose me to come here" and when asked if "fences could be mended" between her and Coach Key, "I don't know. We'll see what happens in the next three games and what happens in the in off-season. I want to play."

This was in a public forum.  This was not a complaint brought to the coaching staff or management of the team.   It was a rookie complaining about her role to the press.  It needs to be pointed out again here, that this is a player completing her first year in the league, not a seasoned veteran.  This is someone who was behind two veteran guards...one an All Star (Jia Perkins) and one that was brought in to be a solid vet on a young team (Dominique Canty).  She was also sharing bench time with the 2007 Rookie of the Year (Armintie Price) and two more experienced guards, Erin Thorn and KB Sharp.  So Toliver, in other words, was not being benched for an undrafted free agent who had not proved themselves either.

Now, let's look at the games that Toliver did not play much, or at all in.  Opponents included Seattle, Detroit, Los Angeles, Connecticut and Sacramento.  Each of these teams press the opponents' guards or have strong, physical point guards of their own.  Toliver has neither been known for her defense, nor her ball handling.  She is a shooting point guard.  But if you can't stop the other team's point guard, or you can't get the ball up vs. the press, you aren't going to get your shot off either.  The teams with less defensively aggressive or smaller guards, like San Antonio and Phoenix were teams Toliver played more minutes against.

Skip to the off-season.  The Sky have the #4 draft choice, and Epiphanny Prince is available.  She has been playing PG overseas, she is a scoring weapon, and has played defense under C. Vivian Stringer's system.  A logical choice to add to the team, especially with the trades made in the offseason that brought more shooters to the team.  So now you have Canty, Perkins and Prince, and Toliver -- who was already complaining about playing time as a rookie -- which you know did not win her many friends in Sky management.

Sometimes, there is addition by subtraction.  Kristi Toliver may go to LA, who has a pass first PG in Ticha Penichiero and become a scoring second option.  She may thrive playing among Ticha and Betty Lennox.  That doesn't mean the trade was a bad one.  Chicago may thrive with the guard rotation they now have in place, plus the revamped front line of Fowles/Christon/Kraayeveld.  The bottom line is that this trade might be a win-win for the Sky and the second year player looking for an opportunity.