Share All sharing options for: Changing of the guard for former Sooners as Courtney Paris cut, Abi Olajuwon stays

The hopes were high for Courtney Paris when she was acquired by the Chicago Sky in the supplemental draft.

"The thing about Courtney is everybody knows who she is and our hopes are that she can continue what she’s established in her collegiate career on the next level. Last year she didn’t get a lot of opportunity out in Sacramento – they had a coaching change and she played a little bit – and had a couple of games where she was 17 and 10," Sky head coach Steven Key told Swish Appeal before camp. "So I’m hoping she’s committed to being in shape and committed to being a professional. I think that if she comes in ready to go and ready to experience a new beginning in a new opportunity to continue that collegiate career."


And upon her arrival in Chicago along with her overseas teammate Epiphanny Prince after their time playing in Turkey together, Chicago was excited to see them both. 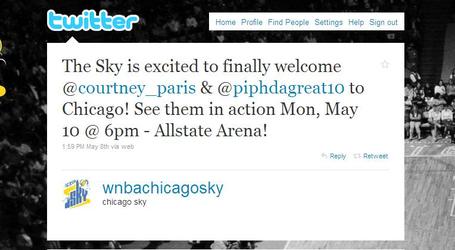 Now, just five days later, Paris will be leaving the Sky as she did not survive the roster cuts last night. While this is a surprise to some, especially given her remarkable collegiate career, others with closer ties to the WNBA are not expressing the same amount of shock by this recent development.

Head coach of the American University team, Matt Corkery tweeted this morning, upon hearing the news:

Corkery's sentiments are being echoed throughout the state of Oklahoma, where the Paris sisters became a solid segment of the Sooner landscape in the recent past. But for others, including analyst and former player Rebecca Lobo, the release of Paris comes as no surprise.

Ironically, her backup during her days at the University of Oklahoma, Abi Olajuwon, did enough to impress the Sky coaches as she remains on the team. During training camp, I spoke with Olajuwon about her time at Oklahoma and the expectations that may - or may not be - set upon her after her collegiate career. Olajuwon was friends and played with the Paris sisters when she was 15, decided to follow them to OU and knew full well that her initial role would be backing up Courtney.

"I really didn't focus on what people would think of me or the expectations that were set by certain people or lack thereof, as you say . . . Basically, I have been playing a long time for people to say that they were surprised at my success, you know, my senior year is a little bit of a shock. I mean, I was an All-American in high school and if people underestimated me that's fine," Olajuwon said during Sky training camp. "I feel people saw me and people really realized that wow, she can play basketball too. Those were things that my team knew my whole career there."

Even though her focus was not on expectations, her nervousness was evident on twitter in the hours leading up the the roster decisions: 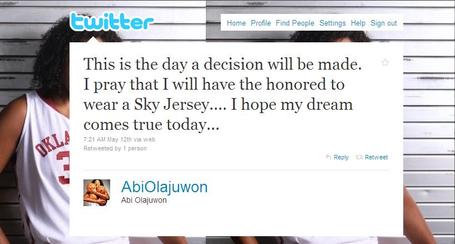 Olajuwon's dreams to play in the WNBA are indeed coming true, and some might think they come at the expense of her former college teammate, the woman she started playing with - and backing up - years ago.

But either way, welcome this new rookie to the fold as Olajuwon prepares to embark on her professional playing career with just four words uttered at the news: