2010 WNBA Players to Watch: Who is the WNBA's Most "Underrated" Player?

Share All sharing options for: 2010 WNBA Players to Watch: Who is the WNBA's Most "Underrated" Player?

Even though she was an All-Star in 2009, I will maintain that Minnesota Lynx center Nicky Anosike could be the most underrated player in the WNBA because I'm not sure people fully appreciate just how valuable she is as a defensive player.

And I expect even more from Anosike in 2010 as she prepares to play for the defensive minded Cheryl Reeve.

However, she was also an All-Star and member of the All-Defensive team in 2009, obviously making her a tough sell as a player who gets less recognition than she deserves.

So who might be a few of the league's underrated players -- players that get less recognition than they deserve, as described by the league's decision makers?

In conversations with coaches and general managers -- and personal opinion in the case of Tanisha Wright (pictured above) -- here is the list I've come up with.

There was a strong argument for her to be an all-star last season and she almost definitely should have won the league's Most Improved Player award, if you define it by the player who actually improved the most. On the floor, she's among the most powerful guards in the league and her ability to create easy baskets for the Storm when the team needs it most is what puts her on the edge of All-Star recognition.

Perhaps she's overshadowed by her three All-Star teammates (Sue Bird, Lauren Jackson, and 2009 All-Star MVP Swin Cash) or perhaps being in the Western Conference simply means that people don't see her enough. Regardless of the reason, one would have to think that people will pay a bit more attention to her in 2010.

For more on my thoughts about Wright, please click here. 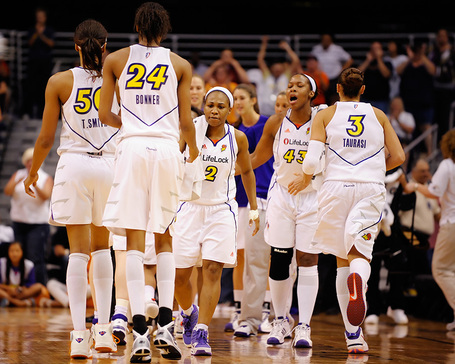 When asked for an underrated player on the Phoenix Mercury, general manager Ann Meyers-Drysdale suggested Johnson "because of her size. Heart of a Champion, a leader, and talented."

The Mercury demonstrated how valuable Johnson was to the team with their off-season moved. We've described the thinking behind the Mercury's off-season decisions previously, but to summarize: they knew they were not able to keep their core in tact under the salary cap and after Le'coe Willingham left for the Seattle Storm, it essentially came down to trading All-Star guard Cappie Pondexter in return for not only All-Star forward Candice Dupree in a trade, but also the ability to re-sign both versatile forward Penny Taylor and point guard Temeka Johnson.

As much as it will hurt the Mercury to lose Pondexter, keeping the point guard that led their offense might prove to be more significant than some people assume.

For more on "Meek", please see her interview on the latest Dishin N' Swishin show. 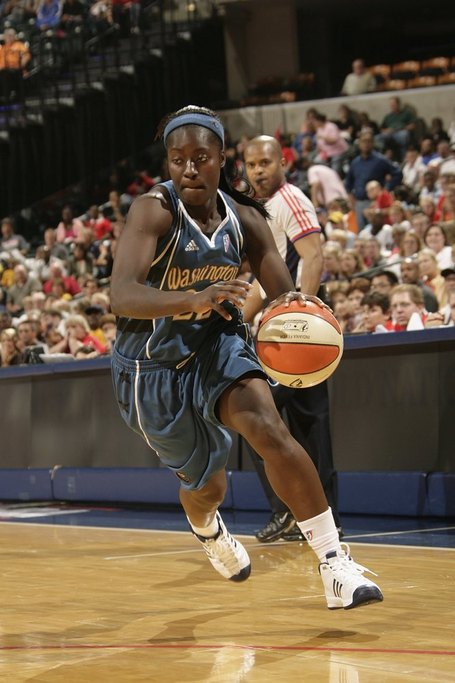 Photo courtesy of the WNBA.

Mystics general manager Angela Taylor is aware of the criticisms of Ajavon.

"Matee is somebody that [is] a love her-hate her kind of player," said Taylor in a February interview with Swish Appeal. "Like coming into it a lot of people were like, ‘Ajavon's been inconsistent.' But we were pleasantly surprised."

Perhaps it wasn't so much a surprise as the Mystics needing a player that create their own offense off the dribble. With players getting comfortable with a new offense and each other, point guard Lindsey Harding responsible for initiating the offense, and inconsistent post scoring the Mystics needed players on the perimeter that could create their own scoring opportunities. Ajavon was one of those players. Taylor cited both her quick first step and her vastly improved three point percentage - she went from shooting 19.1% during her rookie year with Houston to 34.1% with Washington in slightly less minutes per game - as two of her major contributions to the team, especially when guard Alana Beard suffered a late season injury.

"Matee is a player who first and foremost is a competitor," said Taylor. "So from day one she made Alana Beard better and Alana helped to make Matee better. So that's important for us - we relied on Matee quite a bit when Alana was out with an ankle injury and she was able to - kinda like Vinny the Microwave -- she came in and lit it up a couple of games and really is a catalyst off of our bench. She brings so much to the court offensively and defensively -- does a great job defending on the ball and just creating turnovers."

Taylor said she was having a good off-season and it will be interesting to see if she continues to improve this season.

When asked about the Shock's best defender, Robinson thought for a moment by clarifying the constraints of the question.

"Can I not say myself?" she asked playfully before getting permission to acknowledge her own ability. "Me! Me!"

You can't fault Robinson for being honest - the consensus among coaches and teammates was that the 4th year player is the team's best defender right now.

"She can lock somebody down on defense," said assistant coach Tammy Bagby. "I mean really, you can't get around the long arms, very active, she'll dive on the floor. I mean, it's just practice and she's just getting after it as if it was game time and the clock was on and the referees were out."

After their first game situation against the Storm last Sunday - a closed scrimmage against in the BOK Center - Shock coach Nolan Richardson also noted Robinson's defense.

"Scholanda plays such good defense, she can cover folks and I had her on the floor a lot," said Richardson of Robinson's team-high 23 minutes and 11 points on 4-8 shooting.

So perhaps she deserves a little bit more promotion.

"We picked her up in the dispersal draft and people don't talk about her very much, but she's a very gifted athlete," said Shock assistant coach Wayne Stehlik when asked about the team's most underrated player.

Stehlik also suggested that Robinson could end up being a breakout player this year in Richardson's "40 minutes of hell" system, so it will be interesting to see if the gifted defender can garner more attention this season. 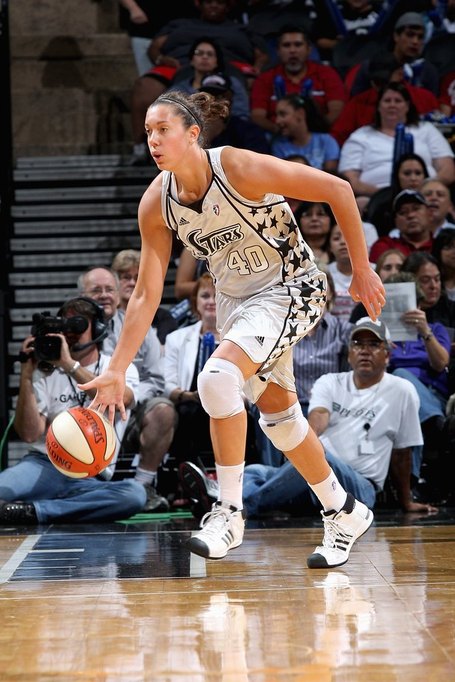 Photo courtesy of the WNBA

Frazee might not jump off the stat sheet at anyone, but she did show good instincts as a rookie and although her numbers seemed inconsistent last season, then-coach Dan Hughes takes partial credit for that.

San Antonio Free Agency Breakdown: An Opportunity to Fill Rebounding Needs
"I made the decision down the stretch to limit her and play a few more of the veterans," said Hughes about Frazee, who he expects to improve in 2010. "She had some pretty good moments there her rookie year. It will be interesting - she had a very successful year in Turkey, from the standpoint of playing professionally. I think this has really been a year of her playing basketball where there's been a lot of growth from the standpoint of her game. So I'm anxious to see that."

Frazee showed the ability to both score and rebound, leading the team with an offensive rebounding percentage of 18.18% and a total rebounding percentage of 16.31%. The problem is that the two players - the team's most interior-oriented players -- combined for just under 15% of the team's total minutes. So for a large majority of the time, there was nobody on the court who tended toward interior activity.

With the Silver Stars' post rotation quite full this year, it's difficult to determine whether Frazee will be able to showcase her improvement this season, she shouldn't be forgotten even among a talented group of second-year players.