According to the Clarion-Ledger.com and the University of Mississippi sports website, Ole Miss graduate Shawn Goff has received an invitation to the 2010 Atlanta Dream training camp.

Goff graduated from Ole Miss in 2009, and headed overseas to play in Sweden. I am unable to find out how well she did, but I believe she played for Swedish team Margo or Kinna Mark.

A four-year letterwinner at Ole Miss, Goff finished her career as one of the all-time greats to ever wear an Ole Miss uniform. The Tallahassee, Fla., native ranks 18th all-time at Ole Miss in scoring after pouring in 1,179 career points. She finished her senior season eighth in the SEC with 13.8 points per game and tallied 23 games in which she scored in double figures.

Goff also ended her career with 702 rebounds and is one of only 10 players in school history with over 1,000 points and 700 boards. She paced the Rebels and ranked ninth in the SEC with 6.6 rebounds per game as a senior. 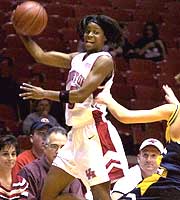 Another player, Chandi Jones out of the University of Houston, was invited to the Dream's training camp, according to the Houston Roundball Review:

Chandi Jones, the greatest player in the history of the University of Houston's women's basketball program, has signed a training camp contract with the WNBA's Atlanta Dream.Jones, 5-10, is not yet listed on the Dream's roster but has turned in her paperwork to the Dream.

Jones finished her collegiate career as the all-time leading scorer in UH and C-USA history with 2,692 points; and her number 13 jersey was retired by UH on February 5, 2005.

Jones was drafted 8th overall in the 2004 WNBA Draft by the Phoenix Mercury.

Jones played with the Detroit Shock in 2004 and part of 2005 before she ended up with Minnesota, finishing her career there in 2006. She was a teammate of Sancho Lyttle when they both played for the University of Houston.

Tatum Brown also makes an appearance in the Dream's training camp. Although there is no news article associated with Brown's arrival, her name is listed on the Atlanta Dream roster at the Dream website. Brown, a 6-4, 178 pound forward, graduated from Arizona in 2000. She has never played for the WNBA, but has remained active in international basketball

Brown has played in Israel (where she was once detained by the tough Israeli airport security), the Rwandan women's national team, France and Turkey. I know that she's been at least in camp for the Cleveland Rockers in 2002 and played at one time for the Houston Stealth in the old National Women's Basketball League, as well as the traveling Houston Jaguars team.

Good luck to all of the above. With a tough Atlanta Dream team, it's going to be hard to earn a spot on the roster.