I confess: I might be a little bit more excited than most people about Cal's WNIT championship because I'm both a Berkeley native and have family that work in the system of furloughs. I remember the NIT Cal won with Geno Carlisle and Cal is now the 8th school to have won both tournaments, for whatever that's worth.

But even if Cal's championship just makes you yawn, TwistNHook's two-part photo essay of his experience at Haas Pavilion (posted at SBN's CaliforniaGoldenBlogs in two parts) is absolutely phenomenal (assuming that you can forgive his ethnocentric taunts of a Miami player in Part II).

The part that I enjoyed most is this:

Cal v. Miami WNIT Championship Game Photo Essay 4.3.10 I - California Golden Blogs
In one moment, you see Eliza Pierre, representative of Cal's youthful, but talented core, throwing the ball in air to celebrate the victory. You also see an unnamed Miami player fall to her haunches, frustrated and crushed at being so close to the top of one mountain, even if it's not the mountain. You also see the beauty of class in the background as two rival players congratulate each other on a great and hard fought competition. This isn't about the million dollar contracts, this isn't about the endorsement deals, this is just about the highs of the high, avoiding the lows of the low, and appreciating the hard work and dedication of all athletes.

I show these not to toot my own horn as I am sure there are many who got much better photos of the same moments. All I want to do is try to help people better appreciate the fun of the Cal women's basketball team. We had a good, but inconsistent team this year. That is what happens when you have so many freshmen logging so many minutes. Coach Boyle, she of the Quads Of Steel, had them peaking just at the right time, playing great basketball when it truly mattered most. No, Cal didn't get to the NCAAs and yes, it hurts that Stanford is playing for the NCAA Championship when Cal is in "just" the WNIT. However, as Coach Boyle herself stated, getting this extra playing time, getting this extra experience can only help this young team going forward. Plus, ending the season on a high note and playing our seniors off on that high note was one of the best ways to end this season. This team is going to be good in the next few seasons and I hope you, dear reader, make it out to a game or two next year.

I hear the arguments for why people might see the WNIT (or WBI) as pointless tournaments because people don't watch. But I find it difficult to actually observe what TwistNHook has captured at Haas Pavilion and really believe that these tournaments are a waste of time. What I find surprising from some women's basketball fans - a sport that is still growing - is that for some reason they don't find these games valuable to the development of the game as a whole. I'm not trying to persuade men's basketball fans to care in this instance -- this is more about women's basketball fans.

For a young team like Cal (and for that matter, Miami), the experience itself will help them next season. That's just an unavoidable reality - more games = more experience = team improvement. However, to say that all game experience is equal is ludicrous -- anybody that has ever laced up shoes and played competitive basketball knows that. A WNIT championship game is not the same as a random pre-season game - it's two teams that have played together for a whole season together, come together as a unit, have a much stronger understanding of their strengths and weaknesses and then have the opportunity to bring it all together for a tournament run.

So the value of playing post-season tournaments for young teams is fundamentally to really build on those intangible team dynamics and actually experience what it's like to bring it all together. The more teams that have that opportunity, the more chance the athletes have to develop, which in turn helps the game as a whole. That is experience that cannot be quantified or even put into words well -- you have to experience being on a team to get that.

Although the WNIT championship didn't get quite the fanfare of tonight's NCAA championship game - it is, after all, a competition for #65 - at the very least check out CGB and try to see the impact of it all before dismissing it as worthless. 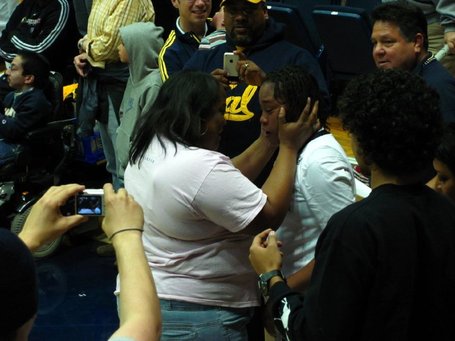