Today was the official start of the Phoenix Mercury's training camp.

As soon as I walked in, I thought to myself, "Geez, I think I recognize maybe two faces out there."

There were 9 women and 1 son of the GM, Ann Meyers Drysdale.  As you may have well heard already, the Mercury had open auditions for their practice squad, encouraging men from across the Valley of the Sun to see if they could compete with the women of the WNBA.  DJ Drysdale was one of the men selected to the practice squad.

So, while I sat there for a minute, playing the "So, judging by this picture, I think that's _________" with some of the rookies and invitees, I knew one face immediately: Candice Dupree. I must admit, as soon as the news that the beloved Cappie Pondexter was headed out of Phoenix dropped, I started doing my research on Candice.  What I found was encouraging, and I thought to myself, "You know what, it could just work."

Disclaimer: There is no replacing Cappie Pondexter. She's a truly unique player, and will be missed. The Candice Dupree trade looks to be a very good trade for the Mercury, considering getting rid of Cappie was strictly a salary related move.

After the jump, more thoughts, observations, and quotes! 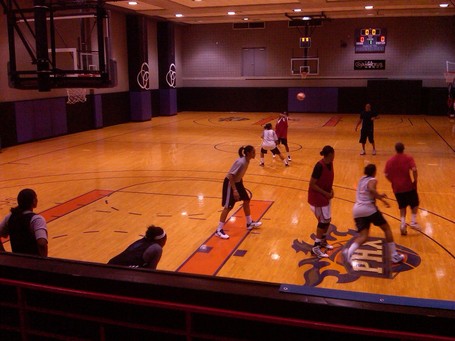 Candice Dupree and others run through sets under direction of head coach Corey Gaines.

Of the 16 players on the Mercury Training Camp roster, 3 are rookies.  2 of those rookies were drafted by the Mercury in this year's draft, Tyra Grant and Nyeshia Stevenson.  The other rookie invited was undrafted University of Oregon standout Taylor Lilley.  The Mercury are reportedly pretty high on Tyra, but to say that she's a lock to make the team is far from accurate.  Regarding the rookies, head coach Corey Gaines said:

You see the typical college stuff: not wanting to shoot the ball, spacing bad, and everyone is faster, taller and longer at this level, so they're not used to it yet.

You've always got a chance. We haven't played any games yet, and you have to give them some time to get used to it. So there's always a chance.

From my observations, Taylor Lilley, while yes, she had a good jumper, did not look like she was on par with the rest of the invitees. Her offense and playmaking looked methodical and predictable, and while she did make some good plays here and there, other, more experienced players appeared to have the edge. Point guard hopefuls like Ketia Swanier and Yuko "Shin" Oga looked more comfortable. Then again, those players are very familiar with the Mercury franchise and style of play, so that's to be expected. I just don't see Taylor making the roster come final cut.

Nyeshia and Tyra looked tentative, but overall looked to be better fitted for the WNBA. Their size is definitely helpful, and once they get over the initial shock of dealing with players that are all the same size of them (whereas in college, they were the ones wrecking havoc), they should adjust better. However, they may not get much of an extended chance to see whether they make the adjustment or not.

When asked how Candice felt about being here in Phoenix and how their style was sitting with her, Dupree offered the following:

It's very, very different, but I'm enjoying it.  Practices are definitely a faster pace than I'm used to, but I'm adjusting well. The city is really nice, the weather's great...for now, but I'm having a good time overall.

Previous training camps for me were typically two a days, training camp was actually longer, it lasted about two weeks. Here I kind of like it better, you know, you're in the gym for two hours, get what you need to get done, and the rest of the day is yours.  The pace is obviously faster, you know, Phoenix is a run and gun kind of a team, so it's been an adjustment, but I'm a quick learner.

Coach Gaines echoed the sentiments he offered during the draft, and as expected, had many good things to say about Dupree and integrating her into the system.

The offense is built around a four, which we've never really had. Penny Taylor played the four, but she's really a three. It's kind of hard to play a three at the four for a whole game, but Candice is a four, so that's what she does.

She brings rebounds, and we've always been down in rebounds.  She averaged 9 a game and was third in the league, and she's an inside threat that demands a double team.  I call her Tim Duncan.  She's the WNBA Tim Duncan.

As we've seen with countless championship caliber teams, sometimes it's easy to take a significant dropoff in production, and some teams won't even make the playoffs the next year. (See: Pittsburgh Steelers) However, bringing together the addition of Dupree, who has never been to the playoffs, and the rest of the competitive veterans this team has (Diana Taurasi, Penny Taylor, Nicole Ohlde) could prove to keep the Mercury right in contention for a repeat.

When asked if Dupree's competitive spirit would help the team, she said, "It's always exciting coming to a two time champion. So, hopefully we can get a back to back championship this year."

If that's not a good sign, I don't know what is.