Asked to pick a player poised to have a breakout season in the 2010 WNBA season, Atlanta Dream coach Marynell Meadors, made what might seem like a strange choice on the surface.

"I think just looking at Angel McCoughtry - I know she was Rookie of the Year - but I think there are bigger and better things coming from Angel," said Meadors in an interview with Swish Appeal in early February. "I just think she continues to get better and better. She's a winner - she'll find a way for a team to win. And she'll carry a team, she's got that capability to carry a team. And I think she will help do that with us."

Of course, McCoughtry's talent is not exactly a well-kept secret. Since winning the Rookie of the Year, she has won MVP at the Ekaterinburg International Invitational, traveled the world while leading Slovakia's Dobri Anjeli in the Euroleague tournament, and represented the WNBA at the NBA All-Star Game. What should be readily apparent by now is that every time McCoughtry is given a new opportunity, she rises to the occasion.

"When you're 21, 22 years old in the league, it's an adjustment," said basketball legend and Phoenix Mercury General Manager Ann Meyers-Drysdale in an interview with Swish Appeal earlier this week. "Coaches and teammates give that to a kid too. You know, how much time you get. Angel McCoughtry was the same way in Atlanta. She came off the bench and wasn't getting playing time until Chamique got hurt. And then all of a sudden Angel was able to show her stuff."

So really, it should come as absolutely no surprise that the rookie who was able to fill the enormous shoes of Chamique Holdsclaw would end up being added to the pool of 20 finalists for Team USA's roster for the 2010 World Championships.

"I tell you what - I'd have to put her on there," said Meadors back in February. "When you put her in the game sometimes she may make a mistake or make a bad pass, but you have to let her get through that. And as soon as you do let her play through that, I'll tell you what, she's gonna put up numbers, in rebounds and assists and steals. She's a great defender and she plays both ends of the court. I would want her on my side, I can tell you that."

As much as any player on the roster, McCoughtry seems to exemplify USA National Team and University of Connecticut coach Geno Auriemma's attempt to, "identify who that next core group may be going forward." So perhaps part of the significance of McCoughtry's selection to the Team USA pool is that it affirms the growing belief that she is poised for greatness not only as a rising star in the WNBA, but also as a key figure in the growth of women's basketball in the U.S. at large.

To the average person, such lofty expectations might be considered an overwhelming burden. However, in talking to McCoughtry it is her response to these increasing expectations that seems to indicate that she is destined for greatness.

"It's not a burden, it's fun," said McCoughtry in a phone interview with Swish Appeal not too long after arriving in Dallas for All-Star weekend. "I'm glad that people say that - it's a compliment. And I'm definitely going to live up to the challenge."

But in case there still remain any skeptics, what exactly has everybody - including Team USA -- so excited McCoughtry?

USA Basketball
I'm striving to be the best wherever I'm playing, and I try to give my all when I'm playing basketball. It's what I have a passion for, and I love playing.

In talking to McCoughtry, her most noticeable attribute is a quiet confidence - as she said about her attitude about performing in front of NBA fans, she doesn't feel the need to prove anything because her game speaks for itself. However, she's not so shy that she's afraid to concisely state how much she believes in her own ability, even as a player who has only started 10 games in her WNBA career.

"I don't look at really the rookie thing and how many years you've played," said McCoughtry. "I think if you're confident and your maturity level as far as your game is on point then you can be a leader."

That firm belief that good things will come with the right attitude and focus on improving one's game while contributing to the team was evident in her first season. Similar to what she Meyers-Drysdale described and the approach to basketball McCoughtry described on the USA Basketball website, her Rookie of the Year campaign was about steady improvement, both due to Holdsclaw's health and her own ability to adjust to the rigors of professional basketball.

At the same time, McCoughtry is clearly not a player who relies solely on natural gifts or injuries to teammates to emerge. What makes her most impressive as a young player is her recognition that in order to reach the greatness she expects, she has to recognize her flaws and work to improve. Echoing what Meadors said about what she needs to work on, what McCoughtry wants to strive for next is consistent performance. 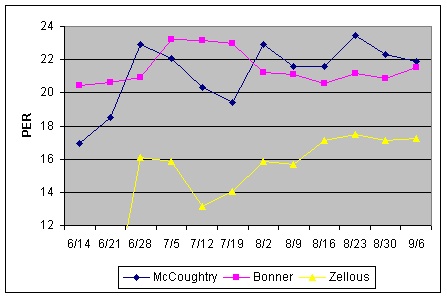 "Last year, I was a little tired - I admit that," said McCoughtry. "I played all the way to the end of the college game then I came straight in - it was a whirlwind - came straight in and played. And I had never played that many games in one week and especially back-to-backs killed me. So one game I might have a great game. Then next game, I don't play so well because I'm tired. But that's why in the off-season, I'm going to work on my consistency with my production now that I've experienced that."

Despite the agreed upon need for her to work on consistency, part of what has people excited about her second season is that constant upward trajectory. While her performance was erratic last season by her own admission, it's clear that she's consistently trying to get better. And having one of the most well-known women's basketball players in the U.S. as a mentor only helps.

But perhaps the thing that best exemplifies what makes McCoughtry's improvement exciting to watch is the report that she is now able to dunk, as first mentioned by Ken Murray of the Baltimore Sun. When she mentioned it in passing, before the celebrity game at NBA All-Star weekend, I actually laughed thinking she had just deadpanned a joke.

"In the celebrity game, I'm excited to dunk on celebrities," said McCoughtry without any trace of laughter, when asked what she was most looking forward to in Dallas.

When you think about reasons to be excited about McCoughtry's second season, it's not really about whether she can dunk - if she never breaks it out in a game, I won't feel lied to. What's so striking is the supreme confidence she has in herself to be a star, leader, and eventually WNBA champion on a team that has only existed for two seasons. It's not just that McCoughtry expects to be great, it's that it never occurs to her that she won't be great as long as she continues to focus on improving her game.

That's the stuff greatness is made of.