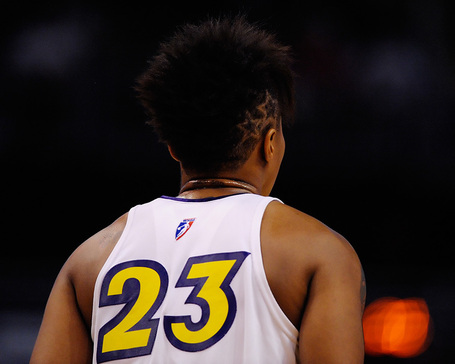 If you are a fan of the WNBA then you've heard the rumors about a possible blockbuster trade that would send Cappie Pondexter to the New York Liberty for Nicole Powell and possibly other players.

This morning I caught up with Phoenix Mercury GM Ann Meyers-Drysdale who was in Los Angeles.

Asked to respond to the Cappie trade rumors she said this:

"Nothing to report as of yet. I have every intention of hoping to bring Cappie back. She is a restricted free agent and we would like to continue our championship run with her and Diana and hopefully bringing Penny back and Temeka and Ohlde and Tangela. I knew that with Le'Coe it would be difficult to bring her back because of the the structure of the salary situation. We're still talking to Cappie and I'd love to bring her back."

Ann didn't deny that discussions went on and said that she hasn't talked directly to Cappie but is in contact with her agent. She stressed several times that things change quickly which to me implied that trade talks might have occurred at some point but could have gone in another direction by now.

Cappie is a restricted free agent which means that the Mercury have the opportunity to match any offers made to the all-star guard. So far, no other team has made such an offer. The more likely scenario would be that a team would need to clear some salary on their end to fit Cappie under their cap. That would result in a sign-and-trade in which the Mercury sign Pondexter to a long term contract and immediately trade her to another team.

The Mercury, like most teams, are in what Ann described as a "tailspin" in reaction to the league's decision to cut the salary cap for this season.

"That's what I'm working on," Ann said about the Mercury's current cap situation. "I have to juggle some things. We are still in the process of working things out with our people and we'll be moving pieces and looking at different salaries and so forth."

Listening to Ann talk, it seems clear that her intent is to keep Cappie and the entire core of the championship team together but the reality might not allow that, "Certainly we want to work it out so she (Cappie) can stay in Phoenix."

When asked if she could put a percentage to her certainty that Cappie would return Ann would only say, "Not right now. I'm just not in a position to answer that unfortunately."

So we wait and hope that Ann is able to juggle the finances in such a way that allows the team to return intact. Barring that, and it seems unlikely, we hope that if Cappie has to leave it is done via sign-and-trade that brings back talent in return.

A Mercury team without Cappie Pondexter would not be the same but that doesn't mean the new group wouldn't be competitive if the right deal is done.