Oregon Seniors Say Goodbye to McArthur Court: "It's not all high-tech, it's Mac Court"

Share All sharing options for: Oregon Seniors Say Goodbye to McArthur Court: "It's not all high-tech, it's Mac Court"

Whether it be Stanford University, St. John's, or Seattle University all senior day/night ceremonies are special in their own way.

At the University of Oregon on Saturday, the most emotional part occurred before the game for their three seniors - Micaela Cocks, Taylor Lilley, and Lindsey Saffold -- occurred behind the closed doors of their locker room. 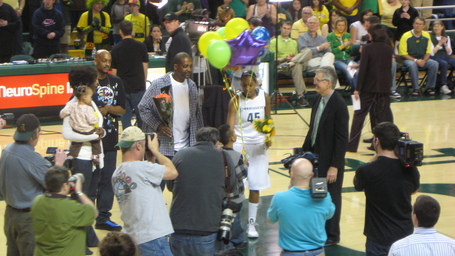 "When I first came into Mac Court earlier today the juniors and sophomores and freshmens, they did a great job," said Cocks. "They decorated our lockers and had photos on our locker doors. And I was thinking I was not going to get emotional but as soon as I saw it and they were like, 'Surprise!' I was just like tears running down. So that was probably one of the most emotional moments, so it wasn't seen because it was in our locker. And then It was just a weird feeling -- I don't know how to explain it. But, yeah -- it was exciting with all the fans there and cheering the moment. It's unfortunate we lost -- we fought hard and we just ran out of gas at the end." 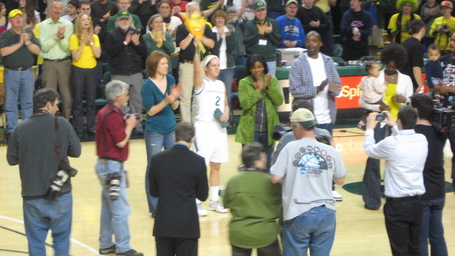 Senior Micaela Cocks with friends during the ceremony

Although UCLA's 91-75 comeback win put a damper on the occasion in front of a crowd of nearly 3,000 that seemed willing to explode, Oregon coach Paul Westhead hoped the outcome of the game wouldn't diminish the experience for his seniors.

"After the game after we talked a little bit about the game I acknowledged and spoke about Lindsey, Micaela, and Taylor," said Westhead. "It was a great career for all three of them and I wanted to make sure that this game did not totally make us forget their achievements. They will be sorely missed."

Regardless, this Senior Day wasn't quite as moving on the surface as some of the others you may have read about. There were no tearful speeches during the pre-game ceremony, no presentation of framed jerseys, and the day ended in a loss. Nevertheless, it was special for another reason - it was the final Pac-10 conference women's basketball game to be played at McArthur Court.

As such, it was one of many major goodbyes to "Mac Court", the second oldest college venue in use, not to mention one of the best atmospheres.


Video of the final moments of Pac-10 women's basketball at McArthur Court.

"I don't know, it's just the environment, the atmosphere," said Cocks. "When the fans come in -- even when we don't have a huge turnout -- it's so loud. And something about the way it's built or something it sounds even louder than it is. And I really like the old- -- oldness, is that a word? -- I like how it's old. And it feels good and I feel so comfortable walking in here."

Although UCLA effectively took the Oregon crowd out of the game on Saturday, when the place does get loud you can feel the voices of the crowd reverberating off the wooden interior of the building. As described by Brian Smith of the Oregon Daily Emerald, when the student section really gets rocking, the vibrations from their feet can literally be felt on the court.

"I just love the floor and just having the fans right on top of the floor," said Lilley. "I think that's the really neat thing because you feel like they're with you while you're playing. And so when things are going well there's nothing like it. And just the energy that it brings -- it's so much fun to play in. And like I said, I just love shooting here." 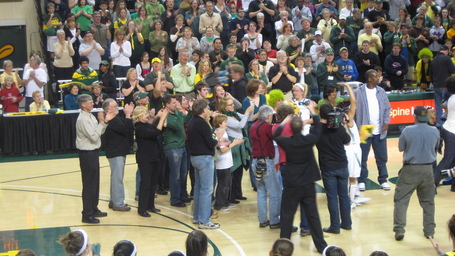 Lilley's entourage that accompanied her onto the court for the pre-game ceremony.

As described by Bill Kintner, Mac Court can give you chills Mac Court even when there's no game being played in the building. Walking in for the first time this January, I immediately felt like I had stepped into a scene from Hoosiers. While sitting in that building to take in a game, it's hard not to appreciate not only that the place has played host to decades of basketball before you, but also that it was designed in an era when it was almost impossible to imagine the comfort, technology, and media presence that we have come to expect today.

And yet Mac Court is still a venue for Division I games for one simple reason - somehow the venue seems perfectly tailored for the game of basketball. That such a simple place can play host to a sport that has grown from a game for boys to an international multi-billion dollar industry is a reminder that at its core there are some timeless elements of basketball that fans can appreciate across generations.

If "Basketball is Basketball", then there's no need to take special note of Mac Court's significance to women's basketball specifically. It's simplicity is a reminder that there are some core, timeless elements of basketball that fans can appreciate across generations. If the purists are right and there is such a thing as "pure basketball", Mac Court seems to emanate it. And perhaps that's what makes the place unique - it's a living shrine to no-frills basketball. 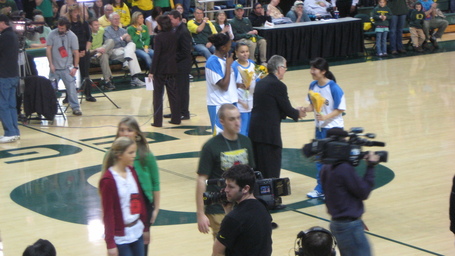 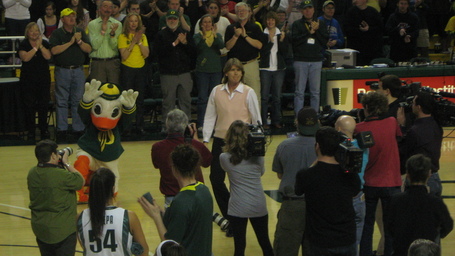 Oregon Hosts USC & UCLA In Final Pac-10 Games At Mac Court - GoDucks.com - The University of Oregon Official Athletics Web Site
UCLA – Feb. 27, 2010 A two-time Kodak All-American and three-time Northwest Basketball League Player of the Year, a former player and head coach, Bev Smith will be the honorary captain for the Oregon-UCLA game – the final Pac-10 women’s basketball game to be played at Mac Court. Smith was a pioneer for women’s athletics at the UO, playing from 1979-82. During her career, the Ducks made three postseason appearances and accumulated an astonishing record of 93-19. Smith remains the program’s all-time leader in rebounds, steals and double-doubles and is second all-time in scoring.