Maggie Dixon was an assistant coach to Doug Bruno at DePaul University, and looked upon as one of the great young coaches; an up and coming assistant coach with a promising future. The sister of Pittsburgh men's basketball coach Jamie Dixon, Maggie was the choice of the West Point hierarchy to move the program into the top tier of the Patriot League.

No one expected her to do that season what she did, leading the team to a 20-11 record and winning the Patriot League conference tournament to earn the automatic bid to the NCAA tournament. I know I will never forget the scene when they won, with the Cadets storming the court, and carrying coach Dixon off. I still get chills when I just see the image, one of the great ones in sports history in my opinion. 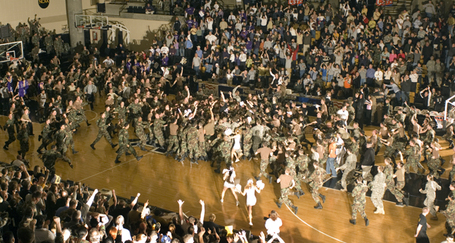 Dave Magarity was Maggie's assistant coach, and is now the head coach of the team. He was a guest on the Dishin & Swishin show, and he discussed Maggie and that infamous scene.

Maggie Dixon made such an impact, in such a short time, that she has been honored in so many ways. The most important is probably the fact she is buried at West Point Cemetery, an honor normally reserved for high ranking officials. There is the Maggie Dixon Award given each year as a sort of "Rookie of the Year" award for coaches. 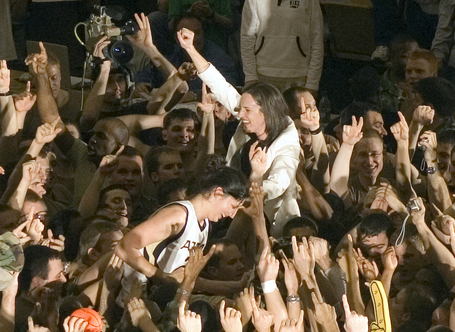 The most famous and well known tribute though, is clearly the annual Maggie Dixon Classic, held annually.

The first Classic was held in 2006, and featured a men's and women's game and was held on West Point's campus. Brother Jamie Dixon brought his Pitt team and there was also fundraising for heart arrhythmia research and a Health Fair featuring information booths and free screenings. The next year the Classic was moved to the World's Greatest Arena, Madison Square Garden, and became all women's teams: Army, Duke, Pitt and Rutgers. The third year, 2008, featured Army, UConn, Penn State, and Rutgers.

In 2009, things changed though. That year, the teams participating were Baylor, Boston College, Rutgers and Tennessee. It's clear that the organizers of the classic are pursuing the "big fish" in the sea...getting UConn, Duke, Tennessee, Baylor, and this year adding Ohio State and Texas A&M. It's nice that Rutgers and Hall of Fame coach C. Vivian Stringer have been included each year since 2007, to add some local flavor to the event.

This year the Maggie Dixon Classic will be held Sunday, at Madison Square Garden, and features two outstanding games: Texas A&M vs. Rutgers and Ohio State vs. Connecticut. Of course, the extra rub and attention is on because of UConn's attempt to tie the UCLA record of 88 consecutive wins in their game.

But what's missing is glaring. How can they hold this event, named after the Coach at West Point, and not include Army? I mean, come on, Maggie Dixon's one head coaching job was at West Point. She loved the school and is loved by it in return. They started the Maggie Dixon Classic. The first event was on campus. Who said it only has to be a doubleheader? In talking to Coach Magarity, he commented why not make it a triple header, and schedule a first game between Army and someone like Fairfield University? This is an opportunity for the student athletes to play in Madison Square Garden, an opportunity most will never get otherwise. They are an incredible group of student athletes that go through so much, and sacrifice so much, to be members of their team. It should be an absolute no-brainer that Army should be included in the very event named for their former coach.

Jamie Dixon himself said recently, "Maggie would always come to the Big East Tournament when the Pitt men played and really appreciated how wonderful it is to play in Madison Square Garden. She always dreamed that one of her teams would someday play there. So to have a women's game nearly sold out at the Garden would make her very excited for the sport." Here is Coach Magarity himself on playing in the Maggie Dixon Classic:

As her brother said, Maggie Dixon dreamed her teams would play at the Garden. This is something that can happen and should happen each year. Hopefully, next season this wrong will be righted, and the Black Knights of Dave Magarity will be tipping off the Maggie Dixon Classic. Maybe with the extra rub an annual visit to MSG can bring, we can also see a team picture down the road like this one: 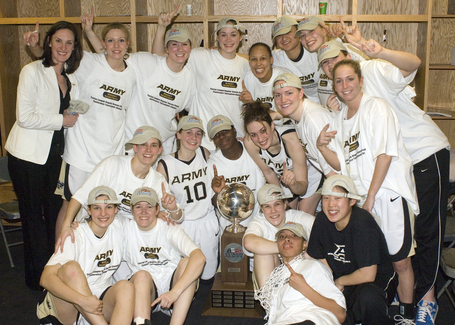