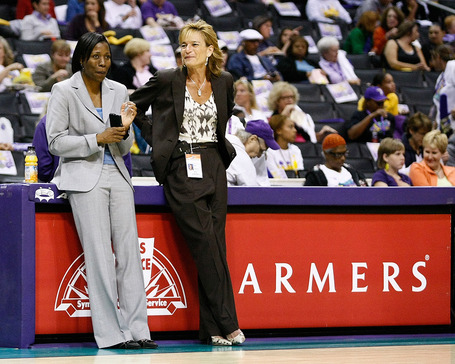 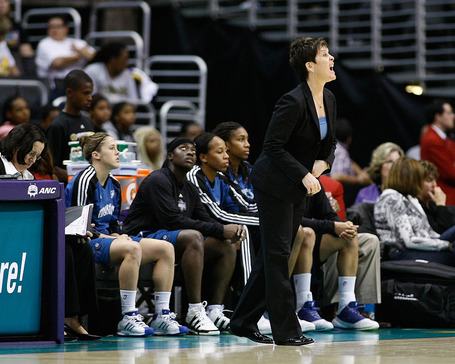 After the most successful season in Mystics history, how did GM Angela Taylor and Coach Julie Plank (above) end up unemployed?

This afternoon a press conference was held by Dr. Sheila Johnson, owner of the Washington Mystics, announcing the hiring of Trudi Lacey as the Coach and General Manager of the franchise.  It was quite a press conference, at times confusing, and always intriguing.

Below are some points transcribed directly from Dr. Johnson's remarks and answers (Dr. Johnson's direct quotes are all in italics).


We’re very proud to announce Trudi Lacey will be our new General Manager and Coach, I’m thrilled about it, and I’ve known Trudi for a while, and I knew her through of course the Charlotte Sting,  and for anybody who’s had any doubts about Trudi, she is just an amazing woman who's really going to be terrific in the community at large and she also brings just a wealth of experience in coaching.  When she was with the Charlotte Sting unfortunately she was with an expansion team that really didn’t put the effort behind the talent that Trudi has, but I do know her personally -- I know her abilities, and she’s going to be absolutely terrific.

EXPLANATION OF THE HIRING AND WHAT HAPPENED WITH JULIE PLANK

We entered into contract negotiations with Angela once her current contract expired, and we were unable to reach an agreement with her.   We were in discussion with Julie about a joint GM/Coach role as well as our philosophy moving forward.  But unfortunately Julie only wanted to coach, she did not want to be a GM - I’ll say it again, she only wanted to coach - and we both agreed that a change would be in the interests of both parties.

Dr. Johnson continued, citing Lacey's familiarity with the team and also mentioned that they hope to have the entire coaching staff back.  An offer has been sent to Marianne Stanley,  but has not yet been accepted.

EXPLANATION OF WHAT HAPPENED WITH ANGELA TAYLOR AND WHY

We wanted to keep Angela, but we just couldn’t get to a decision with her on how she wanted to move forward.  You have to understand that across the league a lot of the teams are starting to move into this model.   You have to understand we have been in a recession, and it is really hurting all teams across the board and we have budget constraints now that we have got to start looking at and everyone is fully aware that we have got to make decisions, business decisions, that are going to keep our league alive, um, and keep the Mystics alive.   This is about business, and of course we’re going to have to continue to tweak to make things work, and that’s what people have got to understand.   It’s not a black and white issue.  This is about business.  It’s that we’re trying to put best foot forward in our front office in order to make everything work, but we also have to keep the team on the floor, we have to keep the business model alive.  In this recession it’s not just us, it’s all businesses across the country that are having to tweak and make very hard decisions and this is a decision we decided we had to make.

Dr. Johnson was asked to confirm that after the most successful on court season in team history, that she was replacing the Coach and General Manager as a "cost cutting decision."

A COST CUTTING DECISION "TO KEEP THE FRANCHISE ALIVE"

Definitely, we had to make some cost changes.  Even though we were successful on the floor, you have to understand, we weren't successful on the business side and we just have to make these changes in order to keep the franchise alive.   My job as a partner with all of this is that I really have to present to my partners as President and Managing Partner of the Mystics is I present a budget to them - they're going to understand we had to do some cost cutting and it's not just us - it's all the teams.  We have taken over a franchise that we are very excited about but we also want to make sure that we are financially smart with what we're doing.  It's not just us that tweak: the Caps tweak, the Wizards tweak, every team across the country is tweaking something somewhere to make it work

We just came to this decision about 48 hours ago.  It's not appropriate to sit up there and let our fans know every little move we're making, that's not good business, it is not appropriate, and the fans I hope at this point are going to trust in us, and trust in me, in our decision.  We are doing the best that we can to make the Mystics a solid and viable franchise.

One of the more confusing things was Dr. Johnson's statements about the fact that the job would have stayed in two parts, if Angela Taylor had agreed to terms, but then became one as a cost cutting measure.  Dr. Johnson was asked several times about this, and elaborated like this:

MORE ON COMBINING THE POSITION INTO ONE GM AND HEAD COACH

I don't want to go into the dollars and cents, but we had to cut the amount of the contract, we had to bring it down a little bit, and that's where things....you know....[started to become uncomfortable, so reporter apologized and asked her to just explain how it became one position]...I'll make it really idiot proof for you.  We offered Angela a contract; not the one she's usually with and she didn't want it.  Okay?  So then I went to Julie, I offered her both the GM and coaching role.  She didn't want to do it.  So, to make a long story short, we've now got Trudi as Coach and General Manager, it's as simple as that.

Dr. Johnson also explained she called her ex-husband, Bob Johnson, the former owner of the Sting, and he raved about Lacey.

THE STING AS AN "EXPANSION FRANCHISE"

ESPN's Mechelle Voepel commented to Dr. Johnson about her twice referencing the Sting as an expansion franchise.  Dr. Johnson disagreed with Mechelle.

You don't understand, the NBA team moved to New Orleans.  When I'm saying it was an expansion it's because you have to understand it was really up from under the NBA team, it was not a team that was on its own.  So when you have a new owner, that is starting a whole new NBA team that took on that WNBA team so it's considered an expansion franchise.  When the Charlotte Bobcats started up they then took the Sting, I know they'd been in the league, but you have to understand because they were with the new NBA team they didn't have the tools to even want to carry that team forward.  They were holding onto it so they could get rid of it.  What it means is Trudi had no support whatsoever.  However, she did the best with what she could do.

That's where we stand WNBA fans.

I have nothing personal against Trudi Lacey.  In fact, I've found her to be very nice when I had met with the Sting.  However, If the goal is to generate a buzz about a team though, getting a previous proven champion (like the Liberty did) or an exciting name (like the Sky did) seems like the best path. However, the Mystics hired a coach from a failed franchise with a losing record.  How is that supposed to excite fans that are just starting to get behind the team again?

It's a difficult place for GM Lacey, who has been thrown into the unenviable spot of having to put together the team in this climate for Coach Lacey.  I hope for Mystics fans she's successful.