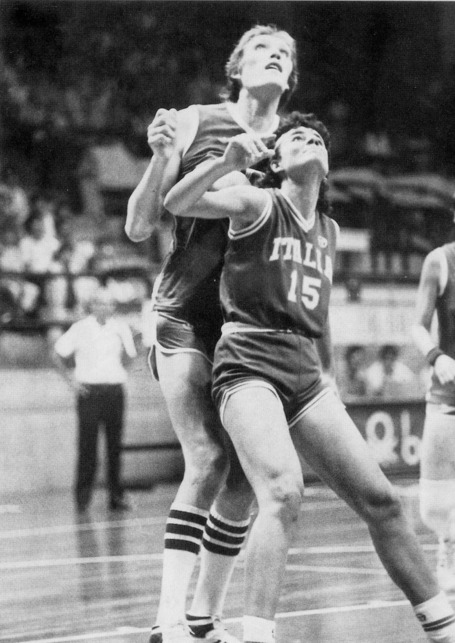 If you ever saw an almost 7 feet tall figure wearing USSR or TTT Riga uniform in the 70ies and 80ies, you knew it was going to be a long night. That's because you were playing against Uljana Semjonova - the most dominant player in the world for almost two decades.

All these accomplishments can be found in many places, but that's not why this post is here. It's here to tell her story that's rarely known on the West side of the former "Iron Curtain".

By reading her name you might think she's a Russian player, but you would be wrong. She was born on the Lithuanian side of a border between two former Soviet Republics - Latvia and Lithuania. But she was there only the first few days after her birth, soon after she was taken home a few miles on the Latvian side of the border. Although her looks would lead you to think that she's a product of Russian scientists, she's not - Uļjana has acromegaly which leads to gigantism.

Having lived all her youth in a rural part of the country being a 6'3' tall 13 year old, she had never held a basketball until her physical education teacher recommended to basketball coach in Riga to come and take a look at her. The coach loved what he saw, but it took a few months to persuade her to move to the republic's capital where it wasn't all that better either - she was placed in a soviet style boarding school where she had to live in a room with 15 other children. Like almost any 13 year old would, at the beginning she wanted to quit and go home to her family. But that lasted only until she found love for the game after she started to excel being a 14 and 15 year old playing with and against adults.

It's hard to imagine a situation nowadays when a club team stays in tact for more than 15 years and dominates both Europe and a part of Asia that was in the USSR like TTT Riga did back then. And although she was the centerpiece of that team, Uljana gives all the credit to her teammates who often had to guard 4 on 5 because TTT used a zone defense which was countered by opponents having all 5 players standing outside and passing the ball around until they got an open look.

That's also a big reason why it hurt her so much that none of her teammates, from the best team of the continent, got asked to play for USSR in international competitions. Reason for which was plain and simple - politics - Russians wanted the core of the team to be Russian with 1 player from 3 or 4 other Soviet Republics even after Russians lost to Latvia which consisted of TTT players in a championship between National Teams from all Soviet Republics. But that didn't matter to the Russians because even without having all the best players available, USSR didn't suffer a single loss with Semjonova playing, although there have been several close calls.

Like the 1983 World Championship Final in Brazil against USA where she fouled out in a game where all of the USSR starters got at least 3 or 4 fouls by halftime and the game had to be stopped for several minutes to clean up the floor after Brazilian fans in the stands started to throw everything they could at the refs after seeing such biased refereeing. After her fouling out the USA rallied behind Anne Donovan (who by the way Uljana admits was the hardest player to play against) to tie up the game only to be denied 3 seconds before the end of the game by step-back jumper by Elena Chausova.

That kind of refereeing wasn't anything unusual to her. Majority of the referees tried to compensate for her size advantage with allowing opponents to get away with almost anything while playing against her.

Her favorite memory is winning her first gold medal in Olympic games in Montreal. But she's also frank about it, admitting that there wasn't anyone who could have competed with them even for a half a game so she barely averaged 20 minutes per game.

Her undefeated career on the team USSR ended suddenly before the 1986 World Championships that were hosted in the USSR, after she was cut shortly before the start without ever receiving any explanation. She remembers that after going to see team USA play and them finding out in disbelief from her that she's not playing, they were so happy as if they've already had won the championship which they eventually did.

Now she's running a social fund that helps to support former athletes in Latvia and can be seen with her former teammates attending games involving Latvian National women's basketball team.