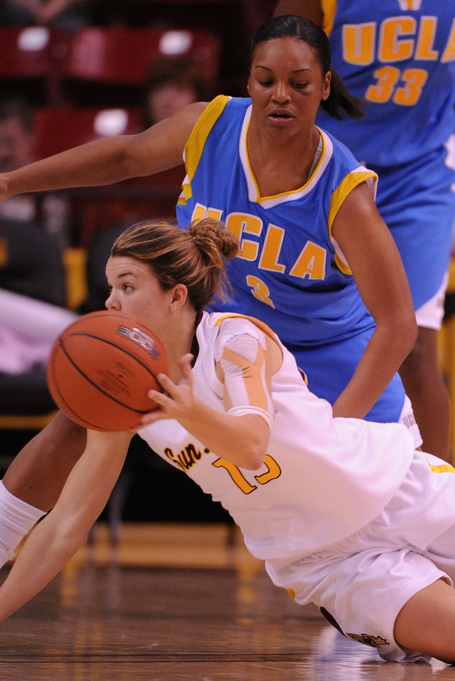 The Sun Devils, who came into this game ranked 19/17, looked confused in their offensive sets from the tipoff, not sure if they knew what each other was doing.  The result was 27 turnovers in which UCLA scored 29 points.

Defensively, ASU would allow the Bruins to penetrate the lane, giving up easy buckets.  When Sun Devils head coach Charli Turner-Thorne, who is seeking her 300th win, had the women apply a defensive press, UCLA responded by passing over the top for wide-open layups.

Becca Tobin led all ASU scorers with 13 points, followed by Danielle Orsillo with 12 points.  In a happier moment before the game, Orsillo received her 1000th Career Point Ball Award from Turner-Thorne during a pregame ceremony.

UCLA’s Markel Walker and Jasime Dixon scored 24 and 21 points respectively, both career highs.  In the process, both forwards combined for 19-24 from the field, the majority of those shots were wide open looks in the paint.  The Bruins incredibly scored 50 points in the paint, compared to only 20 for the Sun Devils.  Walker and Dixon also combined for 18 of UCLA’s 31 rebounds.

For ASU, rebounding and free throw shooting improved over the weekend from the USC game to this game.  Tobin grabbed seven boards; Tenaya Watson and Janae Fulcher each had four.  Orsillo scored eight of her 12 points from the free throw line; Kali Bennet missed one free throw in eight attempts to finish with seven points for the game.  Tobin added five points from the line to her 13 points.

ASU is still reeling from the loss of Briann January to graduation.  Senior Dymond Simon was supposed to team up in the backcourt with Orsillo (also a senior), but was injured early in the season and is out for the year.  Simon’s absence leaves an experience gap at the guard position.  Orsillo was forced to move to the point guard position and sophomore Alex Earl and junior Tenaya Watson have taken over the 2 position.  Earl and Watson were a combined 2-8 from the field, had for assists and turned the ball over eight times against the Bruins.

Turner-Thorne is hoping a home loss of this magnitude, in front of former Sun Devils players, can shake up this team.

"I think our team needed to go through this," said Turner-Thorne. "I think they needed this game to figure things out because we really haven’t figured things out. …I really like this team.  They know they aren’t doing the things they are supposed; they’re not happy about it. …But, at the same time, obviously, it’s not good enough."

Pressed, the coach would not lay blame to any one person or group of position players: "It’s a collective stinking it up…a collective not playing to your ability."

And stink they did.  ASU shot 25 percent in the first half; 34 percent for the game.  The Sun Devils were 1-11 from the three-point line.  ASU had only 20 points in the paint, 10 second chance points, and four fast break points.  The lone bright spot: 22 of the Sun Devils 56 points come from the bench.