Phoenix Mercury Free Agency Breakdown: How Much Do the Mercury Need Willingham?

Share All sharing options for: Phoenix Mercury Free Agency Breakdown: How Much Do the Mercury Need Willingham?

Although WNBA fans don’t have easy access to salary numbers and contract lengths, one of the most exciting parts of being a sports fan – besides the joy of watching the game – is the hope found in new possibilities for the new season. Part of that is the opportunity to add talent through free agency.

But how much do you really want to tinker with a team that has won 2 championships in 3 years?

Probably not much, but it’s exactly the dilemma the WNBA champion Phoenix Mercury face as free agency opens.

In a December interview with Swish Appeal, Phoenix Mercury GM Ann Meyers-Drysdale suggested that she would like to bring everybody back, but might not be able to because of salary cap constraints.

Ann Meyers Drysdale: Mercury Not Likely To Return Full Championship Roster - Swish Appeal
The priority for Ann will be to bring back as many core players as possible and replicate the continuity with veterans that sustained the dynasties in Detroit, Houston and Los Angeles. Asked specifically if there was a chance that Penny Taylor and/or Cappie Pondexter wouldn't return Ann had some encouraging news for fans, "I'm not looking at that. I don't even question that they'll come back. We'll have the salary for them." In addition, Ann stated the bringing point guard Temeka Johnson back was also a priority.

Based on the interview, the Mercury figure to keep most of their major players around. But hypothetically, what is the cost of losing any one of these players, not only in terms of talent, but in terms of the player’s function and contribution to the team?

Today I’ll begin a series on WNBA free agency by looking at the Mercury, a team that arguably has the biggest decisions to make, but stands to change very little. Looking at it from the perspective of player styles also brought up a question for me – how much do they need Le’Coe Willingham, given the financial constraints that Meyers-Drysdale describes?

Rather than merely saying that they would miss Willingham’s 10 ppg and 4.2 rpg, I think the player styles might help us those of us less familiar with the team than Phoenix Stan make stronger statements about her role on the team and how to approximate the best way to replace or enhance her role.

First, it’s helpful to take stock of the combinations of players the Mercury had last year, including restricted and unrestricted free agency.

For a description of these numbers, please see yesterday’s post.

So the majority of the Mercury’s minutes – over half -- go to scorers of some type and Diana Taurasi, who is a versatile mixed player but obviously scores every now and then. 56% of their overall production was accordingly from their scorers.

Added to that are post players who do look to score in Bonner and Smith. Johnson sort of made the system go as a distributor, but is also a capable scorer.

So can we say Phoenix is a scoring team? Yes. But more interesting is that they are a very versatile scoring team, possessing everything but a dominant post-up scorer.

Strange as it may sound, Willingham is the only "pure scorer" on the Mercury in the sense that scoring is what she tends to offer most. She isn’t necessarily a poor rebounder – her offensive rebounding rate last season was solid – but she only averaged 4.2 rebounds per game on a team that puts up a lot of shots.

Assuming DeWanna Bonner improves and Taylor is around for a full season – thus adding to the 4% of the team’s total production she had in 14 games last year – Willingham’s scoring might not be needed.

What do the Mercury need?

Willingham is labeled a scorer because she’s not necessarily a strong presence in the post in terms of rebounding or blocks. As an undersized forward, it does make sense that she would have trouble both rebounding and defending.

Given that the Mercury had the lowest rebounding percentage and second chance points in the league, it’s logical to think that one area of improvement for the Mercury would be rebounding. However, looking at a four factors analysis, it’s clear that rebounding is not actually the problem – they actually outrebound their opponents.

So the biggest "problems" were free throw rate (how often they get to the line) and turnovers, two things that Willingham does actually bring to the team.

So hypothetically, if they were to lose Willingham for financial reasons or Willingham choosing to go elsewhere, how might they replace her? 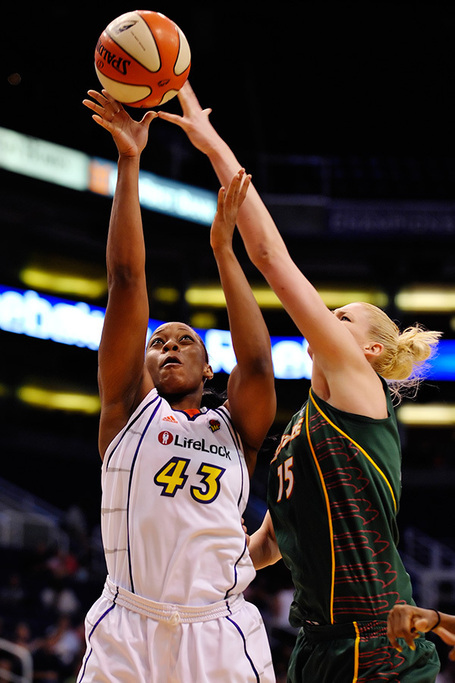 Looking over the playing styles of the available free agents (click here), two players jump out as interesting replacements for Willingham.

However, both are restricted free agents and both would give the Mercury a little bit more of an interior presence and a little less scoring, which might be a reasonable trade off.

An interesting, though unlikely, fit might be Candice Dupree, a "post presence" who can score and also work inside on the boards. She can certainly get up and down the court and averaged 7.8 rebounds a game last season, a definite potential upgrade from Willingham’s 4.2. Dupree is also a better shot blocker than Willingham, which would bring a defensive presence to the Mercury’s zone defense. However, Dupree was actually only slightly better as a rebounder by percentage than Willingham (13.75% vs. 11.08%) and worse as an offensive rebounder by percentage (13.10% vs.17.40%).

The problem is that they’re already a very talented team and Dupree would simply cause a log jam in the rotation. And of course, as an all-star, Dupree is likely to command more money on the market than Willingham, which is less than ideal if the Mercury team that has stated that they may not be able to keep everyone due to financial constraints.

It’s really not a feasible option, though perhaps fun to think about.

The second – and perhaps a more feasible option – might be Jennifer Lacy. Lacy is an athletic forward who rebounds at about the same rate as Willingham (11.31% rebounding percentage, 16.64% offensive rebounding percentage). But she’s also 3 inches taller, meaning she could probably serve a similar function while doing a little bit more on the defensive end.

The problem is that Lacy is also a much less efficient shooter in almost every way, except from the three point line, where she shot 21.1% last season compared to Willingham’s 12.5%. Do the Mercury really need more three point shooting? They will get more of that this coming season from Taylor (assuming they re-sign her), but perhaps it would help to have another three point shooter on the roster to spread the defense…?

Bringing Kelly Miller back could be interesting as a backup guard who can run the offense for a few minutes per game, but with Johnson and Swanier already under contract, that doesn’t make much sense. Adding another scorer like Hamchetou Maiga-Ba or Belinda Snell could certainly be interesting, but this is not a team that necessarily needs a less interior oriented player from that spot. Maiga-Ba would be particularly interesting in that she is a well-respected perimeter defender in addition to being able to score.

The other option – the much cheaper option – if Willingham left would be to just draft a player or pick up a rookie after the draft. Willingham’s 20 minutes could easily be absorbed by Bonner, Taylor, and perhaps a few more minutes spread across the roster.

Ultimately, the trouble is that Willingham might be the best fit on the market given the team’s style of play.