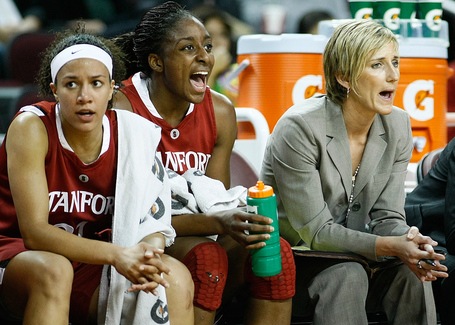 Well, the Washington State game went pretty much as expected and C and R could write a boring post about how we dominated, which I am sure we will do anyway, but don’t stop reading until the end because the most exciting thing happened after the game.

C and R got to meet Mr. Tinkle.

Really! No lie! And yes, he is an actual person who does exist. And so nice!

Okay, we are getting ahead of ourselves. Slog though the details and then stick around to the end.

When C and R get inside Maples Pavilion for the Stanford Women’s Basketball Team vs. Washington State, the first thing C notices is Hannah Donaghe is out of the "black sweat suit of injury" and suited up for the game. Yay! She has been out with a torn ACL for almost a year now.

And there’s Mel in tights. Guard Melanie Murphy, who has been fighting off a knee injury, is in black tights, probably to keep her muscles warm. We know all about that from the time R had torn her calf muscle playing basketball and she had to wear similar gear to keep her muscles warm and avoid reinjury. But oh no, other guard JJ Hones is wearing the black sweats. Her knee is giving her trouble again. Not good.

Nneka Ogwumike wins the jump and we are off to the races. It starts out being a Nneka highlight show. She is everywhere, scoring at will. A pull up 15-foot jumper, because no one expects it, driving in and leaping practically to the rim over smaller players. Center Jayne Appel, playing at the high post to give Nneka room to create these incredible drives passes up a chance to score and feeds it to Nneka coming closer to the basket for a rebound. The next two times Nneka tries to return the favor to Jayne by passing up shots to pass it back to her, but she is forcing it and both times it leads to turnovers. R loves the unselfishness of Nneka’s play, not caring to just pad her stats against a smaller team.

Then we see Nneka holding her right elbow and grimacing in pain. She keeps her elbow limp at her side for two offensive series. We want to rush onto the court and call timeout, as protective of her as we are the little girls we coach. She finally does get subbed out and her elbow taped, comes in, then has to go out again to put a protective sleeve on it. Will this be a problem? For Nneka, no. She goes back to being a one-woman highlight show, jumping so high for rebounds and shooting at the top of her leap and making just about everything. And this one steal where she jummped through the air, breathtaking.

Joslyn Tinkle comes in around the 15-minute mark and C and R defiantly shake their tinkle bells. Well, it is hard to look defiant shaking cute little tinkle bells, but we reported in our last post that a fan wrote in saying noise makers are banned from basketball games and now C’s grand experiment is to see how long it will be before she is kicked out of a game for a tinkle bell. No one really seems to notice or care and C is disappointed.

Okay, you know when you go to the Opera or the Symphony or a play…what, why yes, C and R are cultured, we don’t just eat, sleep and play basketball… well okay, we do the eating and sleeping part... a lot… wait, where was I going with this? Oh yeah, so if you come late to the Opera, Symphony or a play, they won’t seat you until there is a break in the action, like the fifth movement, the second act, or the fat lady sings, and C and R would love it if those rules applied to basketball. People always come to the game late, always next to our section and stand for five minutes with tickets in hand asking, "Is that our seat, is that our seat?" blocking our view of the action on the floor. Then C and R look like that classic bobbing bird toy leaning forward and back to try and keep up with the action.

It happens once again to us, and then a few minutes later, two more latecomers stand right in front of our row! C rolls her eyes and R says isn’t that our friend, the one you play basketball with on Wednesdays? Yes, it is our friend, we will call her N, so we now feel compelled to shout, "Down in front," and "You are not allowed to sit here, you bum!"

Yes kids, being friends gives you license to be cruel. N looks up and smiles at the cruelty and says, "What are the odds of us seeing you guys here? And sitting in the same row?" N and her friend A are sitting in the same row as us, but four seats away. In between us is another long-term season ticket holder, here without her family this time, and we are rude all night shouting down the row at each other. Apologies to her!

C asks N if she brought any tinkle bells with her and N answers no, C reaches into her bag of extras and passes down two. C tells her to ring them whenever Tinkle touches the ball. Tinkle is, in fact, is in the game at this moment and dives on the ground for a loose ball. She lands hard, but C and R love her hustle. C shouts down to N to shake her tinkle bell for that play. N shouts back, "Which one is Tinkle?"

C apologizes again to our fellow ticket holder that N is really not much of a basketball fan and we don’t know why she bothers coming to the games… N would punch C if she were closer, but if we can’t tease our friends, who can we tease? N pantomimes drinking and mouths, "Wanna go out after the game?"

It is a school night for C and R, but we mouth back okay because N is about the funniest person we know and could probably write this blog ten times better! We shout different locations back and forth at each other, not hearing a word either of us says and then guard Melanie Murphy comes in and is driving to the hoop! We love to see such aggressive guard play and hope she can stay uninjured in her tights.

Half time is 42-19 and the Stanford band shout "2X plus 4, where X is your score!" If C had known there was going to be algebra problem-solving she would have brought a calculator, the one her son "forgot" to bring to Algebra II all last year.

The second half opens with Washington State scoring the first 6 points and us going scoreless for the first three minutes. Oh no, we hope this is not repeat of the last two games where we are up by a lot at half and let them back in the second half. Not to worry. Nneka keeps scoring and Jayne keeps blocking. Jayne would end up with 6 blocks, matching her career high.

Then, at about the 17 and a half-minute mark, a pile of players goes down, with Jeanette Pohlen at the bottom. She is down for a long time and C thinks it might be a concussion. She sits up and it is clear she is in pain. When she does stand up, she puts no weight on her ankle. Oh no, she sprained her ankle against Cal as well, and we hope this is not serious. She makes her way to the locker room and we don’t see her the rest of the night. Injuries never come at an opportune time, but with almost all our guards banged up, this could be very hurtful.

The subs come in a little earlier than usual and we are glad to see our starters get some rest. One distressing thing was Kayla Pederson’s shot. She uncharacteristically missed a lot. She was 4-12 from the field, including missing all 4 of her three-point shots. Hmmm, that’s two games in a row she has not shot well. Let’s hope that gets corrected. She did end up with 13 points and 10 boards, always a contributor.

We tell N and A to spread out for the red victory balls and tell them to knock down anyone who gets in your way, much like N plays basketball! None get thrown to C and R, bummer, but C sees a red ball hit the empty seat right in front of N and she doesn’t get her hands on it. It falls to the floor and someone else scoops it up. OMG, she had a chance and she missed! Just like she plays basketball! No, really, C can kid N because one, she is her friend and two, N admitted she NEVER HAS READ OUR BLOG! So now we can really say whatever we want about her!

C and R make our way down to the stands opposite the Stanford bench, where our other friend, N is seated. Let’s call her coach N, because she is the head coach of our little girl’s basketball team. She was at the game with her daughter, sister, and nieces. C and R did notice they were throwing shirts every time we made a three-pointer to the same section, the one where they were sitting, and we hoped our girls would be the recipients of this bounty. Sure enough they had shirts! Atta girls.

Then coach N said to a very tall man, "This is the one that started the tinkle bells!"

The very tall man stuck out his hand and said, "Hi, I’m Wayne Tinkle, Joslyn’s dad." C and R shook his hands and were in heaven. Wayne was so nice and warm and friendly. He also is the head coach of the men’s basketball team at Montana, and he had such an easy rapport with us, with the kids, we can bet he is great with his team. His team is playing Sacramento State this weekend and he flew here to see this game, coach his team Friday, then see another of Joslyn’s game Saturday. Cool!

We told him we just heard it is illegal to bring noisemakers to the game so we would be honored to be the first ones thrown out for tinkle bells. He appreciated our rebel spirit. We tell him that someone heard the bells and instead of saying Tinkle, she said Jingle and he likes that nickname, too. We gave him his very own tinkle bell, because what good Stanford basketball fan doesn’t carry around a plastic bag full of bells, and he promised to ring it Saturday, and ain’t nobody throwing out Tinkle’s dad!

Then he said his wife reads our blogs and so we want to give a warm California shout out to Mrs. Tinkle, a former DI basketball player herself. Your daughter is enjoying her stay in our fair state and she really didn’t land that hard on the floor like we said in the beginning of this loooong post. She was fine, absolutely fine. Bounced right back up, don’t you worry. Everything’s fine! Boy, she can shoot a mean three!

Anyway, bring you banned tinkle bells to honor Joslyn and Mr. Tinkle to the Washington game on Saturday. C’s got extra if you need them. Kids get in for a buck with a paid adult admission. We are bringing most of our little girl’s team after our game. See ya there!