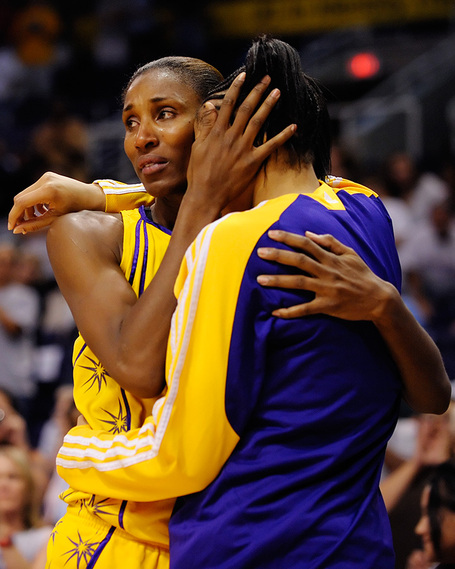 When my sister was in fourth grade, just before the 1996 Atlanta Olympics, she took up playing basketball.

As her tenth grade older brother who had just made varsity basketball at my high school, I was of course excited – I volunteered to be the assistant coach of her team (which was a nice way to get community service hours) and I was just thrilled at the idea that my sister and I could share basketball with one another.

Well, that only lasted a year (as did many of her interests) – to be honest, she was not very good at basketball and was actually much better at soccer. My younger brother and I both played soccer as well and she always enjoyed playing that with us more than basketball – she had amazing speed and a strong left foot (which we take credit for as the result of her kicking us during our many wrestling matches).

So having rejected basketball years before, I was quite surprised to come home from college a few years later to hear her raving about Los Angeles Sparks center Lisa Leslie’s book, Lisa Leslie: Queen of the Court. Even though her sport was soccer, she wanted to be Leslie and seemed to know more than I did about her during that particular phase in her life.

She was especially impressed by Leslie’s brief stint as a model (and has since become as obsessed with fashion as I am with basketball). Perhaps even more interesting, at that time, the WNBA had just started and Leslie wasn’t quite as big a mainstream star with Houston Comets guard Cynthia Cooper dominating the league.

But that’s what makes her story all the more interesting when thinking about the extent of Leslie's legend.

My sister came of age as a young athlete during one of the most significant booms in the history of women’s sports – the 1996 Olympics, the creation of the WNBA, and the rise to celebrity status of both Leslie and soccer star Mia Hamm.

With a growing number of female athletes to latch onto, what would make Leslie particularly appealing to my sister who ditched basketball in favor of soccer?

As such, when I think about Leslie’s legacy, it’s not only about what she’s done on the court, or off the court as an ambassador for the WNBA and women’s basketball, but also what she meant to my sister as a black woman.

As a relatively new WNBA fan, the thing that immediately strikes me about Leslie is that she is really the only player that "outsiders" readily recognize.

That is probably changing now with Sparks teammate Candace Parker being the obvious heir to Leslie as the face of the WNBA (not to mention having an NBA husband), but for years the only names people could come up with were Leslie, Sheryl Swoopes (for being labeled the female Michael Jordan), and possibly Cynthia Cooper or Chamique Holdsclaw depending on who you talk to.

Therefore, it perplexes me that some longtime WNBA fans would choose to demean or dismiss Leslie as she heads into retirement: she has carried the sport in many ways while those other names have either faded or come in and out of the game (for various perfectly understandable reasons). In some ways -- fair or not -- she keeps the league alive in the consciousness of the (male dominated) sports world.

However, what I appreciate most about Leslie is that she has never shied away from the cultural impact of being part of one of the longest standing women’s professional sports leagues in the U.S. Whether we entirely agree with what she has said over time or how she frames femininity in sports, she has always embraced her role as a role model to girls like my sister, whether they play basketball or not.

Her importance as a role model was underscored when First Lady Michelle Obama invited Leslie to the White House as part of an extended Women’s History Month event in March. Leslie was included among some very accomplished women:

"Our job is simple: just be open, be honest, be real, be clear and have fun," Mrs. Obama told the group, which gathered in the Diplomatic Reception Room of the White House for the event, part of the first lady’s celebration of March as Women’s History Month.

Regardless of what you think about Leslie the Sparks center, I do not think it’s an overstatement to say that a large part of Leslie’s legacy is her standing as one of the most culturally significant women of our time: a visible beneficiary of Title IX, a mainstream representation of an educated black woman, and -- as a pioneering female athlete and tough post player in what has traditionally been a "man’s sport" in the U.S. – a challenge to traditional gender roles.

Unfortunately, the reality is that as a society, we have not had enough mainstream representations of successful black females, much less black female professional athletes. For a woman like my mother – a college educated black professional who grew up in Washington, D.C. during the civil rights movement – it was critical to find every single representation she could for her daughter. Lisa Leslie was one of them.

I know my sister is an extremely small sample size of one. But watching her grow up as she has and thinking about the importance of Leslie to her development, the most significant part of Leslie’s legacy to me will always be her broader cultural significance as a role model for girls like my sister.