MVDee 2009: The Case for Diana Taurasi as WNBA MVP

Share All sharing options for: MVDee 2009: The Case for Diana Taurasi as WNBA MVP 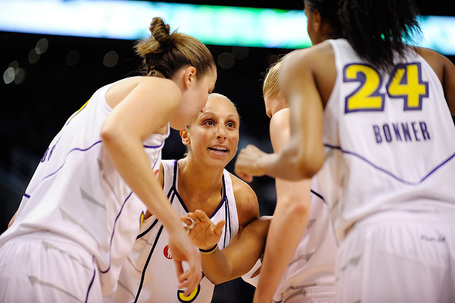 (Photo by by Craig Bennett)

Diana Taurasi’s fourth consecutive All-WNBA first team selection is strong evidence to support the claim that she is among the league’s most outstanding players.

Not that being the most "outstanding" player is synonymous with the most "valuable" player, but Taurasi is a perennial WNBA Most Valuable Player candidate who has put together a strong case for winning the award this season.

Really, although the Mercury missed the playoffs last season I made the (generally unpersuasive) argument that the Phoenix Mercury’s 16 wins made for a strong case for her to win last season’s most valuable player award, if you define it as the player whose team could least afford to lose her. It’s a simple argument really -- the Mercury would not have won half of the 16 games they won last season without Diana Taurasi.

Now, as the Phoenix Mercury try to send Los Angeles Sparks center Lisa Leslie into retirement with a win in Game 2 of the Western Conference Finals tonight, Taurasi should have a much more persuasive argument for the MVP award this season.

Not only did the Mercury put together the league’s best regular season record this season, but Taurasi also:

In other words, Taurasi was one of the most well-rounded, efficient, and successful players this season. It’s really difficult to make an argument against her…but there are other deserving candidates.

What about her All-WNBA first team teammate Cappie Pondexter who was a nightly triple-double threat?

What about Defensive Player of the Year Tamika Catchings who led the Indiana Fever to the second best record in the WNBA…or for that matter, Catchings’ Fever teammate Katie Douglas?

And what about the other All-WNBA players, like guards Becky Hammon and Deanna Nolan – who were arguably the most significant reasons for their teams making the playoffs – or players like Lauren Jackson, Lisa Leslie, or Candace Parker who missed a number of games but clearly elevated their teams’ games when they were in?

Even relative to the performance of the other All-WNBA players, Taurasi has among the strongest arguments for the MVP award.

Separating Taurasi from Pondexter almost feels like an act of futility; they have each made huge, yet different contributions to the Mercury’s success this season. On one hand, Taurasi is clearly the more efficient scorer, but on the other hand Pondexter has been the best in the league this season with the ball in her hands, as described by Phoenix Stan on BrightSideoftheSun.

With the clock winding down you always (always) see the ball in Cappie's hands and that's because there is no one better in the league at breaking down her defender and getting to the rim. She leads the team in free throw attempts (where she is shooting 89%) as she is almost always drawing a help defender. If the defense does collapse quickly she can pull up and hit a mid-range shot in the defenders face or she can find an open teammate. She's second in the league with 5 assists per game despite not playing big minutes at the point. Think Dwayne Wade if you are looking for an NBA comparison.

Nevertheless, Stan ultimately gave Taurasi the edge because of her ability on the defensive end of the floor and it’s hard to dispute that.

While Pondexter might be the go to player on the offensive end, Taurasi anchors the team defensively. Considering that a major reason for the team’s increased pace this season is defensive rebounding, Taurasi’s defensive ability – though not stellar – is among the main reasons why the team is playing so well this season.

However, if part of the argument in favor of Taurasi is what she does aside from when she has the ball in her hands then we have to consider her relative to Catchings, the league’s Defensive Player of the Year.

What about Defensive Player of the Year Tamika Catchings who led the Indiana Fever to the second best record in the WNBA?

If we were to base the MVP award purely on statistics and use David Sparks’ Boxscores metric as the measure for the MVP, Catchings would absolutely be the choice for MVP.

Catchings not only had the highest Boxscore this season, but she also had the largest differential between her Boxscore and her closest teammate (Katie Douglas), which was a large part of the argument I made in favor of Taurasi last season.

Adding this to the fact that she was clearly the best perimeter defender in the league, Catchings could make a very strong case for the MVP award.

However, if we consider a broader statistical standard that takes account for a player’s ability to create scoring opportunities and score efficiently, then Taurasi has a clear advantage over Catchings. If we measure the ability to create scoring opportunities and do so efficiently while making a contribution to team wins by usage%, Chaiken efficiency ratio, and Boxscores, Taurasi is clearly the most dangerous scorer in the league with the ball in her hands because she can score in so many ways and do so efficiently.

Furthermore, there are only 13 players in the league who rank in the top tier of the league in all three categories.

Catchings is not on that list, which obviously does not mean she is unworthy as a player – it simply reinforces the argument for Taurasi as the best offensive player in the league, well beyond that of Catchings.

What most hurts Catchings is her efficiency: her usage% is slightly above league average and her 2 point percentage – among the more important statistics in WNBA basketball – is just below league average at 41% (Taurasi ended the season at 50.41%).

While one could make the argument for Catchings on the basis of defense, defense is a team effort (just ask Minnesota Lynx center Nicky Anosike) and within the Mercury’s defensive scheme, Taurasi is one of the most valuable defensive players in the league. And even as an individual defender, Taurasi is definitely in the league’s top tier on the strength of her off the ball defense.

And what about the other All-WNBA players: like Catchings’ teammate Douglas, like guards Becky Hammon and Deanna Nolan – who were arguably the most significant reasons for their teams making the playoffs – or players like Lauren Jackson, Lisa Leslie, or Candace Parker who missed a number of games but clearly elevated their teams’ games when they were in?