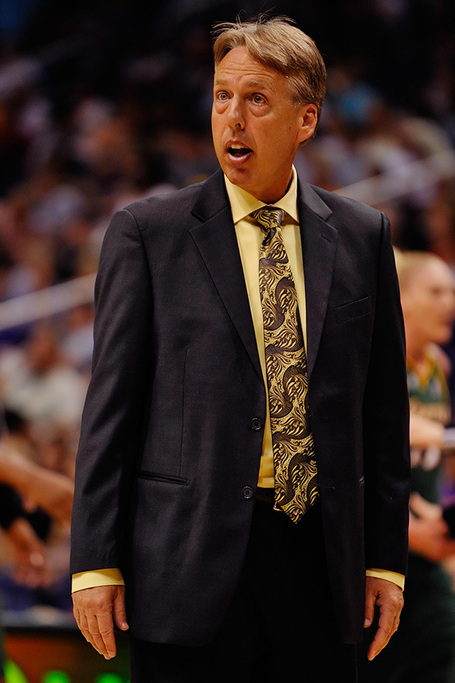 After a 92-84 overtime loss to the Phoenix Mercury in their final home game of the season, Seattle Storm guard Tanisha Wright made a comment that exemplifies the Storm’s approach to adversity all season.

"I think any time we step on the court, no matter who’s on the court with us, you expect to play a game and expect to win a game," said Wright in response to a question about whether she was surprised that they played the Mercury close with three players injured and forward Swin Cash out for family reasons. "So no, it doesn’t surprise me that it was close."

There were plenty of reasons for this team to wilt in the face of the unforeseen circumstances: losing one of the best players in the world while figuring out how to manage a reduced roster size and then facing the challenge of winning two playoff games in a row against a peaking team of Olympians.

Yet even in situations when excuses would have been perfectly justifiable, this team – to a player -- refused to make them. Moreover, it never even seemed to occur to them that they were supposed to lose, supposed to lose playoff position, or supposed to fail given the circumstances.

In fact, in the face of adversity, the team seemed to step up rather than back down, finding ways to compete even when the resources to do so seemed scarce. Even in defeat, there was never an outward display of despair.

Officiating aside, one could argue that the Storm’s 6 for 30 shooting in the first half of Sunday’s game 3 against the Los Angeles Sparks was simply a matter of running out of gas after trying to make due on fumes for so long. "The Play" in game 2 could be considered the team’s last gasp, the last win they could muster of this season of hardships. And yet as guard Sue Bird said after the game, "We just never stop fighting."

So in reflecting on my first full season covering and watching the Seattle Storm in Key Arena, it is the Storm’s resilience that stands out as the defining characteristic.

"I think that what this team has gone through here in the last four weeks with injuries and other issues – people being away and bringing in replacement players – and at the same time maintaining our standing and getting the second seed was sort of remarkable for what we had to go through, people we were missing," said coach Brian Agler after their 75-64 loss to the Los Angeles Sparks in a deciding game 3 of the first round of the WNBA playoffs on Sunday afternoon.

"It’s just a tribute to those players," Agler continued. "They play well together, they got a great chemistry, there’s a camaraderie there. There’s a lot of confidence in each other and it’s just really a pleasure to be a part of."

While the Storm’s resilience in the face of adversity is impressive, the challenges they faced throughout the season also seem to embody some much broader dilemmas that the WNBA will have to evaluate as the league continues to move forward, most prominently the 11-player roster. While there have been plenty of thoughts about the reduced rosters from fans and media, I recently had the opportunity to ask some Storm executives.

The 11-player roster: "Doesn’t leave a whole lot of margin for error"

For a team that eventually had to bring back two replacement players that they cut in training camp to adhere to the 11-player roster limit, the reductions seem like an obvious excuse for the Storm.

"I would hope you would support who we are, not who we are not…This is your team"

John Altavilla of the Hartford Courant wrote that the 11-player roster was the "worst decision ever made", costing players jobs, making life impossible for coaches, and hurting the overall quality of play of the game. However, I tend to disagree for two reasons.

First, to clarify what I’ve previously written on the issue, I would argue that there is no evidence that the roster reductions had an adverse impact on the overall quality of play of the WNBA <i>this season</i> (it remains to be seen what long-term impacts it may have. Though I don’t personally have much experience with the league, aren’t people claiming this is the best season yet?

Second, I tend to stand with Helen of the Women’s Hoop Blog about the decision being a difficult, but necessary decision for the league to make:

…if the 11 player roster helps keep the W alive through this recession, suck it up, coaches, players, fans, reporters, or else.... If these decisions mean the W has a future, I have to support it.

The same way I will support my Liberty, even if Blaze continues as the GM, by renewing my subscription.

'Cause tough decisions have to be made if I want to help make sure the league continues.

Since media members are usually merely speculating without knowing the day-to-day experience of managing these circumstances, I wondered what the people actually responsible for operating the Storm thought. While I acknowledge that they have to be careful about what they say publicly, there was certainly more optimism in their responses than Altavilla’s.

"It’s interesting how much we learned to appreciate that 12th and 13th roster spot in the prior season in terms of that flexibility it gave you," said Storm President and CEO Karen Bryant just before the Storm’s final home game against the Mercury. "I think 11 players, when you know you need ten to practice, is a tight squad and doesn’t leave a whole lot of margin for error in terms of injuries…It will be interesting to see if there’s something we re-evaluate or not.

"It’s definitely presented some challenges, especially when you consider injuries are part of the game," Bryant continued. "Very few teams are going to go through a WNBA season without an injury and certainly to have injuries at this point in the season is really unfortunate but it’s part of the game and you have to respond. But I know we did that for fiscal reasons across the league."

Although both Bryant and Agler seemed to speak to the need to re-evaluate the policy due to the limited "margin for error", Agler alluded to the point that teams will have to change how they do things.

"I think going through the first year of a mandatory 11 person roster, I think all the teams are going to re-evaluate how they do things," said Agler after Sunday’s loss. "Now, do I have the answer right now? No I don’t. But I think we will study it and think about how to balance that thing out and how to have the opportunity to be creative when you need to be creative bringing players in. "

It’s certainly reasonable to say that some teams may have had some trouble adjusting to the policy due to injuries or players arriving late from overseas and needing to make mid-season roster moves that would not have been necessary otherwise. However, as Agler said, that may just necessitate executives being creative about how they manage their rosters, not reversing a policy made "for fiscal reasons across the league."

None of us have the answer to any of that from this vantage point, good of bad.

In addition to the fact that the officiating was so poor in game 3 that a do-over seems mandatory and reparations for time lost in my life would be reasonable, people following the Storm could certainly look at 6 consecutive playoff exits – and the second consecutive exit following an injury-riddled season – as symptomatic of a problem with the 3-game playoff system.

"I think any coach – or any team -- that loses out in a three game series, they’re gonna say, ‘Oh well, we wish it would’ve gone five’," said Agler on Sunday. "So I think there will be continual dialogue with that. Whether it changes or not, I don’t know."

The problem is that there’s no easy way to address the reasons why the 3-game playoff is a reality in the first place.

"It enters thought process every day but I’m not making the decision on that," said Agler. "There’s always dialogue at the league meetings. I think there’s a lot of factors that play into that other than just ‘OK, we’re going to have a three game series.’ I think there’s travel, I think there’s TV – TV is a big part of the league and getting these games on are important."

There are professional sports leagues elsewhere in the world that have other playoff formats – one and done, round robins, or a series of games at common sites – however those leagues have more teams and larger fan bases which means (you guessed it) less fiscal anxiety. Nevertheless, it would be interesting to know more about what that dialogue at meetings sounds like and what creative alternatives have been proposed or debated.

Retirement from the WNBA, not basketball

I recently heard a friend say, "Of course Shannon Johnson is retiring – she’s like 50."

And Johnson’s "50"-year-old self is actually not retiring from basketball, but the WNBA – she will continue to play in Europe.

Since Johnson announced her retirement, I’ve heard multiple people express concern about players choosing to leave the WNBA to play basketball overseas because a) it shortens one's career to be playing professional basketball year-round and b) players make more money overseas.

There are already NBA players choosing to leave the U.S. mid-career to play overseas. As of yet, no all-star caliber player has done that at the peak of their career, but it’s difficult for a U.S. entity to compete with foreign entities given the current economy.

Johnson is certainly on the decline at this point in her career and this problem is by no means at crisis level. But you wonder what kinds of things the league is trying to do to address the problem.

"She's just a special person and great competitor," said Agler prior to game 2. "I think the league will miss her personality and competitiveness and leadership and her charisma."

"You play the hand that’s dealt"

Would the Storm’s post-season have been different with Lauren Jackson? Of course – she’s a force on both ends of the court. But realistically, no change in the quality of officiating, roster sizes, or playoff format could possibly make up for a loss that large.

What did make up for it during the season was the heart and tenacity of the Storm’s players this season.

It’s not that it’s surprising for a professional basketball team to refuse to make excuses, it’s that it showed up at various times throughout the season in their performance on the court. They found ways to adjust.

"It’s just not been an ideal situation," said Agler about the roster reductions prior to the final regular season home game of the season. "But it is what it is – you play the hand that’s dealt and you try to work through it."

Whether this is all a bunch of flowery public rhetoric or not is debatable, but as a first-year fan I found the Storm’s season to be as exciting as any professional basketball season I’ve followed.

"We had a great season in some ways," said Bird on Sunday. "We have a great group. I know people are going to have fond memories of this season."