Terrible Officiating Makes for an Ugly, Ugly Game 3 in Seattle

Share All sharing options for: Terrible Officiating Makes for an Ugly, Ugly Game 3 in Seattle 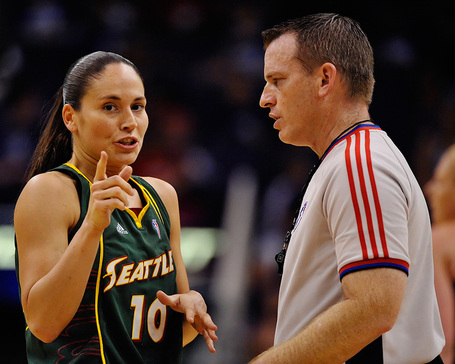 A good friend of mine says that a good waiter should never be "too noticeable", either by their inattentive absences or overbearing presence. Their job is to facilitate an enjoyable dining experience by anticipating what their patrons need.
Whether you entirely agree with his perspective, something similar could certainly be said about basketball referees – they should not have a noticeable influence on the game.

Good referees should neither allow a basketball game to devolve into a game of Bill Laimbeer’s Combat Basketball nor should they call the game like riot cops trying to impose order on a game that’s predicated on its fluidity. Their job should be to facilitate a fair game in which each team is able to compete to win based on their ability, within the agreed upon rules of the game.


What we witnessed in this afternoon’s decisive game 3 of the first round of the WNBA playoffs between the Seattle Storm and Los Angeles Sparks at Key Arena was a #RefFail. Officials Denise Brooks-Clauser, Roy Gulbeyan, and Kurt Walker most closely resembled the Joker of the Dark Knight variety – many of their calls were completely arbitrary, lacking any semblance of logic as a whole.

"You know, I just... do things…Introduce a little anarchy. Upset the established order, and everything becomes chaos. I'm an agent of chaos."

If they had just come out and said what the Joker sai8d to Two Face, at least we could attribute some intention to what occurred. Absent that, we can just say it was a poorly officiated game.

Basketball simply cannot be played under the conditions we saw this afternoon. That goes double for a decisive playoff game.

It’s a shame that Storm fans had to waste a rare sunny afternoon in Seattle to witness their team’s season come to an end in such ugly fashion.

It’s a shame that Storm guard Shannon Johnson was sent off into retirement in that fashion.

Even worse, it’s a shame that the officials were responsible for such an ugly, ugly nationally televised game that the WNBA quite honestly cannot afford.

Of course, the officiating does not excuse the Storm’s 20% shooting on 6 of 30 field goal attempts in the first half, as coach Brian Agler mentioned.

"I don’t really have any comment on the officiating," said Agler. "I just felt like we struggled to score for periods of time and I think LA had a lot to do with that – I really thought they came in and played well. They controlled the game early and as hard and competitive as we tried to play we just could not get the game going the way we wanted."

So bear in mind that this is not to say that the referees are to blame for the Storm’s loss – ever since I started playing organized basketball in 4th grade my father has repeated his mantra about refs enough times that it is now imprinted in my mind: <i>you never blame refs for a loss because if you were good enough you would have found a way to win despite the refs.</i> Sparks coach Michael Cooper echoed a similar sentiment:

"The officiating was what it was it was," said Sparks coach Michael Cooper. "We just had to work around it and play through it and we got some people in early foul trouble – I think Tina (Thompson) and ‘Smooth’ (Lisa Leslie) had three early fouls – and you just have to work around those situations. And some people on their side got into early foul trouble. So, you can’t tell how the officials are going to call the game; you just have to play hard and be smart about how they’re calling the calls."

That said, I can say with confidence that the refs influenced the ugly character of the game.

The writer next to me leaned over early in the game and said that we’d eventually be playing 3-on-3 if the calls kept up at the pace they were going in the first quarter.

After one quarter, both Sparks forward Tina Thompson and Storm guard Tanisha Wright had three fouls and three other players in the game had two. Wright picked up her third foul with 5:34 left in the first quarter on a call that defies any sort of logical explanation.

The 5’11 Wright was in between a number of Sparks post players – remember, we’re talking players standing 6’5", 6’4" and 6’2" – and picked up a loose ball foul literally for jumping up and attempting to go for the rebound. I checked with those around me and everyone in Key Arena saw the replay – I don’t have 20/20 vision, but it didn’t even looked like she tried to touch anyone; the contact occurred simply from her jumping to try for the rebound.

Wright picked up her fourth foul with 5:16 left in the second quarter on an offensive foul that was slightly less absurd, but absurd nonetheless. And it wasn’t just the Storm that were victimized – Sparks guard Noelle Quinn was called for a bad offensive foul with 4:38 left in the third and a few of the calls made against Lisa Leslie were phantom calls.

"You know officiating is one of those things where of course it has an impact on the game but it’s out of your hands," said Storm guard Sue Bird. "Were some of them ticky-tack? Probably. But you have to adjust. You’re not going to be able to control what they call. No ref is going to reverse a call -- it’s just not going to happen. So you have to play through it. So it’s a part of the game that you just have to deal with.

Nevertheless, regardless of which team you’re rooting for, such inconsistent officiating results in a choppy game that is almost rendered unwatchable, no matter what basketball league it is. Yes, WNBA fans do spend a lot of time whining about the officiating and yes officiating is an extremely tough job. But the WNBA cannot afford its product to be ruined in the way it was by the officials in a nationally televised game.

More to come on the game and the series later...

WNBA officials contemplating the NBA: "Wait 'till they get a load of me..."