Phoenix Mercury rookie guard/forward DeWanna Bonner has been voted the WNBA's Sixth Woman of the Year.

It is an impressive feat for a rookie and certainly well deserved.

Bonner has brought energy to the Mercury all season, rebounding and scoring off the bench. And as the athletic Bonner develops her outside shot and refines her ability to finish and improves her understanding of the game on the defensive (which is normal develop for any young player), we can reasonably expect more awards from her in the future.

I made my case for Bonner for Rookie of the Year and everything I said there applies to her winning this award as well. Here's her impressive numbers:

Bonner to be named WNBA Sixth Woman of the Year
Bonner, the fifth pick of the 2009 draft out of Auburn, played in every game in the regular season where she averaged 11.2 points and 5.8 rebounds in 21.3 minutes. Bonner also recorded five double-doubles this season.

DeWanna has not only proven herself on the court but she's also fit in perfectly with a Mercury team filled with big personalities and star players. She's a outstanding young woman and a lot of fun to be around. She represents the team and league well and happens to be my kids' favorite player. I think that is important in a league like the WNBA that's trying to establish a tradition of support.

Coach Gaines always insisted that Bonner would have been his selection even if the Mercury had the first pick in the draft. He had this to say about his young, athletic player's ability to contribute outside the set offense, "You can call it garbage points but those garbage points are the biggest points in the game. Those are points that are like X factors outside your offense. She gets a lot of those all the time. Offensive rebounds. Steals. Hustle points. She runs down and rebounds all the time and when she gets her chance you know, she gets her shots."

Here's one of my favorite pictures of DeWanna's jump shot. Arms and legs going every which way.... 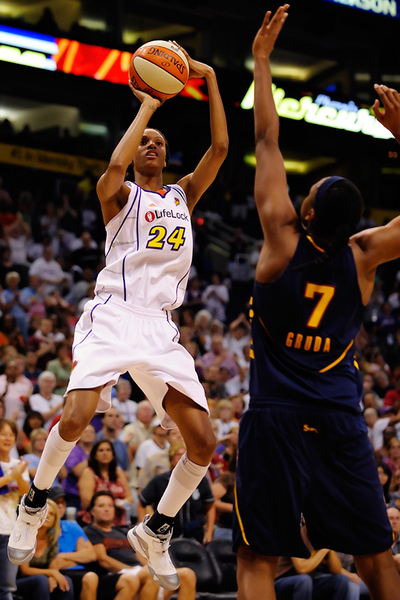 Here's another that shows her athletic ability attacking the rim 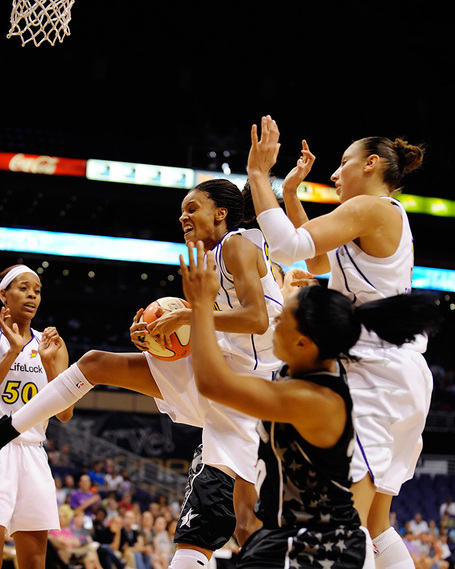