Share All sharing options for: Tia Jackson Greets University of Washington Fans at Key Arena: "A Defining Year" in a "New Era" 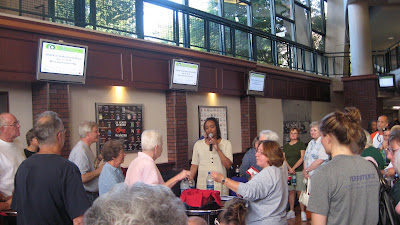 It did not occur to me that there were almost 70 people at the University of Washington women’s basketball gathering at Key Arena last night until head coach Tia Jackson called the group together for her remarks about the team.

"Come on, get closer," said Jackson with a casual and unassuming demeanor, before saying something to the effect of I won't bite.

After dispensing with the formalities of making small talk with the crowd of season ticket holders donning a mix of Storm gear and civilian clothing, she moved into the business of discussing the team. She introduced the players accompanying her – guard/forwards Kristi Kingma and Sami Whitcomb and center Regina Rogers -- and then went into some more formal remarks and Q&A for about 15 minutes.

The event took place in the northwest corner of Key Arena just behind section 111 about 30 minutes before the Seattle Storm clinched a playoff berth with an ugly 86-74 victory over the Connecticut Sun.

But one thing that can be said about Jackson: she’s honest while simultaneously maintaining a positive tone about some potentially trying circumstances. Expectations for this team are low after finishing last place in the Pac-10 in Jackson’s third season last year and this season will be about searching for bright spots as the team tries to escape the cellar.

I am intent on following women’s college basketball this season and UW will likely be my gateway into the Pac-10. Since I was already planning to be at Key Arena to watch Lindsay Whalen with Shoals, I figured I’d drop by Jackson’s chat just to get a sense of where the team is coming from and whether there are any particularly interesting story lines to follow and get excited about.

Of course, a pre-season talk for a team with low expectations is going to be more about cultivating faith than enabling hope. But that’s part of what I like about college basketball: although some people may find it depressing to watch a losing team full of players who will probably "go pro in something other than sports", I actually enjoy it.

At it’s best it becomes basketball for the sake of basketball, with the added incentive of a fully funded college degree. I will always like the pros more, but the sappy side of me cannot avoid folks playing for pride while getting an education.

Seventy percent of the UW team has been around during the summer, sophomore forward Liz Lay has "lost 26 pounds and looking remarkable", and Jackson is also excited about recruiting -- UW has two early commitments from the state of Washington and one from California.

Another emerging bright spot entering the season is point guard Christina Rozier who started 19 games last year, but wasn’t in shape so it took her awhile to find her rhythm. She’s worked in the off-season to get in shape, is in "extremely good shape" right now and is looking forward to being a larger contributor this year.

However, the most intriguing bright spot for the team this season is undoubtedly Rogers, a 6’3" transfer from UCLA who is returned home to Seattle for family reasons. The former McDonald’s All-American who received an honorable mention on Pac-10 All-Freshman team is expected to make an impact this season after red-shirting last season.

"If you just take a look to your left," Jackson said, referring to Rogers amidst laughter in response to a fan’s question about expected changes in offensive philosophy, "I think that should sum it up right there."

Rogers exudes confidence in speaking about her own game and Jackson spoke briefly about some of the things she brings to the team in addition to a large physical presence.

"She’s probably one of the most physical players…at UCLA in her freshman year, she ate us alive," said Jackson, referring to a January 2008 game. "I thought she would score over her right shoulder, we jumped over there and she didn’t care – she said, ‘Ok, I’ll just stay here.’ And she ate us alive."

Rogers may not really have eaten UW alive that game, only scoring 6 points and grabbing 3 boards off the bench. Nevertheless, she will be interesting to watch for me because she represents the type of player and attitude that many people don’t expect from women’s basketball – the dominant physical player who looks to over power opponents rather than out-finesse them.

Even if Washington ends up struggling to define themselves again this year in this new era, I find the transition of Rogers into a major contributor on the team to be a compelling story and worth watching.

The main reason I went to last night’s game was to get a glimpse of Connecticut Sun guard Lindsay Whalen and even in a loss, I still believe she’s the best point guard in the country not playing for Russia. So congrats to Whalen for making the national team. It’s about damn time…

Shoals came to the game as well and posted about Whalen and the WNBA on his blog FreeDarko.com. Could more players like Whalen attract more people to the WNBA? I don't know. I’ll have more to say about Whalen tomorrow.