Rookie Rankings: A Resolution for the ROY Debate

Share All sharing options for: Rookie Rankings: A Resolution for the ROY Debate

(Originally posted at Rethinking Basketball on 09/08/09) 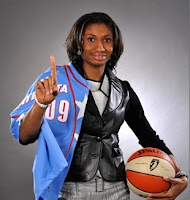 After the Phoenix Mercury’s 100-82 victory over the Atlanta Dream on Saturday, Phoenix Stan declared Mercury forward DeWanna Bonner Rookie of the Year.

Before you dismiss Stan as a biased Mercury writer, the argument he lays out in favor of Bonner over Dream forward Angel McCoughtry is quite strong, especially the part about consistency. After all – and forgive me for being so semantic – but the award is for the Rookie of the Year, not Rookie of the Post-All-Star Break or Rookie of the Future. The year, as in this year.

For most of the season, I have argued something similar – that although McCoughtry strikes me as the more player with more star potential, Bonner is clearly the most productive rookie in the league, if for no other reason than her style of play fits perfectly with the Mercury’s style.

However, over the last month or so, that claim has been proven wrong – these are both very productive, very talented players, with bright futures, that are best compared as "different" rather than judging one as superior. And of course, the award is irrelevant to the young players themselves, as reported by Stan – all they care about is winning (which I suppose is a shame because if one of them didn’t care about winning it would be quite easy to choose between the two of them).

So given that, it probably should come as no surprise that the numbers reveal something different after McCoughtry’s consecutive Rookie of the Month awards: Bonner and McCoughtry are almost even now based on the framework of analysis I have used for rookies this season.

That pretty much negates the consistency argument – even if McCoughtry was not great during the first half of the season, the fact that she has drawn even with (or arguably surpassed) Bonner statistically means one of the following:

a) Bonner’s rate of production has declined, as McCoughtry’s minutes increased

b) McCoughtry has made up statistical ground so rapidly that she must be the superior player, or

With the consistency piece negated, it becomes much more difficult to determine who should win Rookie of the Year. WNBA.com makes an unconvincing argument for McCoughtry by citing one game, which is insufficient because the award is for performance for the duration of the season.

Most of the performance metrics – Efficiency, Tendex, and Model Estimated Value (I don’t have PER or WARP) – are too close to make a clear assessment. So it will probably come down to each individual voter selecting the person they just like better.

Nevertheless, I want to find an argument that goes beyond merely arbitrary. In doing so, I think there might be another variable that points to a resolution – since both of these players have been reserves for most of the season, they are also eligible for the Sixth Woman award.

In evaluating rookies this season, I’ve used the following standard for analysis based upon observation and the statistical work of others:

The best rookies can create their own scoring opportunities – and do so efficiently – while contributing to a team’s success.

As such, I’ve used a combination of three statistics – usage rate (the rate at which a player creates plays for themselves), Chaiken efficiency ratio (the ratio of scoring plays a player is individually responsible for vs. turnovers and missed shots), and Boxscores (a player’s individual to team wins).

As it has been for months now, Bonner and McCoughtry have been the only two rookies to rank in the top tier of the league in all three statistical categories. Just to establish the significance of that accomplishment, there are only 15 players – All-Stars and MVP candidates -- in the entire league who share that distinction. It makes it an impressive standard by which to judge rookies.
The numbers are as follows:

While Bonner is slightly more efficient and contributed slightly more to her team’s success, McCoughtry is more effective at creating plays for herself.

And the latter point about McCoughtry is what swings my opinion in favor of McCoughtry: she’s a playmaker, while Bonner is still primarily a player who is dependent on the players around her to set her up.

Yes, Bonner’s playmaking ability has improved, but McCoughtry is clearly the better playmaker. Or to put it in Jeopardy terms, McCoughtry is probably the answer to the question, "Which rookie would you want to have the ball in her hands at the end of a game?" McCoughtry is that type of player that can create plays for herself and others when her team needs it.

McCoughtry has demonstrated the ability to take over games in addition to putting up statistics almost equivalent to those of Bonner.

Although the Dream have only gone 3-4 with McCoughtry replacing forward Chamique Holdsclaw in the lineup over the last 7 games, it’s worth nothing that 5 of those games were road games and the losses were to Los Angeles, Phoenix, Detroit, and Seattle – teams that were all hot when the Dream encountered them.

So when we consider which rookie is better, yes, it’s worth considering which rookie has demonstrated the ability to clearly dominate a game and carry her team to victory. It’s an intangible that we cannot measure statistically, but I think we have to agree that McCoughtry has more of "it" however you want to define that "It Factor".

But with these two players being the best two reserves by my rookie standard -- which is really just a playmaking ability standard – I think it’s fair to say that one of them is probably the Sixth Woman of the Year as well.

The reason is simple and less arbitrary than merely finding a way to reward Bonner for what she’s done. If we consider that the bulk of McCoughtry’s production this season has been as a starter, then it’s easy to claim that Bonner has been the better reserve. She has consistently brought more off the bench than any player in the league, while McCoughtry has emerged as clearly the most dominant rookie starter.

So yeah, ultimately that does look like a compromise, but I think it’s the reasonable way to go.

Here’s my ranking of the rest of the rookies, with statistical backing:

I really like Zellous’ game and over the course of the season her shot selection has improved and she looks like she’s playing much more under control as the Shock have settled into life after Bill. Statistically, she’s also the third best defender behind Bonner and McCoughtry. As has been the case all season, she still gets to the free throw line at a higher rate than anyone else in the league. If she can work on her playmaking ability in the offseason, she’ll be a dynamic second year player.

The consistency argument in comparison to Zellous (and defensive ability) is what has Jekabsone in the 4th spot as opposed to #3. But in terms of offensive ability, she is probably one of the most well rounded and polished rookies of any. She doesn’t have the same type of game-changing ability that McCoughtry does, but on the other hand there isn’t much she cannot do.

Montgomery is not the best rookie point guard in terms of making plays for others, but she is by far the most dynamic rookie point guard with her ball handling ability and ability to take opponents off the dribble, as evidenced by her top tier 2 point percentage.

6. Briann January (I’m partial to point guards, but she has demonstrated ability to lead her team as well as any other rookie)

7. Courtney Paris (needs more post moves, but still one of the best rebounders in the league)

8. Quanitra Hollingsworth (among the best rebounders in the league and working on scoring ability)

9. Shalee Lehning (the only way you could argue against her being among the top rookies is if you are drinking a large glass of haterade. Even by the rather weak standard of EFF, available at WNBA.com, she’s #9. I could say more, but I think I’ve made the point by now).

10. Kristi Toliver (if she played more…I would put her higher. But this is not a judgment of talent, but production)