Washington Still Focusing On Themselves With DeHaan, Michigan State Looming

Share All sharing options for: Washington Still Focusing On Themselves With DeHaan, Michigan State Looming

There’s no confusion about what the University of Washington is going to get when they show up at the Breslin Center in Lansing tonight at 7pm EST to face the Michigan State Spartans.

The Spartans are a tough team playing in a hostile environment that probably wants no part of being the next team to add their name to the list of early season upsets as 2009 comes to a close.

"We know that Michigan State is a pretty tough team –obviously they were picked to finish second in the country early on in some polls," said guard Kristi Kingma on media day this past Tuesday. "So we know that they’re gonna bring their A-game, they’re definitely not looking to lose to us. We know that they’re just a tough team: they trash talk, they rebound hard, they crash hard. We just have to be ready to go into their gym – we probably won’t get very many calls for us. Just go in with our right mindset."

Indeed MSU presents a daunting challenge. With improving 6'9" center Allyssa DeHaan in the middle, most teams have to pack it in to neutralize her impact on the game. However, when Florida Gulf Coast University packed it in, everybody on the Spartans -- including DeHaan -- seemed to start raining threes on them, making a school record 13 on the game.

Michigan State women hit 13 3-pointers, cruise past Florida Gulf Coast at home | MSU Spartans - - MLive.com
"Our game plan was the pack it in, letting players shoot that don’t have high percentages, and right out the gate, they hit one shot after another," Florida Gulf Coast head coach Karl Smesko said. "They caught us off guard, shocked us and we weren’t active (defensively) and their quick start had a bigger impact they carried all the way to halftime.

However, adding a small measure of uncertainty to the situation is the fact that Michigan State is not exactly a model of consistency: they have a bad habit of playing to the level of their competition.

No. 16/20 Spartans Host Washington Saturday Night at Breslin - MICHIGAN STATE OFFICIAL ATHLETIC SITE
STEPPING UP AGAINST THE NATION'S BEST Senior Allyssa DeHaan has played her best basketball this season against the Spartans' best competition. In MSU's games this season against teams receiving votes in the national polls, DeHaan is averaging 19.8 points, 8.0 rebounds and 4.5 blocks in only 27.5 minutes per game, while shooting 53.8% from the field and 85.2% from the line. On the flip side, in the remaining games, DeHaan is averaging only 8.2 points, 6.2 rebounds and 3.3 blocks in 21.0 minutes, while shooting 33.9% from the field.

After their upset victory over Xavier University last week, it was 6’9" center Allyssa DeHaan who both stepped up her game and identified the need to continue playing their best every game.

American Chronicle | Allyssa DeHaan scores 22 in upset for Michigan State
Perhaps the key for the Michigan State women's basketball team is to play a ranked opponent every game. MSU followed a dismal performance in losing to Indiana with a thorough domination of No. 8 Xavier, 66-53, on Wednesday night at the Breslin Center. "We play big against big teams," said Allyssa DeHaan. "We need to play like this every single game, no matter our competition."

While the possibility of the Spartans having a lapse and giving their guests an opportunity to challenge them at home might give Husky fans some hope, the UW team is focused on themselves.

The focus for Washington in a road game that few people will expect them to win is to keep doing what they’ve been doing all season: trying to find themselves and establish consistency in what they do, independent of the opponent.

"We think we have a really good opportunity on the road with both teams, particularly Michigan State because they are such a great team and nationally recognized as such," said senior guard Sami Whitcomb, referring to both the game against MSU and Tuesday’s game against Western Michigan. "I mean we just feel like if we focus on our defense and what we can do and executing against them – we try not to put too much focus on the other team and stuff because they’re going to do what they have to do regardless. But it’s what we can do to hopefully stop them and score against them."

For the Huskies, executing against Michigan State means both contending with DeHaan in the paint and figuring out how to get themselves high percentage shots despite DeHaan.

Kingma might have provided the most honest answer in response to the question of how she anticipates DeHaan affecting the game.

"Oh gosh," said Kingma before gathering her thoughts. "Obviously, you know -- 6’8" center -- she’s gonna try to block everything so I’m really not gonna be inside that much…for the most part being able to shot fake or, especially if she’s gonna commit, to look to other teammates."

It’s not a matter of fear as much as much as having a realistic game plan for how to handle a player who can dominate the game with her shot blocking ability – DeHaan is third all time in the NCAA with a 3.90 blocks per game average and is on pace to break the NCAA Division I blocked shots record. However, while guards like Kingma might try to avoid DeHaan, center Regina Rogers has no intention of backing down from the challenge.

"I know that she’s a great player," said Rogers who plans to use "a lot of pump fakes" against DeHaan, a sign of increasing comfort and patience in the post. "I know that she’s tall – one of the tallest players ever to play…She’s not as physical as me so playing more physical but without getting offensive fouls is something I’m really going to looking to do."

Although people who have watched DeHaan develop as a player in her time at Michigan State generally comment that she has gotten much more comfortable and less awkward with her movements in the post, contending with a heavier player with a lower center of gravity might be a challenge for DeHaan.

However, in order for Rogers to operate in the post, she has to get the ball. Getting the ball inside – and knocking down shots outside -- is something the Washington guards need to get better at doing.

"We just need to make better passes," said Whitcomb. "I feel like we definitely look, but we’re you know faking out and then passing it or just not giving it to her at the right time. So we need to see her faster, get the ball inside faster and do our part as guards to try and get some relief off of her by knocking down our shots. Then you can’t really double her."

While it may be difficult to start going into the post against a prolific shot blocker like DeHaan, it goes right back to the need for UW to establish a consistent style of play, game in and game out. It’s all part of the learning process that is made tougher by changes in personnel and injuries. 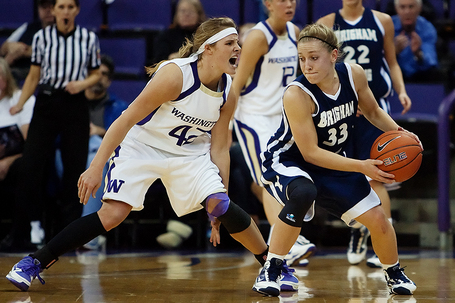